Matteo Palmer, Out of Nothing 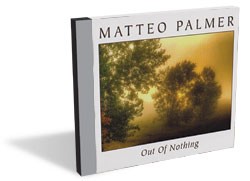 You could be forgiven if you’ve never heard of fingerstyle guitarist Matteo Palmer. Outside of his classmates at Vergennes Union High School, few have. Well, aside from Will Ackerman, that is.

Ackerman is the founder of Windham Hill Records, otherwise known as the most influential new-age record label on the planet. When he was a VUHS sophomore, Palmer, now 17, reached out to Ackerman, who lives in Dummerston, about playing a concert Palmer was coordinating to benefit the Vergennes Opera House. Ackerman agreed to play. At the show, he heard Palmer perform for the first time and presumably had the same reaction that anyone will who listens to the kid’s recently released debut album, Out of Nothing. To paraphrase: holy shit.

The next day, Ackerman approached Palmer about mentoring the teenager through the recording process. As something of a guru in acoustic and new-age circles, Ackerman is constantly approached by musicians seeking his guidance. For him to seek out Palmer speaks volumes about the young musician’s talent. And the album says everything else.

Through 50 minutes and 11 immaculately crafted instrumental compositions, Palmer’s near virtuosic skill is on display. If you can find a sour note, a clam or flub, you have better ears than mine — or Ackerman’s. Palmer plays with equal measures of elegance and energy, delivering fluid melody lines and hammering rich, percussive phrases that are stunning on a technical level.

But virtuosity can be its own worst enemy sometimes. To that point, what is most remarkable about Matteo Palmer is his sensitivity. Whether a result of Ackerman’s teaching or his own maturity, Palmer performs with a sense of humility and grace that might be the envy of many players two and three times his age. He is delicate and precise, his tone pure and beautiful. Every note he plays, every tap of the fret board, every bend of a string, every ringing harmonic, is employed only in service to his ethereal and evocative compositions. The result is a rich tapestry of sound that’s both soothing and thrilling, and an album that signals the arrival of a brilliant young Vermont talent.

Out of Nothing by Matteo Palmer is available at cdbaby.com. Palmer plays Radio Bean in Burlington on Friday, January 17.