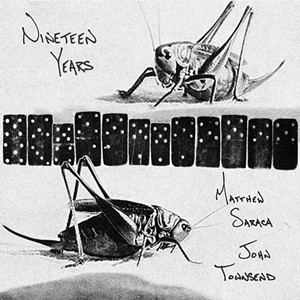 Burlington musicians Matt Saraca and John Townsend play in the ethereal Americana trio Silver Bridget, alongside musical-saw master Johnnie Day Durand. The world has yet to see an official release from the enthralling group, which is known for its spine-tingling interpretations of popular songs such as the Beatles' "She's Leaving Home" and Elvis Presley's "Love Me Tender." But a new project from Saraca and Townsend, Nineteen Years, is not just a worthy stopgap but a captivating work in its own right.

As the artists explain via email, they "met at [the University of Vermont] in the fall of 2000 and have been sharing, writing and performing songs together since then." Each songwriter contributes two songs to the four-track collection, singing lead and playing the lion's share of instruments on their own tunes. Rather than a disjointed split EP, the result is a seamlessly blended vision of light folk-rock. Cohesion of this caliber is earned when two people spend half their lives working together.

Much like their work in Silver Bridget, the musicians emphasize atmosphere. Airy beds of sustained sounds and whispers of intricate instrumentation abound. But unlike Silver Bridget's wordless renditions, the duo's work is lyrical.

The two play nearly all of the instruments — electric, acoustic and baritone guitars; keys; bass; and percussion — with only a few additions from collaborators Peter Dotson-Westphalen and Mary Patterson. Indie-pop auteur and Vermont expat Ryan Power — who once played alongside Saraca during a shared stint in formerly local psych-rock outfit the Cush — serves as producer. Adding Power to an album's roster of technicians essentially guarantees a stellar end product.

The quartet of songs flows like a lazy river, beginning with mid-tempo shuffle "Don't Listen to Your Heart." This Saraca-penned opener features lovely harmonies from Patterson. The lead artist has his hands full instrumentally, laying down every sound except drums, which Townsend provides.

The following two numbers, "Seven of Us" and "Had Enough?" are Townsend's. Following suit, the multi-instrumentalists switch up some of their duties and add in Dotson-Westphalen on bass. "Seven of Us" has a lingering sense of apprehension with tickled, high-pitched guitar juxtaposed with low, strummed chords. But all of the tension melts away with the James Taylor-esque "Had Enough?" Soft brushes on the two and four support a vaporous amalgam of piano, guitars and bass.

"At the End of the Day," Saraca's second contribution, ends the EP on a sparse note. The spacious track slowly unfurls over its brief two and a half minutes, revealing a friendly harmonica solo and sweetly cooed background harmonies.

Saraca and Townsend claim to have a vault of shared songs between them, making the brief Nineteen Years but a teaser. Hopefully we'll hear more in the near future.

Nineteen Years is available at mattsaracaandjohntownsend.bandcamp.com. Saraca and Townsend perform on Monday, August 26, at the Farmhouse Tap & Grill in Burlington.