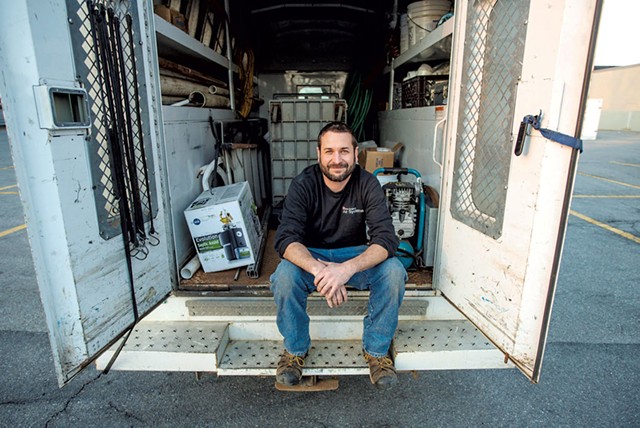 Chris Boudreau has been flush with work lately, and he doesn't see things letting up anytime soon. With the early arrival of freezing temperatures in Vermont, the 38-year-old master plumber has been dealing with a higher-than-normal volume of burst pipes and inoperable heating systems. And that's along with the usual customer calls about clogged drains, broken fixtures and leaky toilets.

A commercial plumber with New England Air Systems in Williston, Boudreau handles "pretty much anything that involves pipes and water," including fixtures that carry liquefied petroleum and natural gas. And as a "master," he is allowed to train apprentices, pull permits and run his own shop.

Though some might assume that a plumber's job is dull or undesirable, Boudreau said that, after 16 years in the trade, he's used to chilly basements and foul gas odors.

"There's never a mundane day in plumbing," he said. Case in point: When a water main burst and flooded the FlynnSpace — the basement black-box venue of Burlington's Flynn Center for the Performing Arts — in August 2018, Boudreau was called in to fix it. (Like doctors and lawyers, he declined to discuss his clients' specific plumbing woes.)

Boudreau, who lives in Winooski, now mostly works Monday-to-Friday hours in Chittenden County, though occasionally he travels to clients in Barre, Montpelier, Randolph and New Hampshire.

"Sometimes you just have to go where the work is," he said. "That's just part of the trades."

Boudreau recently spoke to Nest about the plumbing profession and the need for more young people to enter the career pipeline.

What are the most common plumbing mistakes you encounter?

I see a lot of pipe fittings being misused, especially in drainage. If you're not familiar with plumbing code, there are a lot of things that need to be done to make sure pipes drain properly. Obviously, I've seen a lot of funny things flushed down the toilet. I've found diapers — which are terrible to put in your pipes, because they expand in water — as well as cleaning wipes and feminine hygiene products. I wouldn't flush anything down the toilet that's not waste or paper.

The same with food waste. I once had a clogged-drain call at a house, and I had trouble figuring out what it was. There was a garbage disposal, and the owner had been putting eggshells into it. The crushed eggshells became like sand and completely clogged the pipes. The homeowner denied it, but his 5-year-old daughter gave him away.

When should people call a plumber rather than trying to fix a problem themselves?

When they realize that they don't understand what they're doing. [Plumbers] get a lot of calls from people who are halfway into a job and then realize they're in way over their head. If you're not comfortable with, or have knowledge of, what you're touching, it can be very dangerous, particularly when it comes to heating systems and water heaters.

I would never recommend anyone who's not trained to touch heat or hot-water venting systems. Carbon monoxide is one of our biggest concerns. Also, equipment like that has safety valves; sometimes people will see them dripping and think that they should plug it up. But by dripping, the valve is actually doing its job of letting off pressure. Plugging it can turn your water heater into a bomb.

What's the best part of your job?

It's really rewarding to fix a problem for a customer, whether it's residential or commercial. With commercial jobs, people can be really thankful that their production is up and running again. It costs businesses a lot of money when problems happen. Even for residential customers, when someone has frozen pipes or their heat is out, for me it's really gratifying to be able to troubleshoot and fix a problem.

Do you ever work in unusual places?

Oh, yeah. Everything from operating rooms to a morgue. One of the most interesting was working in a prison and having to have my tools inventoried every day, working in the same hallways as the inmates, finding all sorts of implements that were flushed down into the system. Being a commercial plumber, I have a lot of really interesting customers, so I get to see how the sausage is made behind the scenes.

Does the plumbing trade have a shortage of new workers?

Oh, yeah. It's a big issue, actually. To some extent, there's a stigma associated with the trades. It's a lot of hard work up front when you're an apprentice and you're working under somebody. You're doing a lot of the nasty grunt work. You're not necessarily being paid super well, and it doesn't always seem like there's a light at the end of the tunnel.

I was lucky. I remember voicing my frustrations as an apprentice, and there was an older guy who was near retirement age. He told me to stick with it because he saw the shortage coming and basically told me, "All in good time." And he was right. It's a great career. You just have to be willing to put the work in and get your hands dirty.