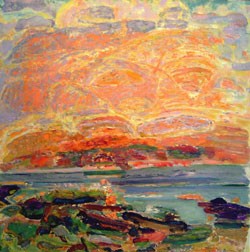 Shows by so-called “emerging” artists are often filled with undeveloped ideas and brash experiments. Such is not the case with “Masterworks,” currently on view at BigTown Gallery in Rochester, Vt. This is a dynamic exhibition showcasing six of New England’s most distinguished, mature artists — the youngest painter in the group was born in 1930. The works, however, are fairly recent; all but two pieces were created since 2000. The “masters” — Pat Adams, William Bailey, Bernard Chaet, Lois Dodd, Paul Resika and Steve Trefonides — have résumés laced with extensive honors and lifetimes of major exhibitions. A group exhibition by these accomplished artists in central Vermont is a major event.

Pat Adams’ work here is less concerned with vibrant hues than with texture; her fields of subdued color often include foreign objects. The 40-by-78-inch “Offering” is a blend of oil, grit, shell, enamel and something called isobutyl methacrylate on linen. Yet even with such a long materials list, the painting is monochromatic, and dramatic. The majestic beige piece is organized on a matrix of horizontal lines and two large, abstract circles. “Things” is a 2001 mixed-media work on paper with grit worked into a black circle at far left. Red-orange circles, and white lines that move like ionized particle trails through a cloud chamber, appear in a dark gray color field.

Like Matisse, Lois Dodd uses black to anchor her compositions. Her “River Bank, Vermont” is a winter landscape with a high, blank horizon, simplified in a Matissian manner. A gentle white slope unfolds beneath the black, and two sketchy but perfectly defined, denuded trees inhabit the space.

Bernard Chaet and Steve Trefonides are the explosive colorists of the show. The latter artist creates figurative fantasias of convivial groups dining and partying, defined with broken, gestural brushwork and rich layers of paint. Background and revelers seem to run together. But there’s an inner compositional logic to Trefonides’ paintings as well, and movement is paramount in his aesthetic.

The 40-by-35-inch “Shepherd Hotel” of 2005 is built around a purple/yellow harmony, with the darker hues placed more deeply into the picture plane and a sea of yellows where the figures play. But a broad lilac form in the foreground, at the bottom of a central vertical axis, might be a figure with his back to the viewer. Such an element flattens space ever so slightly. Trefonides’ 19-by-20-inch oil “Market Day” features loosely drawn figures in the foreground and washed greens and blues above a rambling horizon line, about halfway up the canvas.

Chaet creates layers with heavy scumbling. The 30-by-30-inch “June, Early” of 2004 is an abstract landscape with wonderfully layered hot orange and peach piled over their complementary hues. Textures are thick and exuberant. But as in Trefonides’ paintings, Chaet hangs colors from structural passages that are like compositional skeletons. “June, Early” has a sky of subtle elliptical clouds. The craggy foreground of Chaet’s horizontal “Dark Edge” is a series of mossy, overlapping triangles.

While youth has its advantages, the cachet wears thin in comparison to a long lifetime of creative excellence. In art making, at least, age is a good thing.