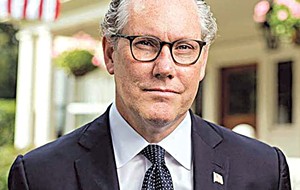 Before Massachusetts Republican John Kingston started spending his millions on a campaign to defeat Sen. Elizabeth Warren (D-Mass.) in this fall's midterm election, he established a "creative sanctuary" on a farm near Woodstock, Vt., and loaned it $4 million of his own money.

Kingston's focus, outside politics, is the multistate Sword & Spoon Group. That's the umbrella corporation for half a dozen organizations, four of which are nonprofits, founded by Kingston and his wife, Jean, to produce or sponsor religious media projects and artistic retreats.

The group's Vermont operation is called Sword & Spoon Workshop, a 501c3 founded in 2015 and incorporated in Woodstock. The retreat space operated by the nonprofit does business as OQ Farm and is located in nearby Bridgewater. The farm's website calls it a "creative sanctuary" that hosts artist residencies and faith-based gatherings. The Boston Herald described it as "a Christian retreat."

Burlington accountant Colleen Montgomery said a loan to a nonprofit from a founder or board member is perfectly legal if it's properly reported. She noted that the interest rate paid on the loan is important.

"There's no great leap of faith here to believe that [Kingston's] got some kind of control over the organization," she said, "and then you want to make sure that that control doesn't extend to ... him getting a sweet deal on this loan."

Sword & Spoon Workshop's Internal Revenue Service Form 990 says it paid $34,060 in interest during 2016 — less than 1 percent of the $4 million Kingston had loaned it. Montgomery said that doesn't seem like an excessive amount to pay in interest on such a large loan.

The workshop says its mission is "to sponsor a faith-informed retreat center and creative sanctuary for artists and to support the creation, production, and distribution of faith-informed narrative nonfiction film, television and other video content."

The Form 990 says the workshop, with an operating budget of $1.98 million, employed seven people and had 20 volunteers in 2016. Kingston made his multimillion-dollar loan that year, and the nonprofit repaid him more than $1.4 million, according to its 2016 Form 990.

Related Some Vermont Nonprofits Loan Money to Employees and Board Members

Some Vermont Nonprofits Loan Money to Employees and Board Members
10 nonprofits in Vermont in 2016 were owed a total of about $900,000 from individuals listed as “interested persons.”
By Sasha Goldstein
Economy

Bridgewater Town Treasurer Victoria Young said the farm was a religious retreat under its previous owner, who sold it to Kingston in 2011.

"They're sort of off on the end of the road, so we really don't see much of what they do," she said. "I know they do have a concert in the summertime."

Young said the Kingstons also own an adjacent property, but she wasn't sure how much time the family spends in Vermont.

Representatives for Sword & Spoon Group and Kingston's campaign did not respond to multiple interview requests from Seven Days.

Kingston, a lawyer and businessman, faces competition from two other Republicans in Massachusetts' September 4 Senate primary. He was a vocal critic of then-candidate Donald Trump in 2016 and helped fund an effort to get an independent conservative on the ballot to run against Trump. As a candidate for Senate, he has walked back his criticisms in a letter to state party officials, according to the Boston Globe. Kingston reportedly wrote that he supports the president and that he attended Trump's inauguration. The letter was sent as he appealed to the Massachusetts Republican Party for its endorsement.

Disclosure: Colleen Montgomery is an owner of the Burlington accounting firm Montgomery & Granai, which does tax preparation for Seven Days.