When Baldwin Creek cuts under Route 116 in Bristol, it flows by a 1797 farmhouse. Today it's the Inn at Baldwin Creek, but the property still retains an agricultural focus. In the front yard, which is akin to a small farm, an enormous garden has fueled the inn's kitchen for more than three decades.

Mary's Restaurant was farm-to-table long before that ethos had a name. Chef-owner Doug Mack opened it in 1983 with seasonal menus based on local ingredients. Fittingly, he later became a founding member and the first president of the Vermont Fresh Network, a coalition of chefs, farmers, artisans and consumers highlighting the use of local products.

"I'm sending you some extra broccoli fritters," Laura announced one night to a family celebrating a birthday. After straining a pale green cocktail into a coupe glass, she whipped into the kitchen and emerged with the promised plate. "I suggest smothering those with our chipotle aioli," she said, winking to the group. 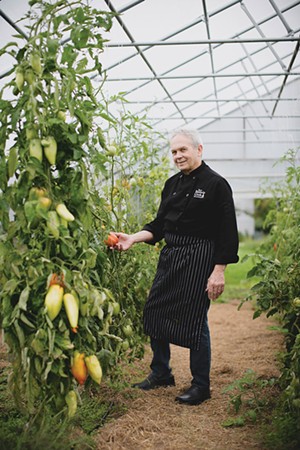 At the cozy wraparound bar, a couple played cards and dug into house-cut fries. Besides a diverse selection of wines, spirits and local brews, the bar has an ample stash of games, including Jenga and Bananagrams. The cocktail list, which had a superhero theme that night, reflects Mary's overall taste: playful yet refined.

There are just two menu staples: a local beef burger and a cream-of-garlic soup that's famous for good reason.