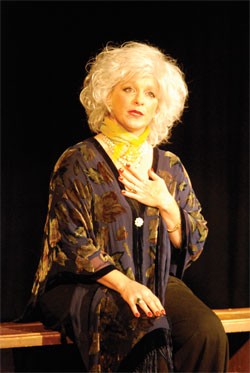 The challenge: Memorize 90 minutes of text in just two and half weeks, and then perform it solo for a live audience. It sounds utterly impossible, a nightmare to wake from in a cold sweat. Barre actress Mary Wheeler, however, embraced a last-minute opportunity to do Martin Sherman’s one-woman play Rose (1999) at Unadilla Theatre in East Calais last summer. This weekend, Lost Nation Theater presents a beefed-up production as part of its Winterfest. Montpelier’s Tara Lee Downs directs.

Rose is a sage, spirited grandma reflecting on her adventurous, sometimes harrowing journey from girlhood in a Ukrainian village to the good life on Miami Beach. Her path takes her to perilous places where Eastern European Jews found themselves during the 20th-century diaspora, such as the Warsaw Ghetto.

A staged reading of Rose was proposed as a late addition to Unadilla’s 2009 season, to pair with Caryl Churchill’s short Seven Jewish Children (2009). But as soon as Wheeler and director Bill Blachly read the script, they agreed, “We really should just do this,” she recalls.

Merely reading the role would have created “distance” between Rose and the audience, Wheeler believes. Rose opens the show with a blunt self-assessment: “I’m 80 years old. I find that unforgivable. Suddenly it’s a millennium and I stink of the past century, but what can I do? I’m inching towards dust, and sometimes I wish it would hurry.” Rose is a storyteller. She banters, jokes and sometimes kvetches.

So how did Wheeler tackle all those lines? Blachly and the actress actually trimmed Sherman’s script down to 90 minutes from its original two-hour running time. And then Wheeler retyped it all into her computer. “I’m very visual,” she explains. “So, seeing the words to me is everything. It’s much easier for me to learn by seeing it than to just hear it.”

On the page, Rose’s speeches “come in huge chunks ... mega-paragraphs,” describes Wheeler. “When I type it out, I break it into thoughts. So, one thought might be three sentences, and the next might be four or five sentences ... And after I’ve learned it that way, by thoughts, then I go back and start to turn it into paragraphs where it’s moving.”

At LNT, fleshing out the “bare-bones” Unadilla version of Rose means adding lighting, sound and Downs as director. Downs explains how the director has a unique role in helping to stage a one-person play. “The actor doesn’t have an ensemble or any other actors to play off of,” she notes. “So the director really is the eye. A one-person show ... seems like such a daunting project. The director is really there to keep pushing them and keep exploring.”