Mary Alice McKenzie Wants to Talk About Gangs. Is Burlington Ready to Listen? 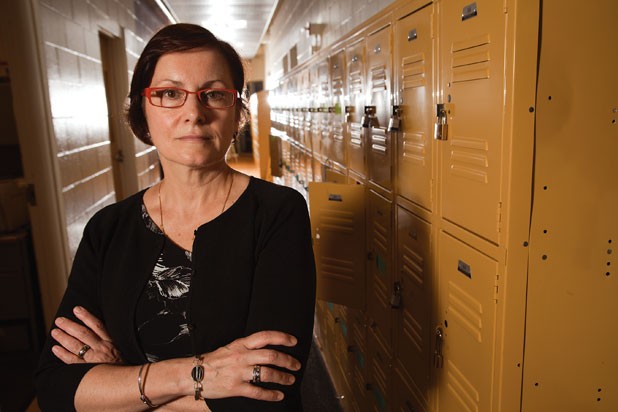 Does Burlington have a gang problem? Certainly nothing like the one turning Chicago’s neighborhoods into urban battlefields this summer.

But Mary Alice McKenzie, executive director of the Boys & Girls Club of Burlington, says she’s seen a rise in gang-like activity among some at-risk youth: prearranged fights at schools and in parks; and tales of middle schoolers earning $20 or getting new clothes to act as “runners” or “lookouts” in drug deals.

“A couple of boys said, ‘We’re members of the Bloods,’ or ‘My uncle is up from the city and he’s a Blood member and now I’m one, too,’” says McKenzie. “And they started wearing red.”

Late last year, McKenzie reached out to school officials, law enforcement and nonprofit leaders, some of whom reported similar concerns. In January, she convened an informal task force of law enforcement and child-welfare professionals with the goal of cutting off gang activity before it takes root. The group has since met once a month.

In April, McKenzie brought a national gang expert to Burlington for two days of meetings with police, prosecutors and school leaders. Prior to this visit, Joe Mollner, a retired Minnesota police official who now works for the Boys & Girls Club of America, helped her distribute a survey to the club’s young members to find out what they knew about gang and drug activity in their schools and neighborhoods.

Speaking about her efforts for the first time, McKenzie says many community leaders have welcomed the conversation she has started around gangs and drugs. But there are exceptions. Some people, she says, are in “flat-out denial” that Burlington has a gang problem. Others don’t want to talk about it for fear it will spark racial profiling.

Indeed, several officials interviewed for the story said privately that they were reluctant to discuss the subject of gangs for fear of fueling stereotypes about young black men in Vermont, an overwhelmingly white state with a prison population that looks more like the rest of the country. Especially when most of the people buying and selling drugs are probably white.

Among those voicing their concerns is Robert Appel, a longtime racial justice advocate and former director of the Vermont Human Rights Commission. In fact, Appel emailed his comments preemptively when he heard Seven Days was reporting this story.

“Without a sensitive approach to the subject of ‘gangs and drugs,’ we may be declaring open season on all young black men, irrespective of any factual basis,” warned Appel, who is white.

Kyle Dodson, director of Champlain College’s Center for Service & Civic Engagement and a member of McKenzie’s task force, agrees that talk about gangs could “demonize” young men of color. “But that’s a gamble, whereas the other side is a guarantee,” says Dodson, who is African American. “The guarantee, from my perspective, is that young men of color are going to be wrapped up in this stuff, and police and prosecutors are going to be spending time in those populations if we do nothing.”

As it is, a seemingly disproportionate number of the mug shots sent out in press releases from the Burlington Police Department are of black or brown faces. Police Chief Michael Schirling acknowledges that fact could inadvertently “paint Vermont’s community of color with a broad brush,” even though many of the arrested hail from out of state.

On the flip side, Schirling warns that racial sensitivity can also go too far.

“Drug dealing is a crime. Don’t let someone’s skin color keep you from calling because you’re afraid that you’ll be labeled as biased,” Schirling says. “It cuts both ways.”

Combating illegal drugs has become a top priority for Burlington police as unprecedented quantities of heroin have flooded into the state from Brooklyn, Albany, Holyoke and other cities. But do law enforcement officials believe organized gangs are behind it?

That said, Coffin says his office is prosecuting more gang members now than in the past — primarily Bloods and Latin Kings. The federal prosecutor has assigned Jim Leene, his law enforcement coordinator, to participate in McKenzie’s task force.

“There was a period of time when we had gang wannabe members, and it would be less common to have actual gang members coming to Vermont to sell,” Coffin says. “But we do have members of these gangs who are involved in selling drugs here.”

Coffin would not identify any specific cases involving gang members. However, one appears to be that of Frank Caraballo, an accused crack dealer charged with the murder of a woman in Dummerston in 2011. As reported by the Brattleboro Reformer, documents filed by prosecutors in the case indicate that Caraballo and his coconspirators may be affiliated with gangs in the area of Holyoke and Springfield, Mass.

Similarly, Schirling says Burlington police have arrested more gang members over the past 18 months — Bloods and Crips identified by tattoos, information on file with other police agencies, or their own confessions. But he would not identify them by name because that information has not been made public in court proceedings, he says.

Burlington doesn’t have a gang problem in the traditional sense; no one’s cornering blocks or battling for drug turf, the chief says. But he offers that police “have a belief that some of the increase in street-level robberies is at least peripherally related to people trying to prove their worth to a gang, or just a clique of people.” And as local kids are exposed to that behavior, the chief says, some are emulating it.

Cindy Maguire, head of the Vermont attorney general’s criminal division and a member of McKenzie’s task force, adds, “In terms of established Latin Kings or Bloods in large numbers, we’ve not been able to conclusively confirm that. But we sort of want to be ahead of that problem.”

Mollner says it doesn’t take large numbers of gang members to cause real problems. When he was a police commander in St. Paul, Minnesota, Mollner says the department identified 20 gang members collectively responsible for six homicides and hundreds of thousands of dollars in illegal drug sales.

During his Burlington visit, Mollner met with Schirling, Coffin and public school officials and led a training for some 50 people about ways of dealing with gangs. His takeaway?

“You definitely have an emerging gang problem there from what I saw and the people I talked to,” Mollner says.

In fact, Mollner thinks Burlington is the right place for a gang-prevention program administered through the Boys & Girls Club of America. If he approves the club’s application, it would receive $35,000 in U.S. Department of Justice funds — and possibly another $35,000 in year two — to run a program aimed at redirecting 50 youth at risk for gang involvement into “pro-social” activities. Only 14 cities across the country have similar programs.

The FBI says gangs are active in all 50 states, and it relies on those jurisdictions to voluntarily track and report gang activity. Vermont is the only state that didn’t submit information to the FBI’s latest annual report.

Just over the border in Québec, the Hells Angels Motorcycle Club does a booming business. The U.S. Department of Justice has identified the outlaw group as a source of marijuana being trafficked from Canada into Vermont. Lyndonville suffered a rash of knifepoint muggings in 2011 that police blamed on a small teenage gang called Deathrow 35.

Such accounts — and warnings from the corrections commissioner that gangs were expanding in Vermont prisons — motivated the legislature to convene the Vermont Gang Activity Task Force last year.

But its 18-page report only acknowledged a lack of study on the subject and rehashed three news stories as evidence of a rise in gang activity.

“Fact is, we do not know enough about gang activity in Vermont to move aggressively from research to comprehensive intervention,” the task-force report stated. “As a state, we simply need more facts.”

McKenzie hopes her ad hoc task force can supply those. Like Dodson, she agrees that the conversation must be handled sensitively to avoid stereotyping, but she insists it must be had.

“I don’t believe it’s right to be so afraid of the racial issue that we refuse to acknowledge there’s a problem with drugs in our community and that we’re afraid to talk about them,” McKenzie says. “Even if I get treated like a middle-aged reactionary, I’m just going to keep talking about what we are