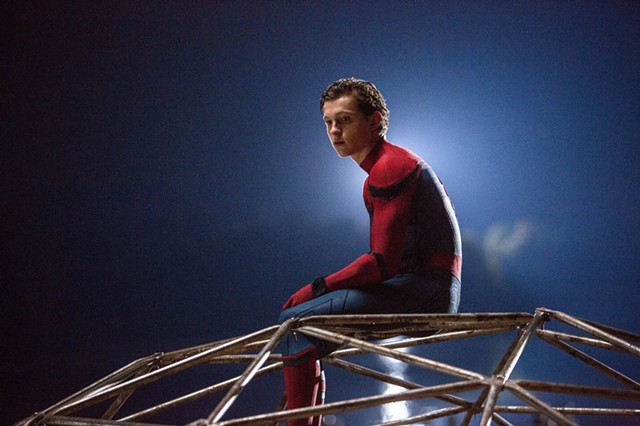 The world has seen six Spider-Man films starring three different actors in the past 15 years, including two versions of the web-slinger's origin story. If you're not a die-hard fan of Marvel Comics' gee-whiz teen superhero, it may seem like time to sweep this tangled web out of the rafters.

Not so fast! This year, thanks to a deal with Sony Pictures Entertainment (which produced the two previous Spider-Man series), Marvel Studios offers its own Spider-Man. And, while it may look like a superfluous cash-in, Homecoming is surprisingly fun.

The first point in its favor: Rather than a third rehash of Peter Parker's origin story, the film is a sequel to last year's Captain America: Civil War, in which the new Spider-Man (Tom Holland) briefly appeared. The second: Like many of the Marvel flicks, this one, directed by Onion News Network alum Jon Watts, leans toward comedy. The third: Where else can you see Michael Keaton playing a nefarious birdman — yup — who spews angry populist rhetoric?

What's great about Keaton's character, Adrian Toomes, is that he's not another madman menacing the world, just a blue-collar guy who hoped to make sweet cash by cleaning up after somebody else's apocalyptic battle. When the government throws his salvage company off the job, Toomes takes revenge by pinching alien tech that turns his crew into super-criminals. His evil deeds remain small-scale, and — in his view, anyway — the very embodiment of good old American entrepreneurialism.

Our villain's human-size ambitions make him a good match for Holland's Peter Parker, a more plausible teenager than any previous film iteration of the character. If Tobey Maguire brought the gee-whiz and Andrew Garfield brought the emo, Holland brings the fanboy. Easily flustered and high-voiced, like Michael Cera in his George-Michael years, this Peter is thrilled and freaked out by his own superpowers in equal measures.

The tone is set by a funny opening sequence: Peter's own shaky, breathlessly narrated video record of his stint with the Avengers in Civil War. In Homecoming, Tony Stark (Robert Downey Jr.) becomes Peter's irascible mentor for a superhero training-wheels period, which the kid explains to his Aunt May (Marisa Tomei) as an "internship." Eager to prove himself, Peter disobeys Stark's orders and goes rogue on Toomes, but even this not-very-super villain may be more than he can handle.

Over the years, superhero movies have gone heavily meta, placing muscle-bound heroes side by side with punier wannabes who represent their fans. Homecoming takes that to a new level by banishing the beefcake: If Peter is "adorkable," his friend and sidekick (Jacob Batalon) is somehow even geekier. Gone from the high school scenes are the standard jocks and mean girls; even Peter's crush (Laura Harrier) and his rival (Tony Revolori) are academic decathlon champs. When Captain America appears as the role model in an educational video series, he's a running joke.

Is Marvel pandering to nerd culture? Sure — and, considering the seemingly poor reputation of knowledge these days, I'm all for it. More importantly, Holland and the other young actors have a likable earnestness that pushes their heroics toward Spielberg territory.

Of course, Homecoming has the requisite CGI climactic battle, but its forays into overblown blockbuster theatrics are blissfully brief. The focus stays on the characters, and on the comical collisions between aspiration and reality to which both Peter and his antagonist are subject. While it won't convert any superhero haters, this version of the Spidey saga might just stick.

The original print version of this article was headlined "Spider-Man: Homecoming"