Would you let a stranger into your house if he offered to make you biscuits?

Martin Philip, baker and author of Breaking Bread: A Baker's Journey in 75 Recipes, is banking on people answering yes. Philip's newest project, which he alternately calls the Baker Maker Roadshow and Biscuits for Strangers, has him biking door-to-door with his banjo and a basket full of biscuit ingredients. His aim: to collect stories and connect with people who might not share his worldview.

Philip, 49, is the head baker at King Arthur Flour in Norwich and won the 2018 Vermont Book Award for Breaking Bread. He started his adventure in the fall of that year far from his home in the Upper Valley, biking along the Pig Trail Scenic Byway in Arkansas' Ozark Mountains. It was a return to his roots. While his Arkansas drawl might endear him to the locals, however, his self-described "blue state Bernie bubble" politics put him at odds with the people where he grew up.

Using baking as a conduit for conversation, Philip recorded the interactions from his trip to the Ozarks in essay form; excerpts are forthcoming in the Kenyon Review. "It has elements of baking, and certainly it's in the orbit of food, because food was the first community," he said of his project. "But this is a writing project more than anything."

Philip plans future stops in four communities along the Arkansas River: the headwaters in Leadville, Colo.; the seat of the Cherokee Nation in Tahlequah, Okla.; a Somali Muslim community in Garden City, Kan., that was the site of a thwarted bombing by white supremacists; and the confluence of the Arkansas and Mississippi rivers. "If I'm going to sell [this project] as a book, it's got to be more than just postcards from the Ozarks," Philip said.

No matter where he is, the premise is simple. "I knock on the door and say, 'My name's Martin Philip, and I'm riding around on my bike talking to people about food and making biscuits. Can I make you some biscuits?'" Philip explained.

Seven Days chatted with Philip over the phone about the random door knock, how to carry a banjo and a basket of biscuit ingredients on a bicycle, and why biscuits are the perfect thing to bake for strangers.

SEVEN DAYS: We're conditioned not to talk to strangers from the time we're little. What made you decide not only to talk to them but to go into their homes and bake for them?

MARTIN PHILIP: This project is all about context for me. Everything tastes better with context, right? When I started thinking about it, it was 2016. It was still in the lead-up to the election — it wasn't even November. 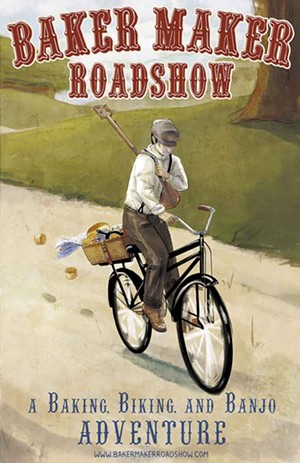 What sparked it was the divide between so many groups in society. When you turn on the news, or however you take your daily dose, you see that there are a lot of disconnects. Maybe some of that is played up because it gathers eyeballs, but I felt it between myself and the people where I grew up. We are a divided nation in many ways, and I wanted to go see if it was true or not.

So I started thinking, How do I do that? How do I get to a place where the tools I have — blunt or sharp — could be used to foster conversations and maybe even get me into people's homes? I knew I wanted to be out in the environment. I didn't want to walk, because walking felt like an imposition. If you walk up to someone's house in the country, they might think they have to give you a ride. [Laughs] If you pull up in a car, that's not good because it's aggressive.

But I thought, Maybe a bicycle. It couldn't be a fancy bike, because I didn't want people to peg me, like, "Oh, look at the boy on the fancy bike." So I got this 1930-something Elgin cruiser. It's cosmetically rough, but it rides OK.

Then I started putting together this look, for lack of a better word. I didn't want to self-identify. I didn't want to wear an Act Up T-shirt or a Bocephus [Hank Williams Jr.] T-shirt. I tried to be of another era, and I think that worked.

Then, of course, there had to be some baking component. It's a good activity, because if you're baking with someone, you're standing side by side. It deflects in a way, but at the same time it fosters conversations because food is so key to experience.

SD: Were people willing to let you in?

MP: It was very hard to get into houses. It sounded like a pretty good idea when I was up here in Vermont [laughs], but I spent two days trying to get in. I'd knock on the door, and dogs would go apeshit. I'd see a curtain flick, or I'd see a shadow move behind the house — and nothing. I was so frustrated that I actually forgot I had a plan B.

I went to this place called Turner Bend, which is a big outfitter along the river where everybody cruises through. I went down there and started playing the banjo, and all this crazy stuff started happening. Within two hours, I was booked for the rest of the week. After that, I didn't really care about the random door knock. The point wasn't the gesture, the point was the conversation.

SD: Did you do any trial runs in Vermont to see if you'd get the same results?

MP: I thought about it. I even had people say, "Oh, you've gotta go test it." And I could never bring myself to do it. I felt some need to just let it unfold and let it be hard. If you go in there and everybody's holding your hand, or you're too familiar, the story's different than if you get thrown out on your butt.

SD: What were the interactions like, once you got in the door? Were they hard?

MP: They were powerful, and I heard stories that not in a thousand years could I have made up. I think I expected that. I expected that everybody I might talk to would have some story, or there would be something that, as a writer, I could chew on. Some visits definitely didn't work as well as others, but by and large, I could have written about each one.

SD: How do you carry all that stuff on a bicycle?

MP: There's a rack on the back of the bike, and a wicker basket. When I initially told my mother I'd need a basket, she said, "I've got just the basket. You rode in it when we moved from Kentucky to Arkansas." I thought that was too sentimental, so she gave me another old one from my grandmother. I put just enough flour and butter in the basket for a single visit, maybe two.

And then my mother made this repurposed gun sack that I could fit my banjo in. She was funny. She said, "I put a pocket on the outside for your gun." [Laughs] She's a social worker and spends a lot of time out in these rural communities, and she was like, "You're gonna wanna have a gun." I think I said, "My banjo is my gun."

SD: Your banjo and your biscuits. What about the biscuit makes it right for an adventure like this?

MP: For me, it's the thing I resonate with. Everybody has those foods that take them to a different place, or even a time. But also, biscuits have universal appeal, and they can be eaten warm. If I were at a visit, and it was like, Uh, I need to get out of here, biscuits are out of the oven in 20 minutes. If we were making bread, it needs two hours of bulk fermentation and an hour rise, and it's like, Oh, shit, we're here all day.

MP: The biscuit I like is the classic Appalachian type. I like a biscuit that's buttery, flaky, not too tender and not too sweet. Cut with a two-inch cutter, brown on the edges, maybe some layers when you break it apart if the butter goes in well.

In terms of making a good biscuit, what's important — especially if you don't have a lot of experience with it — is to maintain ratios well. And I hate to say it, but the best way to maintain ratios in a baking environment is by measuring ingredients with a scale. Because one person packs their cup of flour, one person sprinkles and scoops. There are a lot of ways to get flour into a cup measure, few of which are accurate. That being said, I sure as hell wasn't out there on the Pig Trail with a digital scale. [Laughs] That really would have blown my cover.

The original print version of this article was headlined "Biscuits for Strangers | Martin Philip talks about his experiment in baking, conversation and humanity"