Marlboro College Students Get on the Bus for Expedition Ed 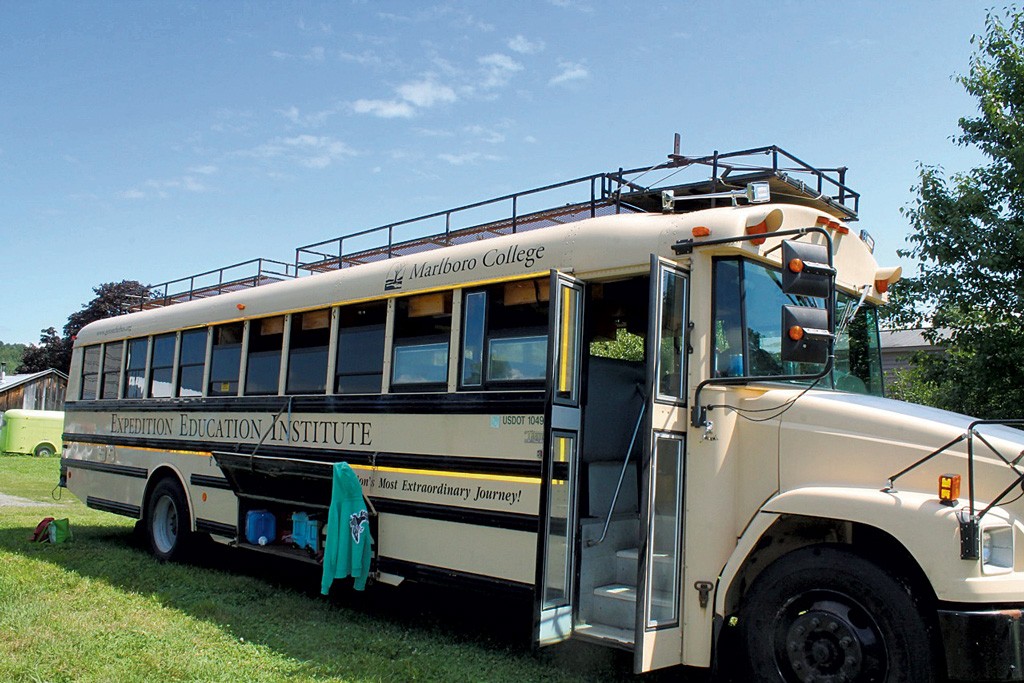 Like many bus drivers prepping for the first day of school, 57-year-old Neal Taylor was getting his vehicle in order on an August afternoon. First he repaired one of the bench seats inside the 40-foot bus. Next, he inventoried the medical kits and tested the vehicle's backcountry stoves. He pulled out three guitars to ascertain if they needed new strings. Finally, he updated the library with titles including Active Nonviolence: A Way of Personal Peace, Democracy in Small Groups and Pedagogy of the Oppressed.

Clearly this was no ordinary bus — or school. Taylor is a member of the faculty of Expedition Education Institute at Marlboro College. By September, Taylor and his colleague, Bruce Lindwall, had enacted the first ritual of the academic year: pulling open the bus' passenger-side door to pick up students. However, instead of dropping their charges off at scholastic institutions for the day, these drivers would spend nearly every waking hour with them for the next four months.

Taylor and Lindwall are both equipped with CDL Class B licenses — to operate the bus — and PhDs (evolutionary biology and ecology, and plant biology, respectively). On September 1, they embarked on a 2,000-mile field trip with their students that began in Vermont and will conclude in Texas. The six Marlboro College undergrads will explore issues of energy and climate justice while living and learning out of the retrofitted school bus.

For the rest of the semester, those students, their two faculty guides and one faculty intern will prepare their meals, meet, study and sleep outdoors. They'll visit a wind farm in Massachusetts and communities with coal-fired power plants in West Virginia, learn about natural gas fracking in Pennsylvania, and explore issues related to petroleum drilling and refining along the Gulf Coast. Instead of relying on a single instructor or text, they'll consort with what EEI's executive director, Larkspur Morton, calls "resource people" — regionally based writers, scientists, activists, educators and community leaders. 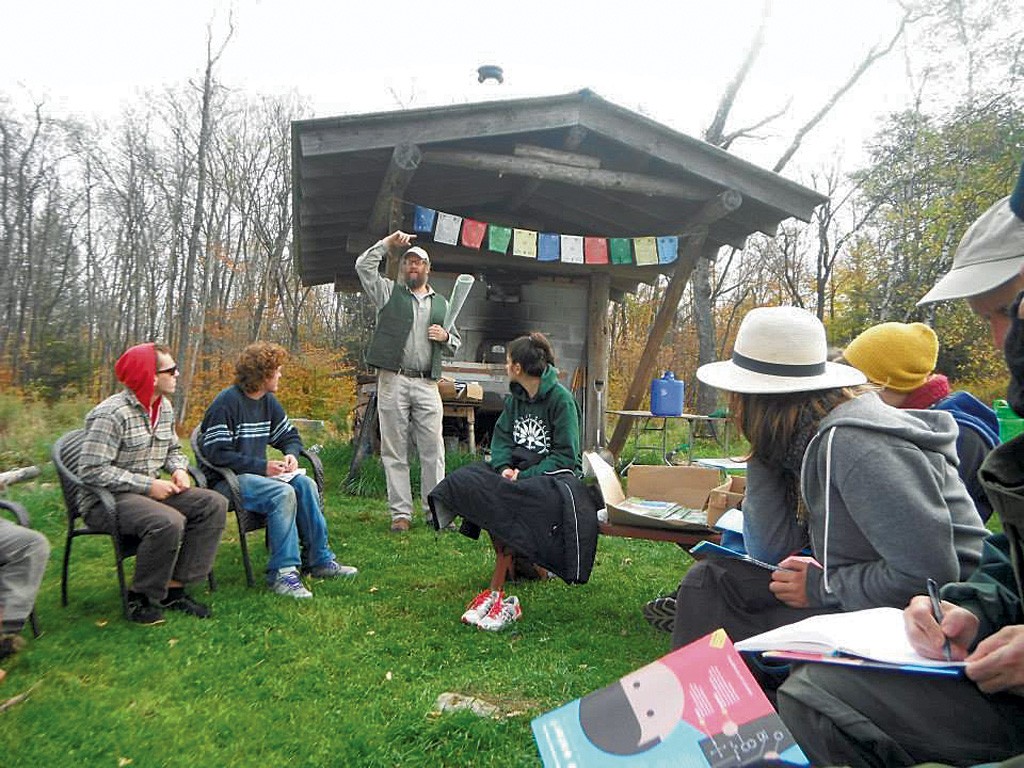 Marlboro's newest program may appear to be in the startup phase as it rambles out of the Marlboro parking lot on its first full-semester voyage. But EEI is actually the revival of a 40-year-old educational model. When I was a student participating in an earlier incarnation of the program, for four semesters in 1992 and 1993, it was known as the Audubon Expedition Institute. Today, its 3,000-plus alumni call it simply "the Bus."

Now the Bus has made a round trip, re-launching with accreditation from Marlboro College — 80 miles from Killington, where it all started in the late 1960s.

Using a school bus as the vehicle not just to education but of education was the brainchild of Michael Cohen, an educator and "eco-psychologist" who founded the Trailside Country School as a secondary institution. He and his then-wife, Diana Becker, took students on the road, conducting bus-based expeditions to the nation's West and Southwest.

Cohen chronicled his unique educational model in his 1974 book Our Classroom Is Wild America: Trailside Education in Action — Encounters with Self, Society and Nature in America's First Ecology Expedition School. "The human race has lost its way," he wrote. "The road upward from the savage does not necessarily lead to the cluttered, materialistic and, at times, desperate life that we presently live."

By the time Cohen resigned in 1985, the Trailside School had transitioned into an accredited undergraduate program, and it continued as AEI under Becker's leadership. While AEI operated under the aegis of Lesley University in Cambridge, Mass., in the following decades, the founding characteristics of Cohen's experiential learning community persisted.

Former AEI faculty member Ben Williams wrote his doctoral thesis about that community, describing its premise as "simplifying life in order to understand the sources of our environmental dilemmas." Instead of studying on campuses equipped with dorms, cafeterias, student centers and laboratories, Williams observes, students on a typical Bus expedition shared responsibility for "preparing food and shopping for a group ... finding campgrounds, mapping routes, maintaining the bus, studying, finding libraries, planning curriculum and schedule." The program also moved away from conventional academic hierarchies, he writes; while teachers on the Bus "maintained authority," they tended "toward a less structured position of guide."

For 25 more years, the Bus rolled along, expanding to incorporate a graduate program and simultaneous expeditions on multiple buses. Students explored landscapes affected by complex issues such as water use in the West, mining and Native American rights in the Southwest and clear-cut logging in the Pacific Northwest.

In 2010, Lesley University, which then had full administrative management of AEI, hit the brakes. The school cited funding issues, and the program came to a halt.

But alumni wouldn't let the Bus run out of gas. They raised $20,000 in support of the program's revival, and former Bus faculty forged a new partnership with Marlboro College. The new organization, EEI, purchased one of Lesley's remaining Thomas Built diesel school buses, which was already retrofitted with LED lights, cubbies, Igloo coolers, a library and a few guitars.

The six students enrolled this year won't make the program solvent; to hit that goal, says Morton, EEI will need a minimum of 16 students. Nonetheless, the new-old program has gained enough momentum to start rolling again.

For students like Marlboro senior Ian Hitchcock of Wyoming, the Bus is a way to infuse theoretical arguments and book-based research with rubber-meets-the-road experience. Hitchcock's plan of concentration (Marlboro's equivalent of a major) involves "examining social responses to climate change," he said. He has pursued that study through one-on-one tutorials with faculty exploring the psychology, history, sociology and literature of "the bystander effect." Now he's ready to get some hands-on knowledge.

Hitchcock admitted that he's not sure how he'll be able to combine life on the Bus with writing the paper he needs to submit to his campus adviser, John Sheehy. The vehicle has few electrical outlets, no phone-charging portals and no internet. But, Hitchcock said, he has assured the prof that he'll complete his work.

Another EEI participant, Helen Walz, is a gap-year student from Minneapolis who confesses that she's still "figuring it all out." She's passionate about the sciences, she said, and may pursue an engineering degree, but for now she wants to learn more about the intersection of environmental issues and her chosen disciplines.

Two days before EEI's Bus was scheduled to depart from the Marlboro campus, students and faculty convened in a circle in the shade of a hemlock grove near the college's solar greenhouse. Taylor balanced a whiteboard on his lap and used a marker to scribble down terminology and statistics. "Does anyone know the average caloric intake needed per day?" he asked.

The group had been discussing food likes and dislikes in anticipation of grocery shopping for an upcoming backpacking trip in the Adirondacks and preparing their meals on the Bus. Aptly, Taylor reframed the discussion around the theme of energy. He held up the whiteboard to display the term "EROI" — energy return on investment. Next, he asked student to consider the weight and nutrition value of a cabbage compared with that of a block of cheese.

For the next 15 minutes, the conversation ranged widely, touching on the best foods to carry into the backcountry, industrial strategies for extracting fossil fuels, and the socioeconomic ramifications of finding and purchasing organic foods while traveling through the rural Southeast.

Yet the students managed to find the connections between those seemingly disparate topics — a pattern I remember well from my own time on the Bus. Between rolling up my sleeping bag, boiling water to wash pots and singing folk songs as the bus barreled toward another rendezvous with a resource person, I got an education that strayed well beyond the boundaries of course descriptions, showing me how different disciplines could inform one another.

Officially, these new EEI students will earn 15 credits this semester, completing requirements for five different courses with names such as Leading and Learning for Transformation and Resilience, and Energy Issues and Sustainable Solutions. For gap-year, transfer and regularly matriculated students, the cost of the program can be covered in multiple ways, including Marlboro tuition, through which students are eligible for financial aid.

For the faculty, this relaunch of the Bus is the culmination of years of dogged efforts. A veteran instructor for the Bus program, 61-year-old Lindwall said he feels giddy excitement about returning: "Do I really get to do this again?" He admitted that he also wonders if he has the stamina for a 24-7 work commitment: "Can I really run that hard for that long?" he asked rhetorically.

Both Lindwall and Taylor will be back for EEI's spring semester, a trip focused on sustainable food and farming in California.

Taylor's emotions ran high as he recalled getting behind the Bus' wheel and starting its engine for the first time since 2010. That happened in 2013, when EEI offered students a 10-day immersion course in extreme energy during their fall break.

Embarking on that trip, Taylor scanned the wide mirror above his dashboard, surveying the Bus' contents: kitchen implements bungeed securely in the back, books tucked away on the shelves, tents and sleeping bags piled high in the tent bin, and students talking excitedly on the bench seats behind him. To his surprise, Taylor said, he felt a small knot of emotion in his throat. Then he fixed his eyes on the road ahead and drove.

Find out more about the Expedition Education Institute at marlboro.edu

The original print version of this article was headlined "Road Scholars"