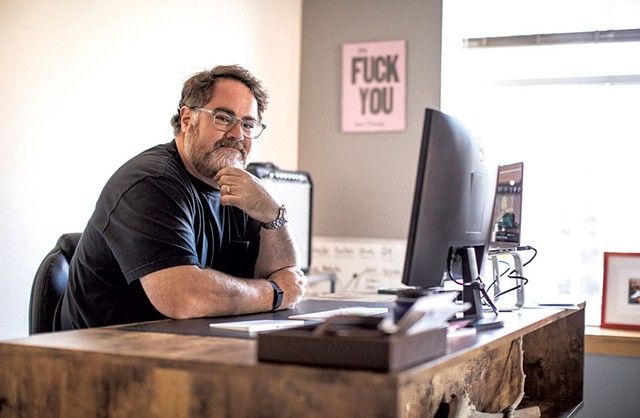 In 2017, Scott Sparks needed help developing the brand identity of his Brattleboro-based CBD store, Vermont Hempicurean. Though his hemp-derived products were legal to sell in Vermont, they weren't legal at the federal level.

"In those days, it was ... a felony every time I sold CBD," Sparks explained. "When I opened, I didn't know if I'd have SWAT teams [showing up] or mothers marching outside with pickets."

Today, Sparks operates four cannabis businesses, each with a unique identity and clientele. Vermont Hempicurean, now in West Brattleboro, serves health-conscious consumers, including those he calls "the little old ladies ... who want nothing [else] to do with cannabis."

On the other end of the spectrum is Vermont Grow Barn, Sparks' gardening supply store, which caters to cannabis cultivators. Its customers are largely male and "legacy growers," he said, referring to those who grew weed illegally for years, often for the black market.

When Sparks needed logos, websites and package designs for his businesses, he contacted Will Read, founder and owner of CannaPlanners. Read launched the Burlington-based digital marketing firm in 2017 aiming to become what he called "the Dealer.com of the cannabis industry," referring to the Burlington-based tech company that builds websites for auto dealerships.

Read, a 41-year-old Rhode Island native who's lived in Vermont off and on since 2004, seems to be on his way to that goal. CannaPlanners, which has just 12 employees, has clients in all 19 states where adult-use cannabis is legal, including 80 businesses in Vermont alone.

CannaPlanners specializes in helping cannabusinesses shape their identity: Who are they? What sets them apart from their competitors? Who are their customers, and what will keep them coming back?

Such seemingly basic market insights can be difficult to determine in a retail industry that hasn't been legal in Vermont until now. And because marijuana is still listed as a Schedule I drug, meaning that the federal government doesn't recognize any medical uses, cannabis businesses are largely precluded from advertising on radio, television, search engines and social media sites.

CannaPlanners' expertise, Read explained, is in helping businesses define themselves and avoid the cannabis clichés that can make it hard for consumers to distinguish one brand from another.

"They may put out a great product, but if there's no messaging behind it, there's nothing compelling to come back to." Will Read tweet this

Even the most fundamental question, "Who is your target demographic?" confounds many of Read's clients who had never previously given the matter serious thought. Answering "Anyone who smokes weed," he said, is like marketing a high-performance sports car to everyone who drives.

"They may put out a great product," Read added, "but if there's no messaging behind it, there's nothing compelling to come back to."

CannaPlanners' downtown Burlington office looks like what you might expect from a young and hip design firm that caters to weed professionals. Beside Read's desk sits an electric guitar from his touring days with the band the Casual Fiasco. There's a Nerf basketball hoop over one door and a framed Phish poster from a 2012 show hanging above a bookshelf that's lined with comic book anthologies.

Notwithstanding the playful décor and pungent trace of fresh herb in the air, Read doesn't lean into an overtly stoner aesthetic, personally or professionally. The potential customer base for cannabis businesses is huge, he noted, but many consumers will need to be eased into Vermont's legal market.

"Lest we forget the psychological effect the war on drugs had on us," Read said, "there's Gen X and the millennials, who grew up on the DARE program, and Nancy Reagan's 'Just Say No.' And the boomers had [Richard] Nixon's war on drugs."

Read doesn't have a business degree or Silicon Valley experience, but he knows something about creating a consumer-friendly buying experience. For six years, he worked as a business manager at Apple, opening its retail stores in Boston and New York City.

Then, in 2014, while trying to figure out his next career move, Read traveled to Colorado and visited dispensaries in Denver and Boulder. Having previously worked for a Vermont marketing agency, he was surprised to discover that the aesthetics of Colorado's dispensaries were bland, homogenous and uninspired. Every product package had a kelly green pot leaf on it, and every dispensary a green medical cross in the window.

"Today, everything looks like an Apple Store, but back then, it was weird and gross and not the best experience," he said. "No one had any soul."

Upon his return to Vermont, Read dipped his toe into the cannabis industry as a digital marketer. Though recreational weed was still illegal in the Green Mountain State, legalization bills were already under discussion in the legislature.

Meanwhile, Vermont's hemp industry was taking off. In 2013, there were just 175 acres of farmland registered for hemp cultivation, according to the Vermont Agency of Agriculture, Food and Markets. By 2019, that number had climbed to 9,000 acres, with hemp farms in every county in the state.

Then Read hired Josh Cleaver, a fellow musician with whom Read had toured with the Casual Fiasco. Cleaver, who'd designed the band's album covers and T-shirts, joined CannaPlanners to design business logos.

Soon, CannaPlanners expanded its offerings to other services, including package and industrial design, email marketing, and search engine optimization. For Read, who calls himself a "late-bloomer entrepreneur," his future in the cannabis environment looked as though it were ready to flower.

But by 2019, Vermont's hemp bubble had burst. In 2020, the pandemic shuttered businesses nationwide.

"When COVID hit, I said to myself, Self? You're fucked. This was fun and cool for the last three years, but that's it, kid," Read recalled.

But like many businesses, CannaPlanners pivoted. Rather than custom-build websites, it produced a turnkey version for businesses to build their own websites; in 2020 alone, the company sold 50 of them. Budding entrepreneurs were still starting CBD companies, Read noted, and they all needed ways to promote and sell their wares.

In August 2020, Read hired his first salesperson, based in Boston, who started selling CannaPlanners' services in Massachusetts and other states with regulated THC markets. The company shifted its profile from small CBD operations to adult-use dispensaries, cannabis producers and manufacturers.

Magic Mann CEO and cofounder Meredith Mann said she began working with Read and his team about three years ago when she wanted to rebrand her Essex bakery, café and CBD retail store. Her company's previous name, BTV Local 420, was too ambiguous and confusing to some people, she explained.

"We wanted to grow up our brand and have it say more than it was saying about us," Mann said. She needed a new name, packaging and website that was "multigenerational" and that "people could trust," especially as the business transitions to selling weed and THC-infused products.

"Will was the guy," Mann said. "He and his team have been absolutely key in developing our brand and making sure that it's stayed strong."

Read wants to build that strength not just for his own clients but Vermont's entire cannabis industry.

"Now that this is all happening," he said, referring to Vermont's retail market, "we're focused on helping our neighbors. We want to make sure the cannabis scene here is ... rad and looks good."