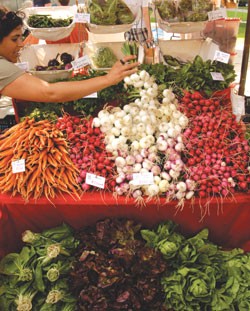 Chris Wagner knew a rental increase was inevitable when he went to meet with Burlington Parks & Recreation to discuss a new three-year contract for the Burlington Farmers’ Market at City Hall Park.

“At the end of our contract we always sit down and discuss the rent,” says Wagner, the market’s manager. Given that the market has grown significantly over the past few years, and has been paying just $3600 to use the park for its entire season, he expected the annual rent would increase to as much as $5500.

So it was a shock when P&R Director Wayne Gross proposed a 450 percent increase, to $16,640. “We feel kind of blindsided,” says Wagner, noting that in Montpelier, as well as a handful of other Vermont cities, farmers’ markets operate rent free. “The market is a nonprofit organization,” he points out. “It didn’t make any money last year.”

Its vendors did. In total, the 58 sellers brought in over a million dollars, which averages out to more than $17,241 each. But, Wagner warns, “Those are gross figures. That’s not what the farmers take home.” In addition to fuel, labor costs, marketing materials and market membership fees, vendors have to shell out for insurance and are greatly affected by bad weather.

Wagner predicts that such a dramatic price increase will ultimately be passed on to the consumer. “We know that it’s expensive to buy local; it’s going to put more of a strain on,” he guesses. He also believes that the BFM’s role as an incubator for small businesses will be compromised, saying, “I can think of four new vendors who might not continue.”

For his part, Gross believes that the proposed increase is appropriate given the market’s growth. “In the last three years, the amount of business they’ve done has grown significantly,” he says. Gross also points out that other vendors who sell their wares in City Hall Park — during concerts, for example — shell out $30 for a day pass. BFM farmers currently pay a seasonal rate of $200 for a 5-foot block, which works out to $8 a day. According to Gross, $2.39 per day of that fee goes to rent. “We’re trying to come to a level that makes sense for everyone,” Gross says. “We’re in the middle of negotiations.”

Should the farmers’ market get special treatment? Gross isn’t sure. “Volume has increased dramatically, which causes more wear and tear on the park,” he says. And, with the economy in a slump, “The city is more conscious about trying to create revenue where it can.” His overall assessment: “The market has gotten a really, really good deal from the city for a long time. It’s gotten so big — should the city be benefiting some more from that success?”

Although Gross and BFM president Hank Bissell have discussed phasing in the increase over three years, members of the market are still incensed at the idea of paying so much more, particularly because they bring so many consumers to downtown Burlington.

After appealing to Mayor Bob Kiss, which has not yet yielded the desired results, the market’s steering committee began exploring other potential locations, including some outside the Queen City. Still, “It’s pretty obvious that we’d like to continue downtown,” says Wagner. “Nobody wants to leave.”

Speaking of markets: Next fall, Shelburne will join the growing list of towns with a late-season farmers’ market. The monthly gathering will take place at the Shelburne Town Center Gymnasium. Dates and vendors have yet to be announced.