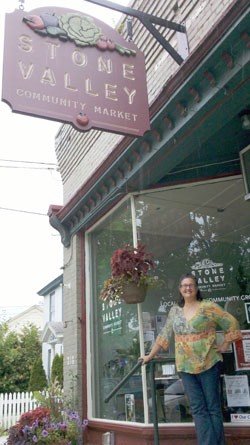 College students can be pretty pie-in-the-sky about making the world a better place. While their ideas are sometimes unrealistic, the well-intentioned students are nothing if not creative. And that’s why, every so often, one of those wild ideas comes to fruition. That’s how Poultney came to have a food co-op.

In 2005, a class at the 820-student Green Mountain College created a business plan for a hypothetical cooperative market in the center of its small town. The students reasoned that, since their institution was committed to sustainability, environmentalism and the local food movement (the Sierra Club recently voted GMC the second-greenest college in the country), it made sense for a business in town to embody those ideals.

While their class project was never meant to be anything more than that, it planted a seed in the community. This summer, six years after the students’ initial plan, the Stone Valley Community Market on Poultney’s main drag opened for business under the direction of like-minded community members. So far, the market is proof of what can happen when a college collaborates with its broader populace to achieve a mutually beneficial goal.

The residents of Poultney, a town of 3600 in the middle of the state’s slate-producing region, had been clamoring for a co-op for years. In fact, a 2002 study published by the Vermont Council on Rural Development suggested that the town needed one. Poultney had a respectable grocery store, but no place to buy specialty items such as nutritional supplements and local meats.

By the time the GMC students drafted their business plan, a few years later, local interest in a co-op had soared. Though they didn’t fully understand buying and distribution, the students became dedicated to fulfilling the community’s wish. So they enlisted the help of Julia Riell, a former accountant in the IT world, who had experience with community buying clubs and knew her way around a spreadsheet and a calculator.

Along with other community members — including Eleanor Tison, a professor at GMC, and Kris Jacoby-Stevenson, an alumna of the college — Riell began to shape what a co-op in town might look like. Then life got in the way. The idea was shelved until 2009, when downtown-revitalization talks renewed discussions about a co-op. Everyone in Poultney seemed to be on board; residents just needed someone to spearhead the project and bring together the various stakeholders, including the college.

Riell stepped up as chair of the steering committee, which soon had a new business plan in place. While there was no shortage of enthusiasm in both the community and the college, matters of funding and location still had to be worked out. Again, GMC students proved helpful.

Riell challenged the students in one of professor Lucas Brown’s environmental studies classes to find a downtown location for a co-op, then design one appropriate to the space they found. Riell gave them free rein: “There were no parameters on ideas,” she says.

From the assignment came inspiring concepts — green awnings, living roofs, an elaborate composting system. Granted, they were expensive plans, and at the time the nascent co-op committee had only $20,000 to spend outfitting the business. Still, the process helped winnow the potential locations to two.

Ultimately, the steering committee settled on a former sandwich shop that the town had acquired in a tax sale. Because of six-figure tax liens, the building was nearly impossible to sell, explains town manager Jonas Rosenthal. “It was unlikely it would ever be used,” he says.

Riell and her fellow committee-turned-board members began working on financing structures that would enable them to purchase the building. That’s when GMC president Paul Fonteyn and his wife, Marsha, suddenly announced their offer. They bought the building as private citizens rather than as agents of the college — Fonteyn didn’t want a potential business taken off the town tax rolls.

It was a risk for the co-op stakeholders to house the market in a building they didn’t own. But, considering the prohibitive tax liens, the committee accepted the Fonteyns’ offer. After the six months it took to clear the liens with the IRS, the couple took possession of the one-story structure, which sold for $50,000. Under Stone Valley’s contract with the Fonteyns, the co-op will pay below-market rent and retain the right to buy the building for 10 years.

Paul Fonteyn never thought he’d become a landlord. But he figured a co-op dovetailed perfectly with the college’s mission, and might even be a boon to student recruitment and retention. Plus, it would serve as a symbol of community.

“When you go to a co-op, it’s not just to buy your food,” Fonteyn says. “It’s a community event. It brings people together.”

With a $31,000 technical-assistance grant from the USDA, the co-op was able to hire Lucas Brown, an architect by training, to design the space. The 250-member market hosted a series of work parties throughout the past year, gathering people to paint, sheetrock and do whatever else needed to be done. Many GMC students pitched in, including the entire women’s softball team.

GMC students also donated money. In March, the college’s Student Senate gave the co-op a gift of $4500. Later that month, it offered $10,000 to serve as collateral for a larger business loan.

“We wanted to show Poultney that students are as involved in the local economy as longer-time residents and businesspeople,” says Rob Lees, treasurer of the Student Senate. “The Student Senate’s gift to the market is our way of literally putting our money where our mouths are.”

The Poultney community lent a hand, too. Bob Williams, owner of Williams True Value Hardware store downtown, donated shelving to the new market. He sees the co-op as a good thing for all the merchants in the business district.

“We hope it’s going to add a lot,” Williams says. “They filled an empty building, so that’s wonderful.”

Not only is the co-op breathing life into the town center, but it’s also providing the college with a practical application of the principles of sustainability. At the co-op, students can see their ethics at play in the real world, especially the notion of food sovereignty. The market sells food from local producers such as Purple Burdock Farm in West Haven, Southwind Farmstead in Rupert and Old Gates Farm in Castleton, which is run by co-op board member and GMC alumna Jacoby-Stevenson. The store also offers produce from GMC’s student-run Cerridwen Farm.

“For the students, they go to this sustainable college, but there’s an immense disconnect for them to walk off campus and have no way to make that work,” Riell says. “I’d like to think that there would be some benefit to the college.”

That benefit remains to be seen, since the co-op has only been open a few months. But Riell and others hope students will stick around after they graduate and start businesses of their own in the area, or work at existing operations. Another advantage could come in the form of future collaboration between the college and Stone Valley, in which the market could serve as a kind of lab for a variety of courses. Finally, the co-op’s presence might even help attract students to Green Mountain College.

“I think the co-op is vital for student retention, involvement off campus and interaction with the community,” Fonteyn says. “I think it’s been a really good success.”