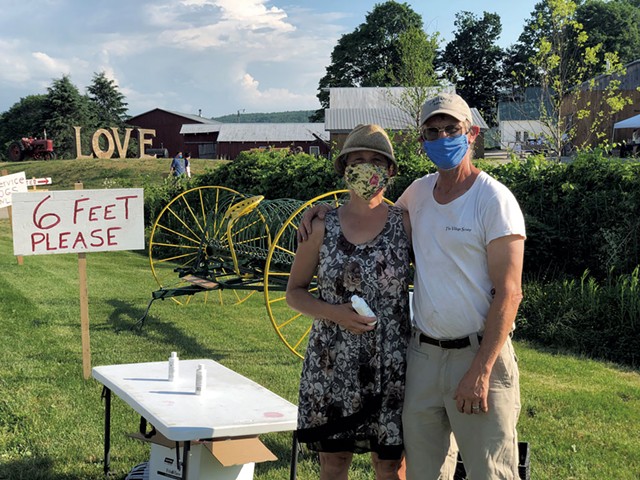 Mike Isham did not intend to start a new farmers market during the most challenging year for markets in recent memory. When he put out a call for vendors in January, we were only wearing face masks to keep warm, and "social distancing" hadn't yet entered our collective vocabulary. But despite the global pandemic, the weekly farmers market at Isham Family Farm in Williston is up and running — and it almost feels normal.

The Tuesday evening market kicked off on June 16 and will run through August 18. I stopped by for week two, on June 23, to check it out, stock up on snap peas and the last stalks of rhubarb, and enjoy a beautiful (albeit hot) night on the farm.

Between purchasing produce and eyeing the ice cream, I was curious what drew the vendors to the new market in such a tumultuous year. Was joining a new market a risky move with COVID-19 restrictions in place? And how were Isham and his wife, Helen Weston, navigating those evolving guidelines for markets, which the state Agency of Agriculture, Food and Markets updated again on June 19?

The new Phase 2 guidance allows farmers markets to function a bit more like farmers markets always have, while still operating safely. On-site consumption of prepared foods and entertainment are now permitted, following the state Agency of Commerce and Community Development's guidelines for restaurants and outdoor dining.

The space between vendor booths has been reduced to six feet apart — though at the sprawling Isham Family Farm, even the original 12-foot spacing was an easy box to check. (Pets are now allowed at farmers markets, too, though Isham Family Farm asks that customers leave theirs at home.)

Isham has been reading the state's updates closely and incorporating them into the market's plan. "I follow the guidelines very strictly," he told me — through his mask, from six feet away near the market's only entrance. "I'm constantly looking on the vermont.gov website, looking for what they're allowing. We feel it's important to follow what Gov. Scott is doing."

"We want to put the farm back into farmers market." Mike Isham tweet this

Weston agreed. "I've been so, so happy seeing everybody doing what is expected in Vermont when they're coming to the farm for this," she said, while greeting customers at the entrance with squirts of hand sanitizer from Caledonia Spirits' Barr Hill.

Isham said adapting his original vision for the market to the current reality has been easy. Based on feedback from the vendors and customers, he said people have seemed pleased so far. "Everyone's said they've been really comfortable, but if there's something we can do to help people feel a little safer, we're willing to do it," he added.

A steady stream of masked market-goers made their way from Weston's sanitizing station toward the barn. Along the way, hand-painted signs asked them to "Stay Safe and Healthy" and "Spread Love Not Hate." The signs also read, "Mask Please," "6 Feet Please" and "Please move through the market in one direction." Their politeness had me thinking, No wonder people are respectful of their reminders.

Vendors were set up in the gravel lot outside of the barn and spread out inside; the massive doors were open for ventilation and traffic flow. On such a muggy day, the barn's cool concrete floor and burlap-shaded windows offered sweet relief. I was tempted to linger inside, but that was against the rules, and I didn't want to be the only one breaking them. Thankfully, a gentle breeze blew through the shady lot, too.

The setup was different from the market's first week; vendors had been down in the field, but with the updated regulations and the heat, the barn made more sense. At the far end, on an elevated stage, musicians took advantage of the relaxed entertainment guidelines. By the entrance, customers stood six feet apart in line for early tomatoes, cauliflower and the late-season rhubarb.

I stopped to talk with Kristen Needham of Needham Family Farm, while her daughter Eileen sold prepackaged produce. "I don't want people reaching into the peas," Kristen told me. Farmers markets hadn't been in her farm's plan this year, but Kristen said that knowing the Isham family and the "beautiful spot" enticed her to give the new market a try. Even just two weeks in, she considered it a success.

"They've done a good job adapting," Kristen said. "Mike's been really accommodating, looking out for the vendors. I have a feeling there will be lots more vendors next year."

Next to the Needhams, Pedro Salas of Bee Happy Vermont was selling his honey, beeswax candles and honey lemonade. Before we were able to talk, he asked me to watch the stand for a minute while he ran to get his Square reader — the lemonades were $3.50, he said; the change was in the drawer.

He was back before my mental math skills were tested, luckily, and was accepting both cash and cards. Many vendors accepted multiple forms of payment, but, per the state's guidance, cashless payment is still required whenever possible. In addition to impulse lemonade purchases at the market, Salas also takes preorders online — an adaptation many vendors have been getting used to this summer.

Salas said he decided to attend the market at Isham Family Farm because he's free on Tuesdays. "So far I like it," he said. "There's good traffic."

Across the way, Sue Coffrin of Adirondack Yarns also commented that the turnout was great. Coffrin moved to Williston recently from Lake Placid, N.Y., and said she hopes her presence at the market will help get the word out that she's here. "It's so close to home; it's the easiest show I've ever done," Coffrin said. Plus, after a spring filled with virtual trade shows, "It's so nice not to be talking to myself," she said with a laugh.

On the one-way path around the market, the prepared-food vendors were the last stop. My husband (who did our shopping while I interviewed vendors) and I got a pizza from American Flatbread to share. In the separate designated dining area in an open field, we found an open picnic table that must have been a hundred feet from the next closest group of diners.

After dinner, we joined the well-spaced line for Sisters of Anarchy Ice Cream. Becky Castle and Lula Andrae carefully scooped our flavors into a compostable bowl and handed us a pair of spoons.

Company co-owner Castle was busy on such an ice cream-friendly night, so we caught up later in the week by phone. She said the first two markets at Isham Family Farm had been "amazing."

"Mike and Helen are awesome people," she continued. "Isham Farm is such a bucolic setting. It's quintessentially Vermont."

Sisters of Anarchy originally had 220 events on the calendar for this summer, but everything except this market, the Stowe Farmers Market and three weekly markets in Boston was canceled. Instead, they've had robust mail-order sales — what Castle called "a COVID bump" — and have focused on selling ice cream at their own farm in Shelburne.

As a prepared-food vendor whose product needs to be eaten quickly on a hot day, Castle was pleased with the updated guidance that allowed her to hand over the spoons. "We can actually scoop cones now, which is fantastic," she said. "Until the recent rule changes, we could only provide cups with lids on them."

Now, things feel "almost normal," Castle said. "If you had talked to me in May, before any markets started, I would have been very gloom and doom, because it was so frustrating to read the market guidance," she explained. "But now it's definitely opened up."

As we headed toward the exit on Tuesday night, full of ice cream and pizza and with a bag full of early summer delights, I thought of that normalcy, too. It doesn't get much better than hanging out on a farm on a summer evening, buying and eating food directly from farmers and producers.

That's what Isham and Weston envisioned and what drove them to host the market in the first place.

With a smile evident even through his mask, Isham said, "We want to put the farm back into farmers market."

"We're at a place in our lives, kind of at the end of our careers, that we want to give back," Weston added. "This is one way that we can give back and support our local farmers and craftspeople and community."

The original print version of this article was headlined "Getting in Early | Market Report: Isham Family Farm Farmers Market in Willston"