by Jordan Barry and Melissa Pasanen 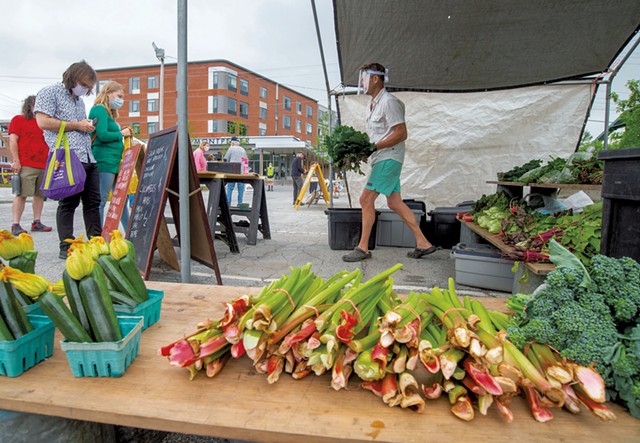 It's been a whirlwind spring for Vermont's farmers markets. On April 10, even as the winter season wrapped up and managers and vendors started making their summer plans, markets were temporarily shuttered under Gov. Phil Scott's "Stay Home, Stay Safe" order.

The fate of farmers markets during the COVID-19 pandemic remained up in the air for two weeks, while the Vermont Agency of Agriculture, Food and Markets developed guidelines. On May 1, markets were allowed to reopen with strict operating procedures, social-distancing requirements and sanitary protocols.

For some markets around the state, though, following those guidelines isn't realistic. According to the Northeast Organic Farming Association of Vermont — the parent organization of the Vermont Farmers Market Association — 10 Vermont markets have confirmed that they will take the season off, including those of Winooski, Shelburne, Burlington's Old North End, Waterbury, Vergennes and the University of Vermont Medical Center.

It was a tough decision, conceded Meredith Bay-Tyack, executive director of Downtown Winooski, the nonprofit that organizes the Winooski market. "As a smaller market, it may seem like we could pivot. But we did the math, and with our resources of budget and volunteers, we just couldn't," Bay-Tyack said. "It still hurts."

The markets that will forge ahead are changing their procedures and interpreting the state's guidance for their locations, vendors and communities. This season, farmers markets may not feel quite like the cultural touchstones we've come to know in Vermont. But, as NOFA-VT's website says, they'll be "local as usual, safe in new ways."

We'll be heading out to markets around the state this summer for a new series called "Market Report" — placing our preorders, following protocol, and checking in with vendors, customers and market managers. This week, we kick things off at Capital City Farmers Market in Montpelier, which has been in full — if altered — swing since May 2.

I carefully plotted my approach to Montpelier's Capital City Farmers Market in advance, using a map of vendor booths. Placing several online preorders worked pretty well, with one phone call and a couple of emails to iron out details.

Saturday, May 23, was a warm, sunny day, and I hoped capacity constraints wouldn't cause a long wait. (The market has a priority line for seniors and high-risk customers, as well as a preorder pickup table option.) But, at around 11 a.m., just one person was ahead of me.

Volunteer and market board member John Snell clicked me through as the 254th customer of the day after cheerfully briefing me on appropriate protocol.

The rules, also outlined on blackboards, boil down to walking in one direction and keeping the standard six-foot distance from both customers and vendors. Vendors place purchases on extra tables positioned six feet in front of each stand, creating a buffer. Face coverings are required.

It was the market's fourth summer Saturday, and things appeared to run smoothly. Customers gave each other a wide and respectful berth and generally heeded the "Please shop quickly!" request on a blackboard.

The subdued atmosphere was unsettling — but not as much to me as to Tony Naples, a commercial fisherman and owner of Burlington-based Starbird Fish. The first vendor I visited on Saturday, he later gave me his recollections of his first Montpelier market of this season.

With so few customers at a time, all masked and seeming nervous, it felt like "the most bizarre, apocalyptic experience in my life," Naples said.

On a positive note, he reported that sales have been OK so far. A couple of other vendors, including farmer and cheesemaker Maria Schumann of Cate Hill Orchard in Greensboro, said sales were on par with previous years.

Wearing a plastic face shield, Schumann brought out my preordered cheese, lamb and thick, Icelandic-style yogurt. While she is concerned about the lack of tourists, she said, "Locals are buying more." With eating not permitted in the market, she has saved money on samples.

A couple of booths away, I overheard farmer Alan LePage say, "This model doesn't work for all of us." LePage, who has farmed vegetables in Barre since 1976, helped found the market 43 years ago and serves on its board. In his signature chile pepper shirt, he is a market fixture.

"Social distancing essentially nixes markets as we know them." Alan LePage tweet this

LePage was eager to talk about how pandemic guidelines will impact his business, now run in partnership with his daughter. "My farm has been dependent on this market for 90 percent of our sales forever," he said. "The model of social distancing essentially nixes markets as we know them."

The push for preorders and the need to select items for each in-person customer handicap his business, he said. With as many as 100 different items at peak season, it's all "exponentially more work." The LePages are considering adding a roadside stand at the farm for the first time.

LePage said it seems unfair to him that supermarkets are not required to restrict access, although he understands that the public perceives farmers markets differently, as "social affairs." He acknowledged, "I don't have answers."

Market manager Keri Ryan was buzzing around keeping an eye on everything. She said later that the market's new, more spacious Taylor Street location has helped it meet layout requirements, but the number of vendors will average 40 this year instead of the normal 60.

Customer numbers are also down significantly. And, while many vendors' sales are holding steady, those who rely on tourists are suffering. "People are coming to buy food, which is the point," Ryan said.

Longtime vendor Laini Fondiller, of Lazy Lady Farm in Westfield, gave Ryan credit for strong leadership while noting wistfully that she misses the regular market vibe. "There was a social piece for me that's gone now," she said. "It's hard."

By the time I reached Lazy Lady, from which I'd preordered cheeses and steak, my bags were heavy with milk, cheese, vegetables, mushrooms, frozen fish and meats, and one tomato plant I was trying hard not to crush.

Focused on my grocery list, I bypassed prepared-food vendors, but later I chatted with a couple.

Grace Holter of Warren-based Gracie's Tamales has a decade of farmers markets under her belt. She said she's been gratified to see many of her regulars and has noticed people managing to be social within the limitations. "It's still a happy place," she said.

Regular market customer Gwenivere Roolf-Cluett of Montpelier said she actually likes the new format. "I love the farmers market, but the usual market I find overwhelming," she said. "I find this kind of market much easier to shop at."

Her friend Michelle J. Rodriguez, on an extended visit from Brooklyn, added, "As we have all had to pivot in our lives, to feel we can safely access high-quality local food is a comfort."

Burlington Gears Up With PPPP

As it prepares to open for its 40th season on Saturday, June 6, the Burlington Farmers Market is encouraging shoppers to practice "the four Ps" — plan, preorder, pick up, prepare.

"We're trying to shift customer behavior," market manager Mieko Ozeki told Seven Days. "If people want to feel secure about being at the market, this is what we have to do."

The market will host 45 vendors, including several craft vendors, in the parking lot at 345 Pine Street, where it temporarily relocated last summer due to construction in City Hall Park.

The expansive lot is proving a useful location for the pandemic-era version of the market. Vendors will be spaced out in a reconfigured U-shaped layout to maximize social and physical distancing, with one-way traffic between a single entrance and exit. Ozeki estimates that the layout will accommodate 250 people at one time. Market staff will monitor the spread of shoppers and plan to admit 30 people every 10 minutes.

"We're going to be constantly iterating," Ozeki said. "We're trying to make it as efficient and safe as possible for our vendors and for the community."

Here are a few more "P"s you should know as you pack your tote bags and plan your trip to the market.