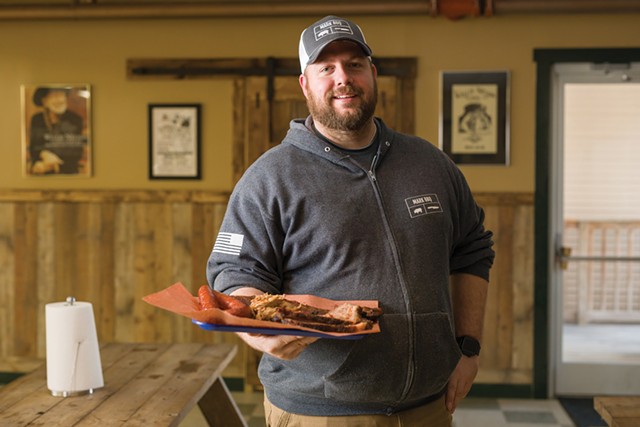 The team at Mark BBQ slung its final heaping plates of Texas-style barbecue at the Essex Junction restaurant on Friday, almost four years to the day after it opened. Chef and co-owner Darrell Langworthy said Mark BBQ will reopen in Colchester in December, next door to the Guilty Plate Diner, which he and his wife, Sarah, run at 164 Porters Point Road. Until then, Langworthy said fans can satisfy their 'cue cravings at the diner, which will temporarily add a full range of barbecue to its menu.

The Langworthys' second Essex Junction restaurant, Heart n Soul by Mark BBQ, has closed permanently. It will become the group's catering arm, offering everything from Italian to Brazilian food from a new prep kitchen in Colchester.

Mark BBQ's move was driven partly by the availability of a large suite beside the Guilty Plate Diner, Langworthy said. The couple took over the diner's lease this summer from the Alvanos family, who opened it in 2013. Mark BBQ will gain about 500 square feet of space in its new spot, for a total of 45 to 50 seats.

Langworthy said the new proximity of the two restaurants will also help with staffing shortages. "It's not looking like it's going to get any better soon," he said of the current labor challenges in the restaurant sector.

"With all our staff in one area, we can borrow people from the barbecue [spot] when the diner is slammed and the other way around," he said. "We can get it all done without straining our staff."

Essex Junction fans of Langworthy's fare should take note that the barbecue will be back in town for the summer season, starting in May 2023. Langworthy has already rented the parking lot at 19 Park Street for his Skreet Doggs hot dog truck and Mark BBQ trailer.