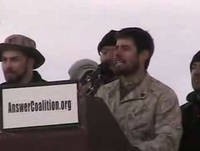 NEW YORK, N.Y. — A mock patrol like the one staged in midtown Manhattan last Sunday could result in Vermont antiwar activist Liam Madden’s being slapped with a less-than-honorable discharge from the U.S. Marine Corps.

Madden, a 22-year-old Iraq combat veteran, was recently warned in writing that his discharge status could be downgraded. The threatened punishment stems, the Marine Corps indicated, from Madden’s involvement in a March protest in Washington and from “disloyal statements” he allegedly made — perhaps on that occasion.

Madden won’t discuss his case on the advice of his attorney, and he was not on hand Sunday for the New York reprise of Operation First Casualty, the defiant guerrilla-theater event organized by Iraq Veterans Against the War.

But IVAW member Adam Kokesh, who is facing charges similar to Madden’s, did take part in the Memorial Day Weekend escapade in New York and was willing to speak about the Marine Corps’ actions against himself and Madden.

Kokesh is a 25-year-old reservist from New Mexico who was honorably discharged from active service last November. He says “intimidation” is the Marines’ purpose in “harassing” him and Madden. “They’re not going to succeed in scaring people already committed to the cause,” Kokesh promises. “But what’s happening to us could have a chilling effect on vets and active-service people not yet involved” in antiwar activities. He notes, for example, that he could be forced to repay college tuition financed by the military.

Back in Vermont, IVAW member Matt Howard, who also served in the Marines, agrees the U.S. military is using “scare tactics” in an attempt to “squash this form of protest and to set a precedent.” The charges against Madden and Kokesh “show the degree to which they’re scrambling to shut people up,” Howard says.

Amadee Braxton, IVAW’s Philadelphia-based director of organizational development, suggests that Madden may have come under attack because of his leadership in organizing the Appeal for Redress. That petition to Congress, signed by hundreds of active-duty service members, called earlier this year for an immediate U.S. withdrawal from Iraq.

Braxton also points to Madden and Kokesh’s planned involvement in a “Bring the War Home” bus tour of 20 East Coast military bases this summer. That agitation might be construed by the Marines as a further indication of Madden’s “disloyalty,” Braxton says.

Kokesh has been ordered to attend a June 4 Marine Corps hearing in Kansas City on charges that he violated military law by wearing his uniform in the March demonstration and by “disrespecting a superior officer.” The latter accusation results, Kokesh says, from an email message he sent to a Marine major in response to an earlier notification that this officer was investigating Kokesh’s involvement in IVAW protests.

“I concluded my reply to the major by telling him to go fuck himself,” Kokesh explains.

It appears that Madden has not yet been scheduled for a similar hearing. “They messed with the wrong vet,” Kokesh declared as he prepared to join eight other Iraq war veterans in Sunday’s roving series of street theater enactments. He was wearing an olive-green muscle shirt and Marine Corps camouflage pants with his name stitched on a flap above the right rear pocket. It was his similar regalia at the March protest that led to the threat against Kokesh’s honorable discharge.

Madden has been equally outspoken and visible in his opposition to what he has described as “the 4-year war crime” perpetrated by the United States in Iraq. “Our protests will not end this war,” Madden declared in a March 19 speech outside the Pentagon on the occasion of the fourth anniversary of the U.S. invasion of Iraq. “Only our tangible resistance, our determined risk-taking and our bold civil disobedience can deliver a message capable of reaching our paralyzed nation.”

Sunday-morning strollers in Central Park were assailed with that message as Kokesh and the eight other partially uniformed vets recreated a combat patrol in Iraq. The men moved warily in formation, sometimes crouching into firing position with their arms positioned as though they were pointing rifles. Suddenly they sprang into a sprint and bear-hugged a few white-shirted “civilians” who screamed in terror as they were thrown to the ground. These IVAW collaborators were forced to lie face down in the Central Park dirt with white plastic bags tied over their heads, their wrists pinned behind their backs with white plastic tape.

“Shut up! Don’t move!” the vets yelled at their captives as passersby looked on with expressions of fear and befuddlement. Meanwhile, IVAW volunteers handed out pamphlets explaining what was happening and urging active opposition to the war.