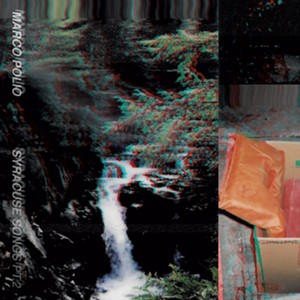 A rich tradition in pop music is crafting records as reflections of cities. Lou Reed, for example, set his hopeless opera Berlin in the titular German city. Nas' Illmatic gave the world a first-person tour of Queens. When talented songwriters seek to embody the cities they're living in, the results can be anthemic.

For Marco Polio's Matt Hall, the city occupying his mind is Syracuse, N.Y. It's a lingering obsession. His band's latest album, Syracuse Songs Pt. 2, serves as a belated sequel to 2009's self-released Syracuse Songs, which Hall described as "eight songs and poems about living in the city." Pt. 2 was also written in 2009 but only recently recorded. Hall terms the follow-up as "a collection of songs about living and loving in Syracuse."

Perhaps it's the natural whimsy of youth — or the nostalgia of playing songs that are eight years old — but Pt. 2 is a good deal gentler than Marco Polio's ferocious 2016 album, Wait and See, which was a raw blast of punk-rock anger. Though Pt. 2 starts with an up-tempo rocker, "Art Crush Song," it's clear that Hall is dwelling in more romantic pastures — or at least he was back in 2009.

"The dust gathered around like a halo," he sings over a Replacements-like stomp. "The hot light cutting through all the darkness in that upstairs room / I think I'm so in love with you."

From there, the album pushes off toward a folk-rock sound — though Hall's almost unhinged voice keeps an edge on even the softer material, such as "River Song." "If I feel your healing touch, maybe I won't hurt so much," he sings. Here and elsewhere on the album, his delivery has a plaintive urgency that gives his stories emotional authority.

Sam Egan is back playing drums and bass, but the band now features some new faces: Austin Petrashune on guitars, bass, keys and violin; Kristen Petrashune on backing vocals; and Alicia Macier on violin. The group eschews lushness in favor of colorfully accenting Hall's angular songwriting.

At times Pt. 2 lags in energy as Hall studies his old city with a feeling of remove, as if viewing it through the smudged windows of a city bus. But the album finishes on a strong note with "Ghost Song." It begins on flowing waves of acoustic guitar with Hall wondering, "Would it be all right if I just drove this fucking car off the road?" But the song culminates in garage-rock bombast as Egan comes crashing in on the drums, and the guitars go into overdrive — perhaps signaling Hall's exodus from the city.

Syracuse Songs Pt. 2 by Marco Polio dropped on Halloween. It's available at marcopolio.bandcamp.com.