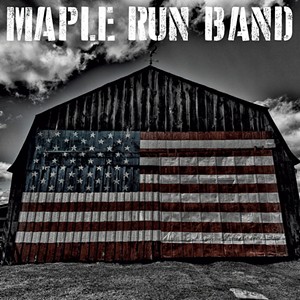 Maple Run Band are a Vermont country outfit blessed with taste and chops. For this reviewer, that came as a tremendous relief. In a bleak era, when so-called "country radio" has devolved into dog-shit pop rock, this crew stays true to the original formula: honest songwriting, tight arrangements and outstanding musicianship. Maple Run's self-titled debut is a triumph, establishing them as one of the 802's foremost practitioners of the genre. Ever.

Granted, the local competition is sparse. Lead singer and sole songwriter Trevor Crist is a Kansas transplant, but he's been kicking around the Green Mountains for years. And if Maple Run sound like they've been honing their chops for decades, well, that's partly true. A thousand years ago — in the '90s, when Good Citizen Magazine was still a going concern — Crist was in an alt-country-rock outfit called Construction Joe.

The sound here is pure Americana, ranging from up-tempo honky-tonk stomp to gloriously sparse ballads. It's a remarkably balanced set of strong songs, perfected over many live shows. Even the sole cover song, Roger Miller's "Engine Engine #9," is transformed from a breezy classic into something dark and haunting.

Crist, who considers John Prine a "patron saint," sings, "The last time I cried was the day when Johnny Cash died." Those are some mighty high influences, and Crist mostly succeeds at measuring up to them. "Queen of Labrador City" is a lovely, understated portrait that leaves you hanging on every word. "Last of the West Kansas Cowboys" pits powerful storytelling against soaring lap steel work from David Kamm (who was also in Construction Joe). Evoking Steve Earle as much as Joe Ely, "Borderline" demonstrates that Crist can rock out, too.

The rest of the band is also dynamite. Crist has a modest singing voice, but it suits the material perfectly, and his guitar work is superb and transparent. Bill Mullins' lead guitar steals the show with melodically inventive solos. And whenever Kamm steps in, he is indeed a special guest.

Maple Run's real secret weapon, though, is multi-instrumentalist Nicole Valcour. A veteran of Vermont's music scene — including Construction Joe and Swale — she's flawless on the drum kit and even better on backup vocals. Having lavished so much praise on the rest of the band, I almost feel awkward saying that John Spencer holds it down with no frills, but, by God, when you're playing bass in a country band, that's your job.

This is a seriously impressive debut. Crist has evolved into a mature, potent songwriter. Not merely a tribute or fan-art pastiche, every track here is simply authentic country music. And America — or at least Vermont — is better for it.