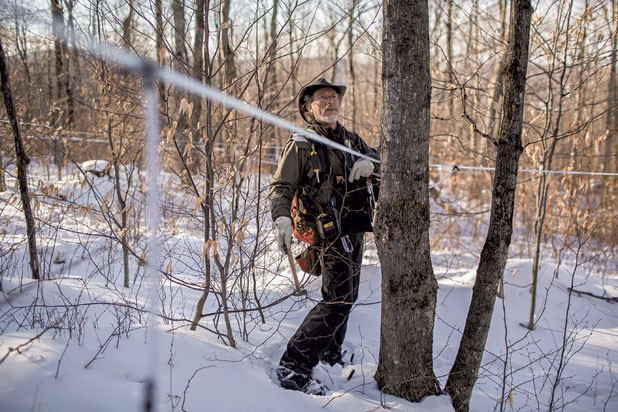 Vermont’s maple syrup industry may be rich in tradition, but that hasn’t stopped its producers from embracing new technologies. Sap buckets have given way to plastic tubing, four-wheelers have replaced horse-drawn sleighs, and many modern sugar “shacks” are, in fact, studies in the utility of expensive, high-tech equipment.

But one thing has remained the same: As their forbearers did for centuries, sugar makers rely on the forest — and stately stands of mature maple trees — to produce their liquid gold.

New research out of the University of Vermont’s Proctor Maple Research Center suggests that sugar makers could instead harvest maple sap — which gets boiled down into syrup — from densely planted fields of young maple saplings.

“It’s essentially taking what is now a near-wild crop” — rooted in the forests — “and turning it into an orchard,” says Proctor director Tim Perkins. Together with research assistant professor Abby van den Berg, Perkins made the discovery that’s now rocking the maple world.

The Vermont researchers estimate that one acre planted under the new “plantation” method could yield more than 400 gallons of syrup — 10 times what a traditional, mature sugar bush yields.

That is piquing the interest of sugar makers — some who imagine planting maples like row crops and others who see new potential for the shrubby saplings on marginal fields or forestland. Perkins said he’s been approached by a few who’ve told him, “‘I want to do this now. How do I get started?’”

“Really, the answer is, ‘You can’t,’” says the researcher. That’s because the equipment used in UVM’s studies isn’t yet commercially available and won’t be for at least two years.

It’s a sweet dream — that will soon be a reality.

Perkins and van den Berg made the discovery while studying the movement of sap in maple trees. The aim was to improve its collection through different tubing techniques. As part of the research, they removed the crowns from some small saplings and jerry-rigged a tap that covered the exposed trunks. Under vacuum pressure, the saplings yielded a surprising amount of sap.

Most importantly: It was sweet. “I have not tried syrup made from this, but physiologically there is basically no difference in the sap that is going to be collected from these little guys than mature trees,” says van den Berg.

The “plantation method” would necessitate keeping maples perpetually immature. The saplings would re-sprout in the spring, only to be shorn again almost a year later, before the next sugaring season.

Perkins and van den Berg don’t envision the new method replacing the current system — just augmenting it. Perkins says somewhere in the neighborhood of 75 to 80 percent of the best sugaring land in Vermont is already being tapped, which limits future production. Planting maple “orchards” would let sugar makers grow without having to buy new land or tap marginal forests.

The saplings could also potentially offset, to some degree, the threat of climate change to Vermont’s maple industry. The saplings still require a cycle of freezing and thawing to yield sap. But smaller trees are more sensitive to slight changes in temperature, so they could potentially produce sap in less dramatic freeze-thaw conditions.

Meanwhile, researchers at both UVM and Cornell University continue to look for maple trees with superior genetics — specifically, those that naturally produce sweeter sap. Higher sugar content in the sap means more syrup per tree.

If that happens, there’s a good chance the economics of plantation-style sugaring could turn out to be more favorable than the existing method. Right now they are roughly equivalent, according to van den Berg.

That’s precisely what worries Laura Sorkin, who together with her husband, Eric, owns a large organic sugar making operation in Cambridge and Underhill. Sorkin wrote about the maple breakthrough for the publication Modern Farmer, expressing deep ambivalence about what the new research could mean for the industry.

“The implications are enormous,” says Sorkin, “and if it really does come to pass, then I think the traditional method of collecting maple syrup is going to change.”

Of course, “traditional” is relative. Few commercial sugar makers today still use the iconic galvanized buckets to collect sap. Most rely on a network of tubes that snake through the forests. Those, in turn, are hooked up to vacuums, which increase sap yield by 50 to 200 percent. Back in the sugarhouse, syrup producers run sap through high-tech reverse osmosis machines to remove as much as 85 percent of the water from the sap, reducing the boiling time required to distill sap into syrup.

More changes might be on the horizon. Sam Cutting IV, the president at Dakin Farm in Ferrisburgh, says some producers are going after voluntary certifications and inspections to meet modern food safety standards. He predicts that packers, such as Dakin, will start asking that of producers in the coming years. “We do have to change with the times,” says Cutting.

The Sorkins, and most other commercial sugar makers in Vermont, have embraced the new technology. “Innovation is a good thing,” says Sorkin. New methods make sugaring easier and more profitable; they’ve elevated sugaring from a part-time pastime to a viable livelihood for many producers.

But Sorkin says the new research is “bigger than buckets to tubes.” While other advancements have tweaked operations in the woods or the sugarhouse, this is different. The forest itself is threatened.

“To me it comes down to this,” says Sorkin. Aside from fishing, she says, sugaring is “the last wildcrafted crop that is commercially done in North America … For that to disappear is just really sad.”

It’s not tradition that worries Cutting; it’s dollars and cents. He says the industry needs to make sure there’s enough demand for maple syrup before it dramatically ramps up production. Last year was a record-breaking year for the crop in Vermont: 1.3 million gallons. The number of producers is still growing at a rapid clip. Cutting mentions a Canadian outfit putting in 200,000 taps near Morrisville. Another big operation is going live in Killington.

“There’s a lot of people adding 20,000 taps, 40,000 taps,” says Cutting — “just huge numbers. The industry is already growing by leaps and bounds.” Underlying his concern is a simple fact: The high cost of maple syrup — which is generally between $40 and $50 per gallon — depends on demand for the sweet stuff exceeding supply.