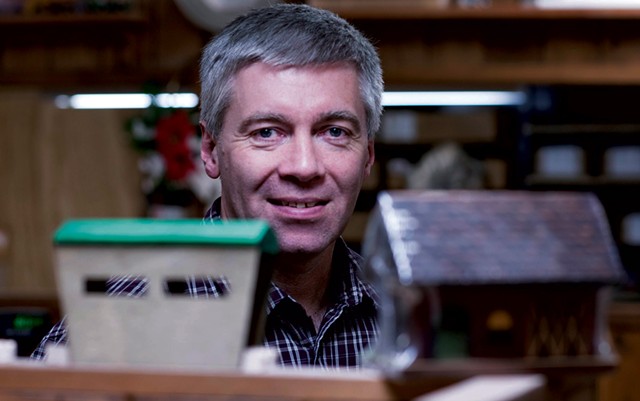 In the second-floor assembly room at Maple Landmark Woodcraft in Middlebury, employees sit in rows of workbenches and busily pound wheels and magnets onto NameTrains, the company's alphabet-letter cars that connect to form names and words. Once each wooden car is completed, a worker at the end of the assembly line zooms it down a rainbow-colored ramp to make sure all the wheels turn properly.

The workers don't dress as elves or whistle while they work. Still, as they hammer the toys with wooden mallets, a playfully busy mood prevails, as though nothing is more fun during the holiday season than assembling 3,000 wooden letters per day. Watching the workers make the NameTrains, which have been Maple Landmark's best-selling product since their introduction in the early 1990s, may remind an observer of the elven toy makers in the TV holiday classic "Rudolph the Red-Nosed Reindeer."

"I've been lobbying for the red hats and curly-toed shoes, but so far I haven't had much success," quips sales manager John Gallagher. He's giving this reporter a tour of the company's soon-to-be-expanded manufacturing plant on Middlebury's Exchange Street.

This is one of Gallagher's favorite duties. On any given day, a tour bus might be parked outside, carrying 40 or more children eager to see the factory's inner workings. "It's a blast to come through here with kids on the tour," he says. "They love it!"

Maple Landmark differs from many of the other manufacturers in this Addison County industrial park. Unlike the neighboring producers of consumable goods — Woodchuck Hard Cider, Cabot Cheese Creamery, Otter Creek, Stonecutter Spirits, Vermont Coffee — Maple Landmark makes toys and gifts that are meant to last a lifetime.

Despite such anecdotes and the life-size toy train parked on the front lawn, company founder and co-owner Mike Rainville says he never envisioned Maple Landmark solely as a "toy company." The company currently produces about a thousand different eco-friendly products ranging from cribbage boards to cutting boards, baby teethers to trivets, corporate plaques to beer-tap handles. They're sold throughout North America, often to museums and gift shops.

In an era when countless American toy and gift manufacturers have outsourced their operations overseas to reduce material and labor costs, Maple Landmark has thrived, carving out a niche and winning awards. The vast majority of its materials are still sourced from Vermont and Maine.

Buying local is a major draw for the many Vermont companies, nonprofits and community groups that contract with Maple Landmark for custom items. That work now represents the fastest-growing sector of Maple Landmark's business, and its client list reads like a who's who of Vermont companies: Ben & Jerry's, Trapp Family Lodge, Cold Hollow Cider Mill, Champlain Orchards and Vermont Country Store, to name a few.

"There's probably not a company around that we haven't done work for," says Rainville.

All that work has left Maple Landmark bursting at its seams. So, a few months ago, the company broke ground on a $2.3 million expansion project that will nearly double the size of its manufacturing space — and allow room for future growth.

Does that mean its staff will also grow beyond the current 42 employees? "The expansion will allow us to actually fit 42 people in here," Rainville says. "We ran out of space years ago."

Rainville, 52, is the classic entrepreneur who seems happiest when he's thinking up new products and innovative ways to build them. In the company's first-floor woodshop, which buzzes with routers, sanders and sawdust vacuums, two wooden contraptions that resemble Ferris wheels turn slowly inside a makeshift chicken-wire cage. The first wheel sands wooden parts smooth, like a rock tumbler; the second soaks up excess stain. As Gallagher explains, Rainville couldn't find anyone who made such tumblers, so he built them himself.

In a nearby break room sits a large, 3D wooden schematic, which Rainville also made, showing the configuration of the new workspace currently under construction at the back of the building. Though his employees could have perused the proposed blueprints on a computer, Rainville decided it might be easier for them to see and touch the plan and then suggest improvements of their own.

He has always been good with his hands. As the story goes, Rainville began making toys as a child when, after he got on his mother's nerves, she finally told him to "go find something to do."

He did. Rainville began by crafting wooden toy cars, trucks, trains and cribbage boards in the basement of his parents' home in Lincoln. By the age of 15, he was selling his products wholesale.

"We charge extra if she paints 'Vermont' on it," Gallagher says.

The latter is a petite, smiley woman with short white hair and a Lilliputian voice. Standing at her workbench, she's not even tall enough to change the calendar on the wall, which still shows November. Below it hangs a picture postcard of the one-room schoolhouse in Lincoln where Brown taught for many years before "retiring" to this job.

When Seven Days visits, Brown is happily gluing wooden smokestacks onto toy train engines. Despite her age, she's on her feet all day and insists she doesn't mind it.

"They keep her busy up here," comments a nearby coworker.

"They say he's here to work," Brown replies to her coworker's remark. "I think he's just here to keep an eye on me."

Maple Landmark's staff has longevity; many employees have worked there for more than a decade. They include Bob Bougor, 69, who's been with the company for 15 years. He looks like a character straight out of Santa's workshop: short and stocky with bright blue eyes, a gray goatee and a jolly smile. He's clad in a sawdust-flecked flannel shirt and green smock.

Bougor has many responsibilities at Maple Landmark, including purchasing and inventory control. But his favorite role, he relishes telling visitors, is that of official "toy breaker."

Whenever the engineering department develops a new product, Bougor explains, an independent safety lab must test it before it can go on the market. Before Maple Landmark sends a product to the lab — at $300 to $500 a pop — Bougor puts it through his own rigorous battery of tests. That means repeatedly dropping the item from federally specified heights onto a tiled floor.

"If I break it, that means it has to be reengineered," Bougor says. "And I'll keep doing that until it doesn't break anymore."

Rigorous testing makes sense for a company that makes products such as blocks, baby rattles and teethers that will inevitably end up in children's mouths. But Maple Landmark hasn't always been as upbeat about the product safety requirements as Bougor's attitude suggests. A few years ago, tightening of those requirements nearly drove many small toy makers, including Maple Landmark, out of business.

Following a record year for safety recalls of children's products due to choking hazards, lead contamination and lethal design flaws, Congress enacted the Consumer Product Safety Improvement Act of 2008. Initially, the recalls spelled good news for American toy makers. Since nearly all the toxin-tainted products that year had been mass-produced in China or other Asian countries, locally made goods such as those of Maple Landmark, which uses all-natural materials, looked better and safer to consumers than their competitors'.

However, the CPSIA, which passed with scant industry input or congressional debate, mandated extensive third-party testing to detect banned substances, even if a product had no rationale for containing the banned chemicals. All-wood toys, for instance, had to be tested for plastic softeners.

Rainville eventually found an independent lab that agreed with a more generous interpretation of the new law. According to his reading, Maple Landmark can, say, test each new wood stain, rather than individually testing each of the dozens (or hundreds) of new products to which the stain is applied.

"That was the difference between doing something that's affordable and something that was going to cost us $1 million a year," Rainville says. "I have no issues with the regulations in place. People need to be safe. It just needs to be fair."

Luckily, the Consumer Product Safety Commission agreed with Rainville's interpretation, too. These days, he's free to devote his efforts to more pleasurable pursuits, such as thinking up new product ideas.

About four years ago, Maple Landmark formed a new-product design committee that includes employees from all departments. Among the more successful suggestions, Rainville says, are those born from contemporary photo culture.

In recent years, those have included Silly Sticks: wooden mustaches, glasses, hats and lips that people hold up when taking selfies. In the same vein, Portrait Props are wooden blocks that can be arranged to show a child's age in weeks, months and years.

When asked what the next big trend will be, Rainville just shrugs. Right now, he's focused on the factory expansion and getting through the holiday crunch.

"Our employees are getting overtime, which they like," he says. "If we get to Christmas and we haven't had that adrenaline rush, then something isn't right in the world."