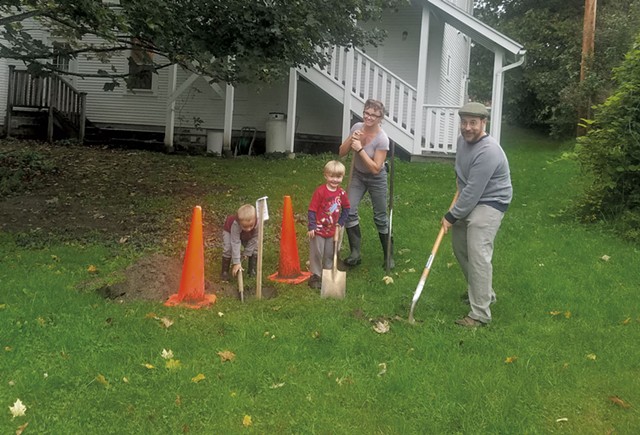 A community that once bonded over a calendar featuring naked men has again come together — this time in search of a missing septic tank.

Jamie Moorby called on the residents of Maple Corner, a village in the 1,600-person town of Calais, to help her unearth the missing turd tomb. Moorby is the operations manager for the Maple Corner Community Center, which raised funds for a new septic tank in 2002 by getting a buncha hunks to strip down for a Men of Maple Corner calendar.

"While she's been a reliable member of our community for the intervening 16 years, it's time for some routine medical treatment," Moorby wrote on Front Porch Forum last week. "Sadly, Ms. Tank is missing."

The calendar, according to Moorby, "went viral before going viral was a thing." The Maple Corner men appeared on the "Today" show — twice. Letters and requests poured in. Moorby shared the title of Mr. August with her grandfather. (A transgender woman, she transitioned in 2006).

The calendar's popularity led to a second one the following year. All told, the community raised nearly $500,000, some of which went to the new septic system.

But no one kept track of where it was buried.

Moorby was stumped when she discovered that the burg's 2002 septic map was missing from the Calais Town Hall. She called local companies that could have buried the thing. She searched the community center for documents.

Eventually, she got out a shovel and started digging. Moorby even recruited friends to take part in the treasure hunt.

Last week, she resorted to the FPF posting. Among the dozen or so responses, most of which thanked her for a good laugh, was one from former town clerk Donna Fitch. She'd found a box of community center files in her attic, and among them was a map to the septic system.

An ecstatic Moorby located the tank and scheduled Fowler Septic Service to come pump it out on October 12.

As for Fitch, she can pick up her reward any time: A Men of Maple Corner calendar and a roll of recycled toilet paper.

The original print version of this article was headlined "Septic Surprise"