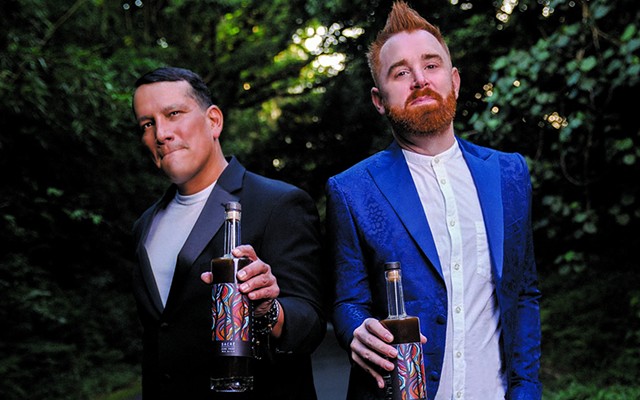 Alcohol sales spiked when the pandemic hit in 2020, garnering publicity from the press and concern from public health officials. While demand for beer, wine and spirits has waned since then, sales of their nonalcoholic counterparts is growing exponentially.

In the year that ended on January 29, U.S. alcohol retail sales dropped by 4 percent, but sales of nonalcoholic adult beverages rose by 27 percent, according to data analytics firm NielsenIQ. The gap was even wider in Vermont, where alcohol sales dipped by 6 percent and nonalcohol sales jumped by a whopping 49 percent.

Surfing the wave are Justin and Roger Branon Rodriguez, the married team who created Sacré, a maple- and coffee-based nonalcoholic spirit produced at Justin's family's sugar farm in Fairfield. Designed to be chilled, shaken and sipped as is, the zingy, earthy, aromatic elixir first released in 2019 defies expectations. It's maple but not sweet, a zero-proof drink generating a 100-proof buzz.

In 2020, Rachael Ray In Season named Sacré one of four new alcohol-free spirits "shaking up the mocktail world." In 2021, it won a gold medal in the L.A. Spirits Awards, and the New York Times product review website Wirecutter proclaimed it one of the best nonalcoholic drinks.

"We've truly never tasted anything like this," Wirecutter wrote. "Taking a small sip is like throwing back a tequila shot or diving into a freezing pool: It's a full-body experience, a shock, a thrill, something you want to never do again and yet can't get enough of."

Reviewers can't seem to agree on exactly what Sacré is. An aperitif? A digestif? Retailers sometimes ask in what section they should shelve it. "It's somewhere between an amaro and Kahlúa," says online site Master of Mocktails, "or between unsweetened iced coffee and balsamic vinegar."

Justin and Roger call it mysterious. Suzan Eraslan, a mixologist of nonalcoholic beverages, took that one step further: "It's not just mysterious," she wrote in her e-newsletter 5PM Eternal, "it's sorcery."

Sacré's birth story, like its flavor profile, is complex. And, like many a good cocktail, it comes with a twist.

Roger had married into the Branon family, a clan of doers and inventors. Their farm, Branon Family Maple Orchards, is a veritable maple makerspace. With the exception of pouring the concrete, the family built their 11,000-square-foot sugarhouse and the shop across the drive. 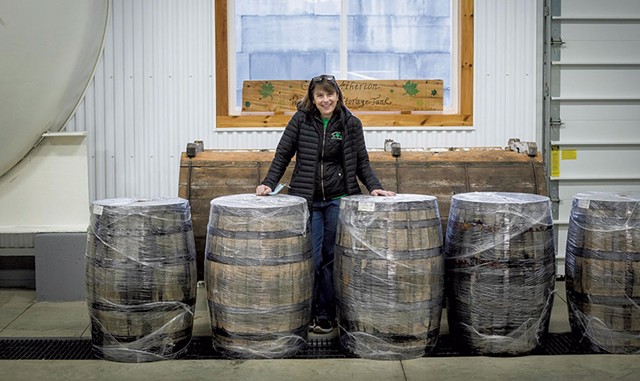 Justin's mom, Cecile Branon, has developed an entire line of maple products: sauces, sprinkles, rubs, jelly and vinegars. Her youngest son, Evan, invented Precision Tapper, a device that stabilizes a drill so that it creates a perfectly round hole, which allows for a tighter seal around a tap, boosting syrup production.

"I was like, Well, I want to make something," Roger said.

He started to experiment with making acerglyn, a mead made with maple syrup and honey. The Branon family owns 4,800 acres, taps 94,000 trees and produces more than 50,000 gallons of organic syrup in an average year. "I thought, Well, you know, we can ruin a couple gallons of syrup and it's not going to hurt us too badly," Roger said.

He picked up a carboy and got started. "I put in some orange rinds. I put in some cinnamon — you know, all the stuff that would go into a mead — and started to age it. And I posted about it online."

Justin's cousin Lisa Witzke informed her friend Niki Mohrlant about it because Mohrlant was a consultant for Distill Ventures. The London-based "drinks accelerator" that supports entrepreneurs in creating spirits was running a contest. The company would select five nonalcoholic beverages, work for a year with those makers to refine their products and then award the creators of one drink a monetary prize.

In addition to acerglyn, Roger was experimenting with drinks made from the maple vinegar Justin's mother produces. When she ran out of it, she offered them her bourbon-barrel-aged maple vinegar. When they tried it, Roger said, "We were like, Whoa, this is it. This is going to be the base for our drink."

"Nothing really kind of hit," Roger said. "And then we went to a cousin's wedding." (Justin has many cousins. "My family reunions are, like, 500 people," he said.) His cousin Emily Haddad's family owns a coffee shop, so her wedding-guest favors included a bag of coffee.

The Distill Ventures contest deadline was approaching. "We just happened to have this coffee on the counter next to this maple vinegar," Roger said. "And I thought, Well, what happens if you do this?" — that is, combine them. "And that was the start of Sacré. It was kind of a happy accident."

Here's the twist. The maple-coffee drink wasn't the one they intended to submit; they thought that another beverage they'd made was better but threw in the coffee concoction because it was there.

The judges "weren't crazy about my original submission," Roger said. "But when they tried the coffee one ... they said it literally stopped the show. The founder of Distill Ventures stood up, and he held the sample in his hand and said, 'Who made this?' And we immediately won the bursary."

Justin and Roger used the $12,000 prize to buy an industrial coffee grinder, a mixing tank, and bottles and labels for their first run. They also spent a large portion of the money shipping samples to London, where consultants helped them refine their drink, remove some of its sweetness and achieve a better balance. The final product contains five ingredients: aged maple vinegar, maple syrup, coffee, and two secret ones — a spice and a botanical.

Why name the product Sacré? Because Justin had grown up learning that maple syrup was a "sacred liquid" that helped Native Americans survive harsh winters. Syrup freezes at a lower temperature than water does, he explained, so it provided a vital sugar source. The couple's company name, Woodnose, is a nod to a fable about the woodpecker teaching people to tap maple trees. 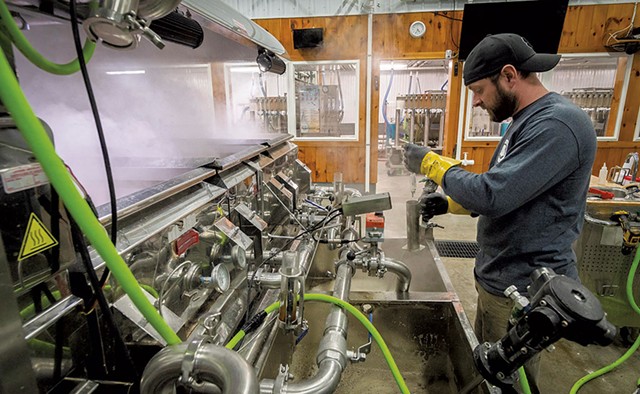 With 100 bottles produced, Justin and Roger headed to New York to launch Sacré in 2019. They'd heard that a new nonalcoholic bar called Getaway had opened in Brooklyn, so they dropped off a bottle. Sometime later, Derek Brown walked into the bar and tried it. The founder of former Washington, D.C., cocktail bar the Columbia Room and author of Spirits, Sugar, Water, Bitters: How the Cocktail Conquered the World, Brown started selling Sacré. (The Columbia Room recently closed.) He keeps a bottle at home, too.

"I like it on the rocks," Brown told Seven Days. He also puts it in cocktails, mixing it with lemon and simple syrup. "It can also kind of make a funky espresso martini," he added.

Sacré has a bite, a piquancy, Brown observed, "and that's what I think works best about it." But it also has sweetness and bitterness. "These are all characteristics of a good adult, sophisticated beverage."

Brown mentions Sacré in his latest book, Mindful Mixology: A Comprehensive Guide to No- and Low-Alcohol Cocktails, released in January.

Neither Justin nor Roger set out to make spirits. Justin, 34, studied fashion merchandise and marketing and lived in Boston and Los Angeles before returning to Vermont. Roger, 51, planned a career in the U.S. Air Force but was forced out under the military's "Don't Ask, Don't Tell" policy. He moved to Lake Placid, N.Y., and studied computer science and graphic design before moving to Burlington in 2000 for a computer programming job.

The couple met through a dating app in 2011. They may seem like an unlikely pair. Justin, son of a fifth-generation Vermont farmer, grew up feeding cows, cleaning stalls and riding on the back of a horse-drawn sled into the woods to help collect sap. Roger, son of a 25-year Air Force veteran, grew up on Hickam Air Force Base on Pearl Harbor in Hawaii and spent two of his middle school years in South Korea. He helped around the house, sang in the Honolulu Boy Choir and poured Mrs. Butterworth's on his pancakes.

The pair bought a farmhouse on 22 acres in Bakersfield and married in 2015. Justin worked for wine distributor Artisanal Cellars and Roger worked as a UX (user experience) designer.

Last August, they sold everything and moved to Hawaii. Roger wanted to show Justin where he grew up. And they've begun working on a new drink — a Hawaiian spin on a maple-based beverage.

Sacré remains firmly rooted in Vermont; Justin plans to return twice a year to make it. Their next beverage will benefit from all they've learned producing the first.

"It's all about hitting all those notes in the mouth: the sweet, the sour, the savory," Justin said, "and then also the mouthfeel, the roundness, the complexity, the acidity that makes your cheeks perk up and makes you want to take that second sip."

"But also, we want it to be weird," Roger added.

"Yes," Justin said, "because that's kind of our thing, you know. We wanted to make maple weird."

Correction, March 3, 2022: This article has been corrected to attribute a quote to Rachael Ray In Season.