Many More Vermonters Are Hungry in 2020 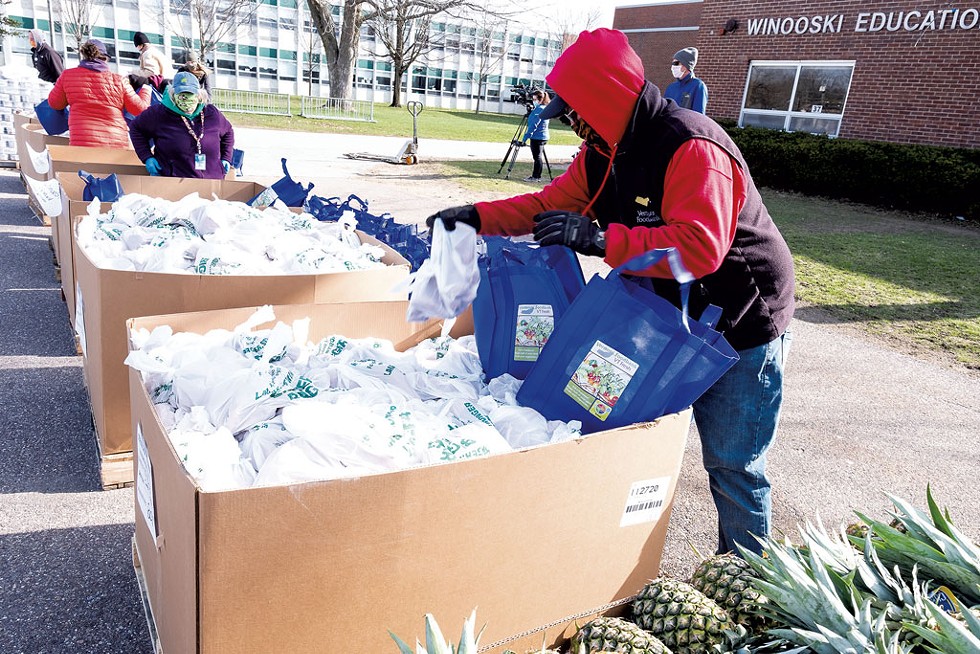 The rise in COVID-19 case numbers over the past few weeks isn't the only disturbing pandemic-related trend. Here's another: Record numbers of Vermonters are seeking help from food shelves, buying cheaper, less nutritious food or skipping meals to stretch their budgets.

Survey results released Monday from researchers at the University of Vermont detailed this rise in food insecurity. It found that 30 percent of respondents were food insecure between March and September of 2020. That's up from one in 10 pre-pandemic.

John Sayles, CEO of the Vermont Foodbank — the state's largest hunger-relief organization — confirms this trend. "We've seen a huge increase in people needing some kind of help to get by," he said.

The Foodbank distributes nutritious food through a vast network of 300 community partners, from food shelves to hospitals, senior centers to after-school programs, all across the state. It has also distributed part of its $4.7 million in federal CARES Act funding to many of them.

Sayles reported that these "frontline partners" are reporting increased demand for services, often from people who haven't sought help before. Many recipients have jobs that don't pay enough, he said. Others are unemployed or under-employed, have had their wages cut, are homebound and at greater risk because of the virus, or have been forced to quit their jobs to care for their kids.

Sayles warned that this spike in need has serious consequences for all Vermonters. People who aren't getting enough to eat aren't thinking about excelling at their job or on their schoolwork, he said. "They're thinking about how they're going to feed their family."

Sayles isn't the only one sounding the alarm. Jesse Bridges, CEO of the United Way of Northwest Vermont, echoes his concerns. All of Vermont's United Way organizations fund and support Vermont 2-1-1, the state's help line. Bridges said food-assistance-related requests are up 487 percent this year over last — and that 2020 number only captures calls through the end of October.

Both Sayles and Bridges pointed out that this isn't a scarcity issue — there's plenty of food on grocery store shelves. The problem is that people can't afford to buy it. The government program best designed to address this need — 3Squares VT, aka food stamps — provides funds to purchase groceries, and it's a huge help to families facing challenges with food access. But it hasn't been adequately expanded by Congress to address the increased need. As a result, said Sayles, "We're doing the most we can with the resources that are available."

On the Front Lines 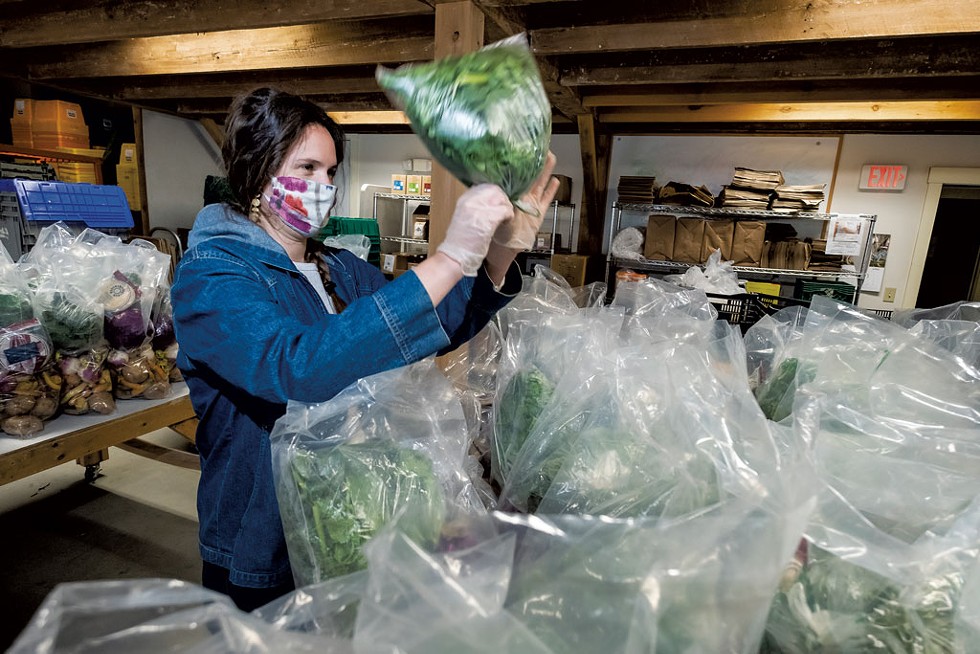 Here's what that looked like at the Foodbank's largest distribution site, Burlington's food access center Feeding Chittenden, a week before Thanksgiving: A line of masked people standing six feet apart wrapped around the building at 228 North Winooski Avenue.

During a normal year, these people would have walked inside to select grocery items from the shelves, but the doors were locked. They wore winter coats and hats to stay warm as they waited for a turn to talk with the staff inside via intercom.

On the other side of the wall, a busy team of masked staff and volunteers filled Chiquita banana boxes with perishables — a carton of eggs, a loaf of bread, a bag of onions, a bunch of bananas — then lined them up on a table for distribution.

"Can I have your birthday?" Bob Petterson asked a man over the intercom. "Have you ever been here before?"

Petterson recorded the man's info on his computer and lifted one of the boxes to the counter behind the window before pushing it through. Then Petterson turned around, grabbed a turkey and a bulging bag of canned goods, and passed those through, as well.

"All set!" he said. "Happy holidays!" The tall, thin volunteer wore a T-shirt showing a drawing of an atom and the words "Stay Positive."

That can be difficult to do right now. Grocery distribution coordinator Edi Abeneto said that, in the summer and fall, Feeding Chittendent had been distributing roughly 100 to 120 of these boxes a week. Now? "350," he said.

Feeding Chittenden director Rob Meehan pointed out that there's always a bit of a spike in need during November as it gets darker and colder. "It's just a hard time for people," he said. "And you add in children, and hunger, and now add in a pandemic. Wow." 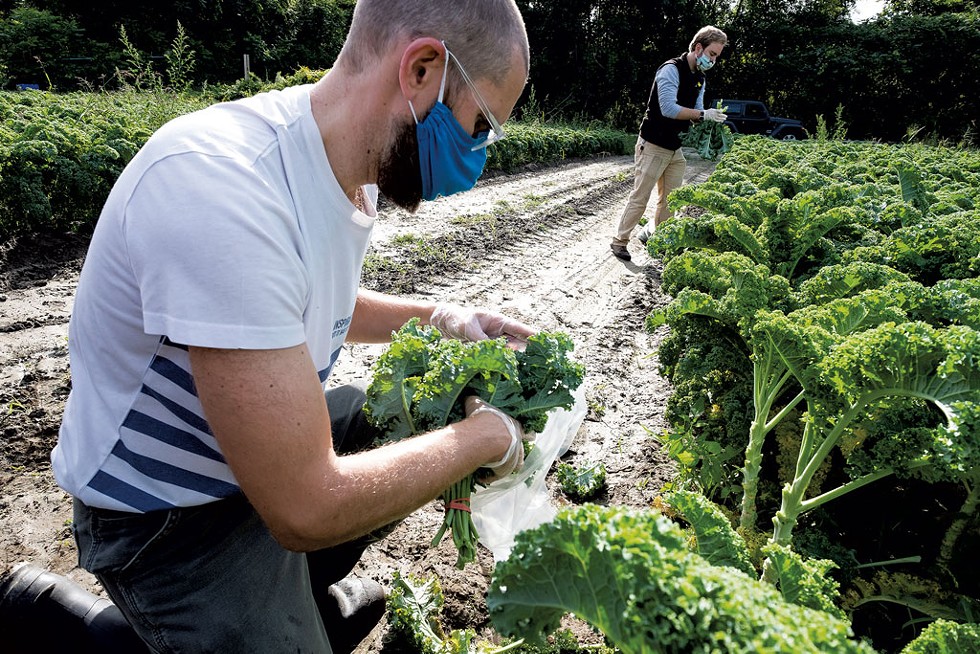 The situation could actually worsen on December 31, when crucial federal coronavirus relief programs are scheduled to end. Despite hopeful reports of coming vaccines, Sayles worries that it could be another year or two before his organization returns to pre-pandemic demand. "I don't see this slowing down," Sayles said.

And, as with past downturns, he added, "the people who are most vulnerable are the first to lose their jobs and the last ones to get them back."

He urged Vermonters who want to help to contribute to the Foodbank or to its community partners. Bridges added that flexible philanthropic dollars are so important to meet the evolving need. In other words, the fewer strings attached to the funding, the better.

It seems that Vermonters are hearing the call. The UVM survey also found that 40 percent of respondents had delivered food to someone in their community during the pandemic.

Sayles noted that his organization has already received a "tremendous" number of contributions since March. "The support has been overwhelming and humbling," Sayles said.

Hunger in Vermont By the Numbers

That's the total weight of food distributed by the Vermont Foodbank between March and September 2020 — more than double the 6.7 million pounds distributed during the same period last year.

The increase in the number of food-assistance calls to Vermont 2-1-1 from 2019 through October 2020.

The increase in the use of food pantries in Vermont between March and June 2020.

That's roughly the number of Vermonters who have experienced food insecurity since March — nearly triple 2018 levels.

That's the number of respondents to a UVM survey who are eating fewer servings of fruits and vegetables, suggesting a decrease in diet quality.

Here's How to Help

Donate to the organizations listed in this article:

Find out more about accessing assistance at vtfoodbank.org or hungerfreevt.org, or call 2-1-1.