A Vermont boomerang builder is ahead of the curve 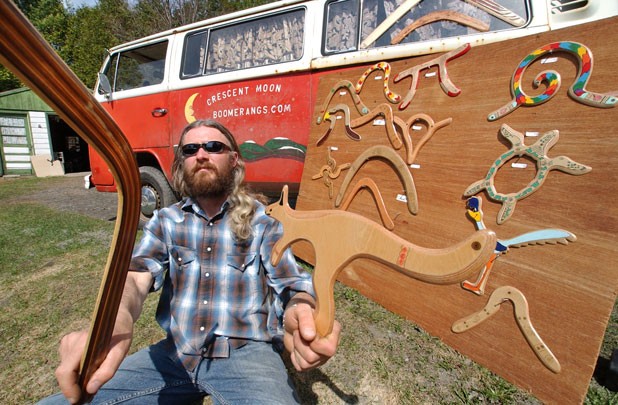 Question: What do you call a boomerang that doesn't come back? Answer: A stick.

Brookfield's Jeremy Levine, 31, has heard that chestnut more than once. It happens when you're in the boomerang business, and Levine owns Crescent Moon Boomerangs.

Those mysterious gadgets are not exactly what come to mind when you think "Vermont products." But it's a different story elsewhere, Levine says. The boomerang community is big and growing out west: There's even a national league, the United States Boomerang Association, whose website (http://www.usba.org) calls boomerang throwing "the ancient sport of the future."

Laugh if you will. But what goes around comes around, and here in the Green Mountain State, the combination of open spaces and open minds could just lead to a boomerang boom this summer.

It helps that Levine's boomerangs actually return when thrown. He proves it time and time again in a large meadow behind L.B.J.'s store in Worcester. The acreage is of the essence, because, as Levine cautions his observers, to throw a boomerang, you need a space at least as big as a baseball field one free of trees, buildings and other people.

For a demonstration on a recent afternoon, he's brought a duffle bag full of his designs two dozen or so boomerangs of different shapes and sizes. The traditional curved "L" shape shows up, of course, though Levine's are adorned with a painted turkey vulture. Then it gets really interesting. The bag holds boomerangs shaped like a turtle, a cat, the cartoon Roadrunner, the pi symbol, squiggly abstract shapes, and a kangaroo. (That last one harks back to the well-known use of the boomerang by Australian aborigines.)

If you think cats can't fly, think again. Levine squints into the sun, checking the wind's direction. Holding the cat by its "tail" and pinching the tip with thumb and index finger, he fires his kitty boomerang into the slight breeze, as if he's throwing an axe or a football. With a faint helicopter-like sound, the device shoots about a hundred feet or so. Then, astonishingly, it makes a loop and heads back to Levine. He catches it by clapping his two hands together, much as one might stop an approaching Frisbee. In fact, Levine notes, Frisbee players make good boomerang customers.

Wearing sunglasses helps him spot the returning boomerang, whose average flight time is 10 to 15 seconds. They also offer protection: Levine has been smacked on the bridge of his nose by a returning 'rang.

Next whoosh! off goes the turtle. Then the pi. No one would expect these odd shapes to be aerodynamic, let alone return like homing pigeons. Is there some magic at work here?

It might be fun to think so. But, back at home again, Levine explains how boomerangs work. "You are carving an airfoil," he explains, referring to the shape that gives airplane wings their lift. A close look at the edge of one of his Crescent Moon Boomerangs shows that it does, in fact, resemble the curved, teardrop form of an airplane wing. But how a cat shape, with its many winged surfaces, can stay airborne and then return remains a mystery.

Levine says the object's trajectory has to do with how its various edges are beveled and bent. "It is a combination of inertia from the thrower, rotational spin from the axis of the center of gravity between the midpoints of wings, and uneven lift that occurs with each subsequent turn of the 'rang when thrown vertically," he says.

It also has to do with the wind and the thrower's skill.

"The wind provides the 'rang more guidance back in the direction of the thrower, though too much wind will become a hindrance, as the 'rang will become more unstable during its flight boomerang turbulence, if you will," Levine explains. A successful return also depends on a skillful throw, which requires patience, practice and ability. Launched haphazardly, a boomerang may take an immediate nosedive or head into the woods.

And there's plain old know-how involved, as in Levine's choice of wood which has a great deal to do with the boomerang's success aloft, he says. He generally uses 10-ply, ultra-thin birch milled in Finland, though one of his favorite boomerangs is made from the bent branch of an apple tree.

The building process begins when Levine places a pattern on a 61-inch-square panel and cuts out the rough shape with a jigsaw. Then he works the edges with a rasp. Shaped properly, those edges are what make pi fly. Each of Levine's boomerangs also gets a steam tuning this gives the structure a slight twist, or what Levine calls "dihedral lift." Next he paints or wood-burns a design (his signature goes on the underside) and coats the 'rang with two coats of polyurethane for protection. Though thin, they are durable and long-lasting.

"Boomerangs were found in King Tut's tomb," Levine remarks, dispelling the notion that the devices were invented solely in Australia. "The oldest was found in what is now Poland. It was carbon-dated as being 20,000 years old."

Levine pauses as his eyes scan his collection of boomerangs, tools and books on the subject. "Kind of geeky," he says, laughing.

A friendly guy and erstwhile drummer for The Eames Brothers Band and Old Jawbone, Levine works as a seasonal laborer currently seven days a week for Third Branch Farm in Roxbury when he's not making boomerangs.

He says he first became interested in boomerangs when he was about 12. His first one was a cheap plastic model, red with yellow stripes. In high school he dabbled in Frisbees.

But a few years ago, inspired by the birth of his son, Levine started reading about boomerangs and found his interest piqued anew. "After my son was born, I started to think about what I really wanted to do with my life and if I could take a hobby or passionate interest and make it into something where I earned some money," he says.

He also discovered a network of 'rang enthusiasts on the Web, eager to discuss the sport: "There's a whole community of boomerang folks." Now Levine links to them on his website, www.crescentmoonboomerangs.com. In Vermont, however, he's only come across a handful of people who throw regularly. "I tried to get some interest in central Vermont last year," Levine says, "but it seems like an archaic, weird sport nobody knows a lot about."

Archaic or not, Levine managed to sell a total of 110 boomerangs last year for $20 to $50 each nationally through his website and locally at area stores. His handcrafted boomerangs are available at Outdoor Gear Exchange in Burlington, the Stowe Street Emporium in Waterbury, Clearwater Sports in Waitsfield, the Artisans Hand in Montpelier and L.A.C.E. in Barre.

Levine admits his marketing campaign to date has been less than aggressive: All he does to advertise Crescent Moon Boomerangs is drive a red 1976 Volkswagen bus with the company logo painted on the side. When people do learn about his devices, reaction varies from bafflement to curiosity. "People have asked me if that bus, with its wording on the side, is from the '60s," Levine says with a laugh. "If I start to get into it [describing his boomerangs], I find people quickly get bored. As soon as I say 'gyroscopic procession' . . ."

Those who are intrigued, though, head to a field and let their freak 'rang fly.