It's no secret Vermont dairy farms are major contributors to the phosphorus runoff that is polluting Lake Champlain. In particular, the way they dispose of copious amounts of cow manure has come under increasing scrutiny.

That's why the State of Vermont gave Allan Brisson, the 61-year-old proprietor of Allandra Farm, a $65,000 grant to construct a manure pit and make other upgrades on his land in Ferrisburgh. Sitting in the air-conditioned cab of his 450-horsepower tractor, Brisson explained that the state bans spreading manure on fields from mid-December to April because wet and frozen soils result in more runoff. Farms need to store their cow shit somewhere in the meantime. Increasingly, farmers are putting manure in "satellite pits" located close to the fields where it will ultimately end up. This makes it easier to spread when weather conditions are favorable and reduces manure-truck traffic.

But in Ferrisburgh, Brisson's "poo pit," as it's been dubbed, has incited a civil war between conflicting agricultural interests. Residents of the bucolic Addison County town are taking sides in mudslinging online comments and in old-fashioned altercations at selectboard meetings.

Striding through rows of zinnias and marigolds, the owner of Flower Power farm rattles off her concerns about the large crater in the cornfield across the road from her operation. The 160-foot-diameter pit is currently empty, but eventually it will hold up to 2 million gallons of liquid manure. Anne Flack-Matthews, 54, said she worries that ammonia-like fumes will permeate her flowers and the value of her property will decline. She is also concerned that during spring floods, the pit could overflow.

Fourteen years ago, Flack-Matthews left her family-owned garden center in Pennsylvania and bought a house and an old dairy barn on Ferrisburgh's Middlebrook Road. Succulents grow in pots, there are small jars of mint for sale and hand-painted wooden signs direct visitors around the 22-acre hillside farm. In addition to flowers, she has planted apple, pear, plum and peach trees, grows vegetables and hops, raises chickens, and cares for a coterie of rescue animals, including several horses, llamas and donkeys. 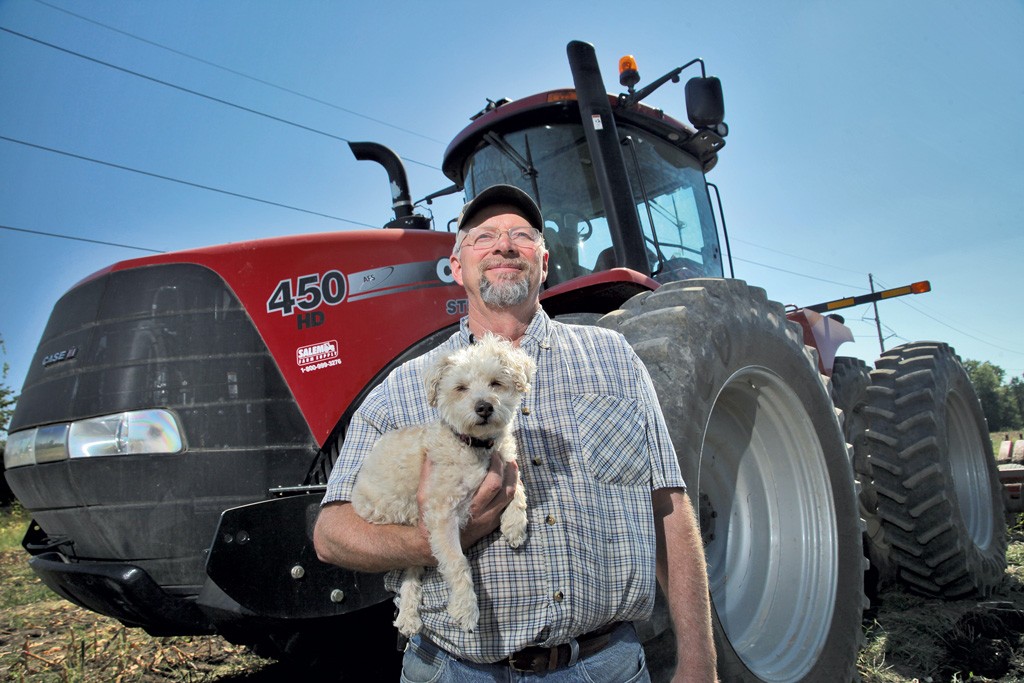 Wearing a sleeveless dress and Birkenstocks, Flack-Matthews said she's trying to make her farm a place to learn about permaculture as well as a destination for flower-seeking brides. She worries that a large vat of manure across the road will keep people away. Even before the pit appeared, Flack-Matthews said, she's had customers return flowers on several occasions, complaining that they smelled of manure from Brisson's fields.

Brisson has been dairy farming for 40 years, accumulating 11 farms as contemporaries have thrown in the towel. Allandra Farm now consists of 2,000 acres of corn and hay fields located in four towns, and 1,900 cows, which produce roughly 10 million gallons of manure a year. The sprawling ag operation has a large-farm permit, which requires Brisson to have a "nutrient management plan" — "nutrients" is the polite term for cow poop — and means that he must get state approval to construct pits or make other changes to his plan.

Laura DiPietro, deputy director of the Agricultural Resource Management Division, confirmed that Brisson called the agency as required, and it dispatched an engineer to help him determine the Ferrisburgh pit's placement. DiPietro emphasized the rigor of the approval process: The soil underwent lab tests, and the agency verified the site wasn't in a floodplain and was at least 100 feet away from adjacent properties.

Brisson, wearing a Chevy baseball cap and jeans with holes around both knees, considers himself an early adopter when it comes to responsible spreading. He has embraced dragline-hose equipment, which transports manure from pits to spreading equipment in the fields, rather than using a heavy manure tanker that compacts the soil as it drives. When possible, he said, he also uses injectors, which shoot manure below the soil's surface instead of "top dressing" the field.

Both techniques increase absorption of nutrients. That is good for both Lake Champlain — because it reduces phosphorous runoff — and for his bottom line, Brisson pointed out. "It's a valuable resource," he said. "If you smell manure, I'm losing money in fertilizer." The pit, he added, will hardly smell: "If you're not disturbing it, it just kind of crusts over."

In an email, state Agriculture Secretary Chuck Ross assured nearby property owners that Brisson had followed all state and federal requirements and was "in good standing" with the agency.

"I went through the whole process!" Brisson exclaimed.

But that doesn't mean neighbors are comfortable with having what Flack-Matthews calls a "mega-lagoon" of manure nearby. Tim Mathewson, who lives next to Flack-Matthews and can see the pit from his porch, said he is also worried about its impact on property values and the lake. He said he's seen that location flood every year, and he suggested that the Federal Emergency Management Agency's floodplain map, charted in 1986, was outdated. "I don't have an environmental degree," he said. "I just know the environment because I live in it every day."

Both the Otter and Lewis creeks run through the fertile land around Ferrisburgh, which hosts nearly 30 working farms and claims 21 miles of Lake Champlain shoreline. The connection between agriculture and aquaculture is as clear as it is in the Franklin County towns along the phosphorous-rich Missisquoi River.

But Brisson and the state maintain that the pit, which is surrounded by a 7-foot-tall dirt berm, is "absolutely not in the floodplain." Brisson acknowledged that each spring roughly a quarter the field floods, but he insisted that the spot where the pit is located — 2,500 feet from Little Otter Creek, he estimates — never does.

Flack-Matthews has gone to great lengths to stop the pit. She's contacted Congressman Peter Welch (D-Vt.), a Penn State manure specialist and even Martha Stewart, who she considers an inspiration. She's hired lawyer James Dumont to review her legal options. She's painted "Stop the Poo Pit" signs and flagged down cars to convert drivers to her cause. Supporters started a Facebook page that has roughly 460 members.

The dispute between neighbors has mushroomed into what some have framed as a flatlander versus farmer melee. Both sides have accused the other of harassment. On a rival Facebook page, called "Keep the Poo Pit," which has approximately 1,800 members, Flack-Matthews — who has criticized "big ag" practices — has been disparaged as an out-of-stater with no appreciation for Vermont's dairy industry. A friend of hers abandoned plans to make a documentary film about the dispute after receiving a deluge of phone calls and Facebook messages, including one from someone who said he hoped his "hippie pile of shit family" would die.

Brisson distanced himself from the effort, saying that he doesn't know many of the people who've come to his defense. He did say that it's been "extremely gratifying" to see young people who are enthusiastic about farming.

Matt Vogel's property also abuts the pit, although his house is roughly half a mile away. Initially he reached out to local officials expressing strong opposition to it. But after learning more about manure storage and talking with Brisson on the phone, he decided not to fight it. "Allan Brisson did everything by the book," he said.

Vogel thinks much of the drama could have been avoided if neighbors had gotten a heads-up before the excavators started digging. He pointed out that if someone wanted to build a house nearby, zoning regulations require that the town notify neighbors in advance, usually through a letter in the mail. But a massive pool of manure can surface next door with no notice.

Because of the size of Brisson's pit, he needed a stormwater permit from the Agency of Natural Resources, which meant town officials did post his application at the town offices and in the Addison County Independent. But few people make a habit of reading municipal notices. As the state continues to promote satellite pits, Vogel expects other farmers will encounter resistance. He thinks the legislature should require better notification.

Mathewson echoed Vogel's proposal. Asked what kind of notification he'd want, he said, "I think a letter to the door. And in a perfect world, I think a knock on the door."

Brisson, who plans to build another pit in Monkton, doesn't support more citizen involvement. Brisson said his farming practices have never upset neighbors before, and he doesn't think he'll run into similar problems in the future. Still, he argued, "I shouldn't have to fight this battle."

He noted that Vermont passed its "right to farm" law to protect farmers like him from lawsuits stemming from neighbor disputes.

Are the officials in charge open to the idea of alerting neighbors to a proposed pit? Ag officials, who said they've haven't previously dealt with objections to manure pits, suggested it would be up to the town to change notification procedures. The Ferrisburgh selectboard didn't respond to an inquiry, but they've repeatedly told the pit opponents where to take their complaints — to the state.

Correction, 9/24/15: A previous version of this story misstated how much of the field Brisson said floods in springtime.