'Mank' Is a Glorious Pastiche With an Empty Center 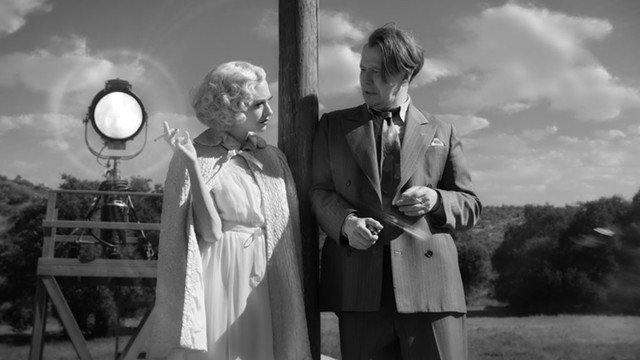 Our streaming entertainment options are overwhelming — and not always easy to sort through. This week, I watched Mank, director David Fincher's tribute to old Hollywood and to his late father, Jack Fincher, who wrote the screenplay. The film was released on Netflix after a brief theatrical run and is likely to be an awards contender.

Once, screenwriter Herman J. Mankiewicz (Gary Oldman) was the toast of Hollywood, with a renowned wit that made him a favorite dinner guest of newspaper tycoon William Randolph Hearst. But by 1940, years of boozing and gambling have caught up with "Mank."

The washed-up scribe heads into the Mojave Desert to convalesce from a broken leg, dry out and write a screenplay commissioned by young wunderkind Orson Welles. The subject? A thinly disguised Hearst, portrayed in unflattering terms.

As he dictates a draft of what will eventually become Citizen Kane to his secretary (Lily Collins), Mank wallows in memories of his glory days; of his friendship with Hearst's mistress, Marion Davies (Amanda Seyfried); and of how it all went wrong.

Every aspect of Mank is a love letter to vintage Hollywood and old-school moviegoing. The film is shot in luminous black and white, with "cigarette marks" to signal the reel changes to an imaginary projectionist. The compositions are dramatic. The soundtrack echoes and pops.

People in Mank don't just talk; they fire off strings of stylized banter like people in the screwball comedies that Mank used to write. For every brilliant one-liner ("If I ever go to the electric chair, I'd like him to be sitting in my lap," Mank says of studio head Louis B. Mayer), there's at least one tortured mixed metaphor. When Oldman and Seyfried are quipping in tandem, it's hard not to be reminded of the parody of His Girl Friday on "BoJack Horseman."

All of this makes for an extremely talky movie that was tailor-made for film buffs, full of gossip and inside jokes — and, for the most part, it's entertaining. But the elder Fincher's screenplay runs into trouble when it attempts to turn Mankiewicz into a sympathetic — nay, heroic — figure who stood up against fascism and the Man, here represented by Hearst, Mayer and the California Republican Party.

That effort involves delving into the minutiae of a 1934 gubernatorial campaign and placing a great deal of weight on Mank's supposed sympathy for Democrat Upton Sinclair. There's also a clunky "save the cat" moment in which a minor character informs us that Mank saved an entire village from the Nazis (an exaggeration, though he did sponsor many refugees).

There's nothing wrong with wanting to elevate the underdog, a man whose contribution to Citizen Kane was dismissed for decades in favor of Welles'. But Mank pivots too quickly from sarcasm to sentimentality, telling us to like Mank because his heart is in the right place. We're expected to tut-tut at his bad behavior while smiling fondly at him, much like his long-suffering wife (Tuppence Middleton). Though she bears the sobriquet "poor Sara" in their circle of friends, she quips right back at him and never speaks a word of reproach.

Overall, the film could have used a few breaks from the relentless quipping. Even the heroes of those old movies paused occasionally to look at themselves in a metaphorical mirror, and I'm not sure they'd have let themselves off as easily for their indiscretions as Mank lets Mank off.

My guess is that, if you were a fan of the Aaron Sorkin-scripted combination of wordy snark and moralizing in Fincher's The Social Network, you'll be a fan of Mank, as well. For this viewer, the elaborate pastiche is a lot more successful as an aesthetic object than as a story.

Citizen Kane (1941; HBO Max, rentable): Whether you like Mank or not, it should inspire you to revisit Welles' classic before it leaves HBO Max on December 31.

The original print version of this article was headlined "Mank"