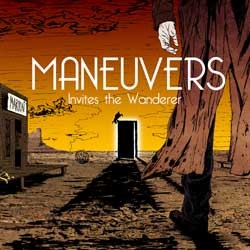 One of the distinct little pleasures of being the music critic for the state’s preeminent arts rag is that I get a front-row seat to the evolution of not only Vermont’s numerous scenes, but also individual local bands and artists. Truth be told, it’s a pretty sweet deal. The last few years have seen a seismic shift toward loud rock music, especially in Burlington, as a slew of up-and-comers (In Memory of Pluto, The Vacant Lots, et al.) have all made strong cases to be counted among the area’s best and brightest.

Where Sirens offered a glimpse of a young band struggling under the weight of its own ambition, Wanderer suggests a rapidly maturing outfit that’s finally in command of its influences. To be sure, Maneuvers still trade in a sort of cacophonous flurry of sound, which owes as much to guitar-rock classics like Led Zeppelin as it does to the more retro-modern tastes of the current indie-rock set. But this time around, the trio imparts its own stamp on the proceedings, delivering smartly conceived tunes with ragged bravado.

Guitarist Paul Comengo is a revelation. Heading a maelstrom of noise courtesy of bassist Jeff Foran and drummer Urian Hackney (Rough Francis), his furious, cleverly disjointed lines define the record. Of the three, his is the most complete, and perhaps most important, evolution.

Foran does most of the heavy lifting, vocally speaking. And while he may not be serving up sweetly crooned lullabies anytime soon, his screeching exhortations are a dynamic complement to the sonic discord that surrounds him. He also handles the lion’s share of songwriting duties, and proves a sneakily talented wordsmith. Foran is something like a poor man’s Isaac Brock, which is hardly a bad thing.

If Invites the Wanderer is an accurate barometer, then a gathering storm of gritty rock tumult in Vermont looms on the horizon. In any event, Maneuvers should be on your radar.

The band celebrates its new album with a release party at the Monkey House in Winooski this Friday, August 14. Feels Like July and the Ghost Sonata open.