Mandatory Composting: Coming Soon to a Trash Can Near You | Environment | Seven Days | Vermont's Independent Voice

Mandatory Composting: Coming Soon to a Trash Can Near You 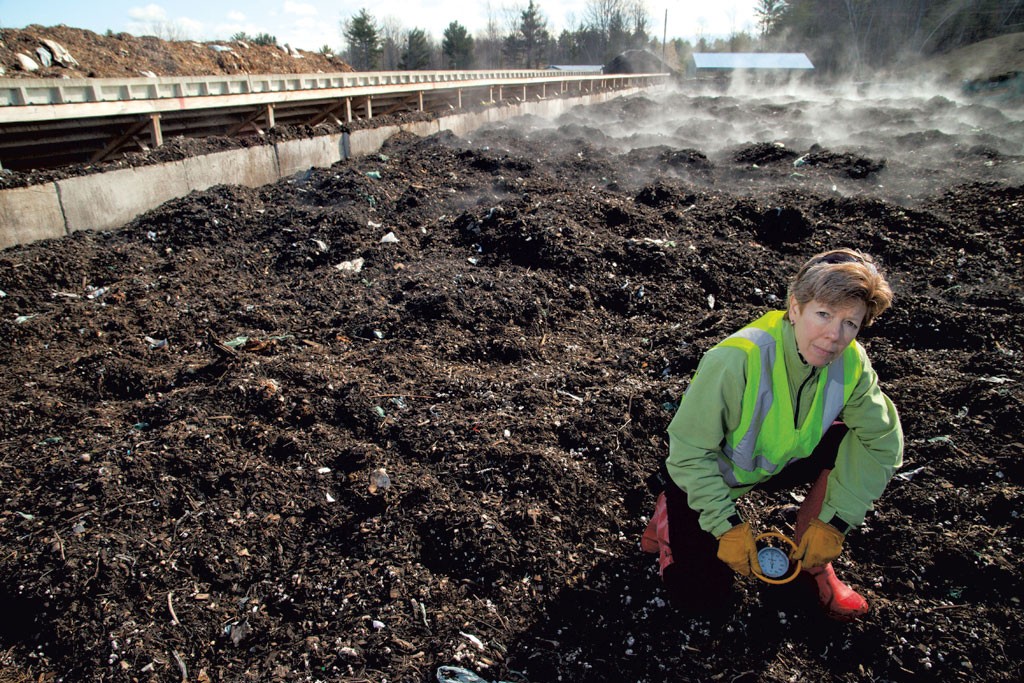 Hold on to your apple cores, Vermonters: Starting this summer, the state is making big changes in the way it manages food waste.

Two years ago, lawmakers passed Act 148, also called the Universal Recycling law, and Vermont became the first state to enact an all-out ban on food scraps in landfills. The new rules, which will be introduced over the next six years, constitute the biggest policy change in statewide trash hauling over the last three decades.

By 2020, all Vermonters will be required to separate their organic food waste from trash and recyclables.

Six years might seem like a long way off. But for the biggest producers of food waste — those generating at least two tons a week, and located within 20 miles of a composting facility willing to take their scraps — the first phase of Act 148 kicks in this summer. In January, the state contacted roughly 770 commercial customers that seemed to fit in that category, including Fletcher Allen Health Care, Wake Robin and local colleges. They'll have to be more diligent about disposal as of July 1.

"Half of the customers we talked to said, 'OK, it's the law. It's the right thing to do. Tell me how we can make this work,'" said Joe Sinagra, the sustainability director at Myers Container Service, which picks up trash, recycling and compostable materials in northern Vermont. He's been reaching out to Myers customers on the state's list, as well as other potential customers, to offer assistance with the new state regs. "Some are saying, 'Go to hell.'"

In 2015 the food-scrap rule expands to include customers who produce half as much food waste as the big institutions: 52 tons a year, a category which includes many larger-volume restaurants. Next year, also as a part of Act 148, a ban on recyclables in landfills takes effect — the first statewide mandate for recycling.

Most Vermonters are accustomed to recycling. It's the new rules for food waste that have many trash haulers, composters and businesses asking themselves, with varying degrees of optimism: Will Vermont be ready?

"The question within the compost community, since Act 148 passed, was, how would we ramp up to have the infrastructure needed to accomplish the stated goals?" said Karl Hammer, the president of Vermont Compost Company in Montpelier.

Hammer said that his own company can handle more organic material — he has another permitted site he's never used — as long as there's an effective way to eliminate contaminants, such as plastics, from the compost stream. But Hammer doesn't believe there are enough facilities in Vermont to accommodate all the food waste the new regs are likely to generate.

Statewide, he said, "We just plum don't have the capacity."

Similarly, Hammer said he's heard grumbling from smaller trash haulers who are trying to figure out how they can carry compost — which has to be in a separate truck, or a separate section of the truck, from the garbage — without adding significant expense, equipment or personnel.

"You have over 100 trash haulers in Vermont," said Sinagra, "and there are only a handful who are really capable of doing compost right now."

Some see that as an opportunity. University of Vermont senior CJ Kimbell started picking up compost from a handful of residences last October. He used a friend's Jeep to ferry food scraps to Chittenden Solid Waste District's composting facility in Williston, and has since upgraded to a pickup truck. Now a certified CSWD hauler, Kimbell relies solely on word-of-mouth referrals; he currently has 30 residential customers who each pay $10 a month for weekly pickup.

He's already thinking about ways to grow and diversify the business. Long-term, he's interested in building anaerobic digesters, which can turn food waste into energy. In the short term, he's considering adding a CSA delivery option to the same people from whom he and his partner pick up compost — in other words, providing food, then picking up the food scraps later.

With its phased-in deadlines, Act 148 is designed to let existing trash-hauling businesses adjust and make necessary investments in infrastructure — while encouraging start-ups like Kimbell's to fill in the gaps. Josh Kelly, an environmental analyst with the state's solid waste management program, suggests state grants to would-be composters, who need technical assistance or expertise to get their operations up and running.

He said the new law comes at just the right time. "It seemed timely to really act in a big way," Kelly said. "This is the future of solid waste."

The "future" of solid waste is already here — at least in some spots around the country. Seattle, San Francisco and Portland all have bans on food scraps in landfills; New York City is moving in that direction, too. Other states have also enacted partial bans on food waste, though none has been as aggressive as Vermont.

Numerous Vermont businesses and restaurants already separate food waste from their trash, some of which ends up feeding local livestock. University of Vermont is one example: It has been diverting food waste for decades, and in recent years expanded food collection from the dining halls to its offices and other buildings. Every week, UVM keeps an average 9.5 tons of food scraps out of Vermont's sole landfill.

The university's experience is instructive for other large organizations now facing the Act 148 requirements.

"Lately we've been getting a lot of phone calls," said Erica Spiegel, UVM's solid waste manager. Who is calling on UVM for guidance? Among others, the Vermont National Guard. "They're saying, 'Hey, we have to do this thing. How are you doing it?'"

In most venues, organic material still makes up a large portion of what goes into the average trash can. When the CSWD conducted an analysis of the area's "municipal solid waste" — that is, garbage from residences and businesses — it found that only 40 percent of it belonged in a landfill. More than a quarter of what residents and businesses throw away could be recycled, and nearly a third — 32 percent — is biodegradable organic material that could be composted. That's a lot of orange peels and onion skins.

First, the state's only operating landfill is located in Coventry, in the heart of the Northeast Kingdom, 55 miles from downtown Burlington; instead of taking up precious space in a rapidly filling dump, Vermont's organic material could be diverted from the waste stream and composted much closer to home, whether you live in the Queen City, Montpelier, Rutland — pretty much anywhere except Newport.

"We're trucking trash to Coventry that doesn't need to go there," said Michele Morris, the business outreach coordinator at CSWD — specifically, 89,700 tons in fiscal year 2013, of which more than 28,000 tons could have been diverted to a compost facility, such as CSWD's in Williston.

When food scraps do end up in the landfill, they decompose slower than they do in a compost pile. They also produce more methane — a greenhouse-gas component — as they break down.

Plus, it's a wasted opportunity. As Joe Fusco, a vice president at Casella Waste Systems, puts it: "Is there something in there that has a higher and better use than just sitting in a landfill?" Casella is using a methane digester to turn food waste into energy as part of an experiment in Massachusetts.

But the simpler use is the most obvious one: as a soil amendment.

To that end, three years ago, CSWD started operating Green Mountain Compost in Williston, where food scraps are transformed into dark, rich compost over the course of seven to 12 months.

The facility suffered a nearly $1 million setback the following year, when its product was contaminated with herbicide and withered vegetable gardens all over Chittenden County. Last week, operations at the compost facility were back to normal; more careful collection policies, coupled with stringent testing, are designed to keep the problematic herbicides at bay. There was an earthy smell in the air at the facility, but no unpleasant odor.

Commercial haulers pay $40 a ton to dispose of food scraps at the site, about a third of what they fork over for trash; it's free for residential customers to dispose of organic waste at the site. There's also no charge for leaf and yard debris, which are important sources of carbon in the composting process.

But in addition to the heaps of compost there are piles of contaminants — Gatorade bottles, plastic wrappers, utensils. Even the stickers on produce are a problem. It takes a multipart sifting process to separate the compostable stuff from the trash.

Teaching Vermonters how to do that triage themselves will likely be at least as challenging as building the infrastructure to deal with the result. Composting isn't difficult, said Steve Polewacyk, the owner at Vermont Pub & Brewery — but it does require thinking differently about an act as simple as tossing something in the trash.

Polewacyk said his restaurant started separating at least some food scraps around four years ago. But when CSWD approached the restaurant about ramping up composting earlier this year, Polewacyk and his employees were floored to realize just how much more they could keep out of the landfill.

In addition to food scraps generated by the prep cooks every morning, servers and cooks at the Brewery compost napkins, beverage coasters, toothpicks — "I can't even think of all the stuff," said Polewacyk, rattling down the list.

Ramping up composting efforts meant working with suppliers to ensure that all of those napkins and coasters were biodegradable. Some of those materials cost more, but the restaurant is saving money on its trash bill. "It's all a wash," said Polewacyk. "We're at break even, and ... we're doing the right thing."

And they're doing it before they have to; given the amount of waste VPB generates each year — an estimated 50 tons — it would have until 2016 to start diverting all of the restaurant's food waste.

"I don't mean to be melodramatic about it," said Polewacyk, "but we all have to be doing this kind of stuff."