Sarah and Eric Perry stood on the sidelines of the soccer field, watching their team practice. As balls flew through the air and players' voices rang out in a cacophony of code words, the couple was intent on every detail. For them, calling VT Fusion "our team" wasn't a sports-fan expression — it was for real.

Together, as volunteers, the Perrys lead Vermont Fusion Soccer club in Manchester. Sarah, a campus supervisor at Burr and Burton Academy, is the club's president; Eric, a carpenter, is vice president and director of operations. For more than 25 years, the nonprofit club has trained youth players in southern Vermont and eastern New York and helped them compete locally.

On the field the morning a reporter visited was the team that the club sent this year, for the first time, to play in the Women's Premier Soccer League. The WPSL is the oldest women's soccer league in the U.S. and the largest in the world. The presence of a WPSL team in the state through Vermont Fusion Soccer represents an opportunity for high-level competition that was previously unavailable to local women players.

"There are so many chances for boys," Eric explained. "But for girls, at a certain point, it's much tougher." Indeed, the WPSL team closest to Vermont is FC Buffalo in western New York.

"We know we have something special here." John O'Keefe tweet this

Playing in the WPSL is essential for those looking to stay sharp between collegiate seasons or make the jump to the professional leagues. Current U.S. Women's National Team stars Alex Morgan and Megan Rapinoe played on WPSL teams, as did former stars, including Abby Wambach and Julie Foudy.

"There were so many reasons to try this," Sarah said of launching the club's WPSL team as she and Eric walked the sideline. "It's good for the community; it's good for the town, yes. But my main reason for getting into this was always personal. I see these girls in our community that can absolutely play at this high of a level. But where's the opportunity?"

The Perrys formed strong alliances with town officials and community members to create the VT Fusion women's team. It played eight games during the WPSL's season, from May 22 through July 10, and had unmitigated success. VT Fusion won its WPSL division title — and won over the town.

The club normally would have held live tryouts, where VT Fusion coaches could have observed the players. During the pandemic, however, the team drew from local players who had come up through the club's youth ranks or played regionally at the college level. Candidates from other states sent videos displaying their skills.

The Perrys chose 17 Vermonters for the 28-woman team, some of whom play for the University of Vermont and Saint Michael's College. Those from out of state included a player from Skidmore College in Saratoga Springs, N.Y., and a Hawaiian woman who plays with the perennial Division III powerhouse Claremont-Mudd-Scripps team in California.

Even during a lighthearted practice session at the end of its season, the team's skill was undeniable. Passes shot through the air were taken down with one deft touch of the foot, and tackles flew in from all angles. For a squad put together fewer than six months ago, the chemistry was palpable.

"We got really lucky with this group," said Ella Bankert after practice had ended. She's a senior at UVM and midfielder with VT Fusion. "Everyone gets along so well, considering this is the first season."

"In Vermont, there's never been a team like this," added Tess Belnap, a fullback from Arlington who plays for Williams College. "You couldn't play at this level before. And seeing the [young fans] at the games is amazing. They seem to look up to us, which is really weird, but also really cool." 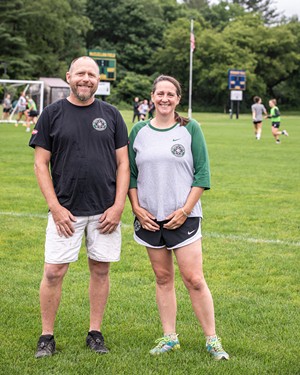 "I have two daughters: a sophomore and a senior in high school," said O'Keefe by phone. "And having girls like this, players they can see in person, is just so huge."

O'Keefe, a self-described "soccer fanatic," believed that a Manchester-based WPSL team would generate multiple opportunities for the city. He won grants and did additional fundraising to upgrade Applejack Stadium, VT Fusion's home, and he oversaw the work and did some of it himself. Playing at a top-level facility, VT Fusion drew large home crowds as the townspeople fell in love with their new team.

"We had one game where we drew 850 fans," O'Keefe marveled. "But when we play other teams, they're only drawing 20, 25 people sometimes. So we know we have something special here."

He cited a specific match against Westchester United when the team and its fans really bonded. VT Fusion were down 2-0 but scored late, sparking a buzz in the stands. When the home team scored the equalizing goal in added time, he said, the sellout crowd erupted.

"People were screaming and pounding the bleachers like we'd won the World Cup," O'Keefe recalled. "And we'd only tied. That's when I really knew."

Everyone involved with VT Fusion is aware of the uphill battle women face in the sport. The U.S. Women's National Team, for example, regularly outperforms the men's team but is paid far less, prompting its current lawsuit against the U.S. Soccer Federation. The national women's team has won multiple World Cups and Olympic gold medals, but the men's team has yet to do either. The latter didn't even qualify for the 2020 World Cup or the 2020 Olympics. In addition, the women's team generated nearly $1 million more revenue than the men's team from fiscal year 2016 to 2018, according to a 2019 story in the Washington Post.

"If we want change, it starts at this level," Sarah said. "Whether they're a 25-year-old or a 6-year-old just learning how to touch the ball, the girls deserve this. They deserve to be seen, and we can give them that."

According to Eric, change is already evident.

"We see young girls at the game, watching our players," Eric said. "You can feel the effect in real time. There's already a connection with the community."

The couple anticipates that their stewardship of the team and club will end soon. Their youngest child is still playing for the club's youth team, but once he moves on, they plan to step down.

"Sarah and I started this, and we want to see it through. We want this team to continue," Eric said as he glanced at the stadium. Its wooden stands and lush, green surroundings looked almost ethereal in the morning light.

"When our son is grown and out of the club, I'm sure we'll still help out whenever they need us. But really, we can't wait to just open a few beers, sit back and enjoy watching our team play — as fans."

Want to learn more about the present and future of women's soccer in Vermont? The City of Manchester and Vermont Fusion Soccer club will host a free conference on Saturday, September 4, at 2:30 p.m., titled "Mia to Meg: and Beyond: A discussion about the recent history of US Women's soccer, the current challenges and the possibilities."

Held at the Park House at the Dana L. Thompson Memorial Park, the conference will address many topics, said Manchester Town Manager John O'Keefe. On the list: Title IX and equal pay for women players, the need for a paid women's minor league, establishing more WPSL teams in New England, moving more women into coaching, and the popularity of women's soccer in the U.S. and how to increase it.

The women's soccer teams of Middlebury College and Williams College will compete at noon on the day of the conference at Applejack Stadium.

Admission to the game and conference are free, but donations to the VT Fusion team of the Women's Professional Soccer League will be accepted.