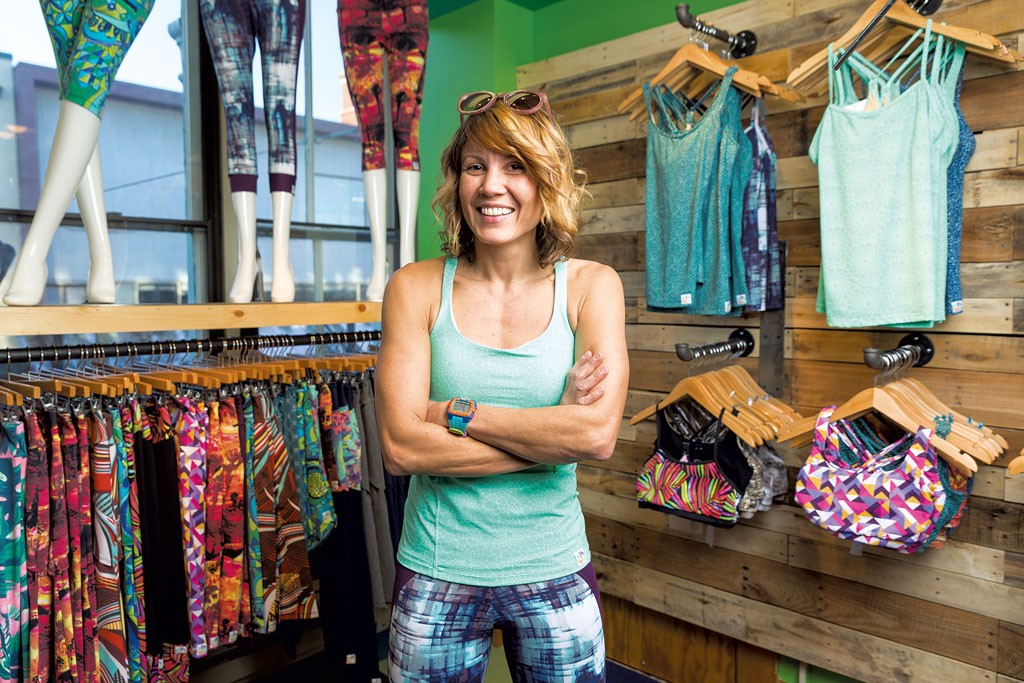 The hottest new Brazilian trend to hit Burlington has nothing to do with waxing and everything to do with working out. And it's nothing like you've seen on local bodies before. Think capris decorated with palm trees, tank tops with tigers, and spaghetti-strap bras in bold checks, swirls and stripes. Basic black and utilitarian gray? No way.

"You can't find this anywhere else," said Amelia Leme with a laugh as she plucked a pair of pants from a rack. Their gold mosaic pattern shimmered in the lights of her brand-new Church Street shop, Mana Threads. "You just can't!" she repeated.

True that. Never mind that Leme sported a fur-lined jacket and boots when Seven Days spoke with her — on the same day that Winter Storm Juno swooped into Vermont with howling winds and snow. Born and raised near São Paulo, Brazil, Leme has amped up the fitness of dozens of clients at South Burlington's Body Resolution, where she's been a personal trainer since 2008. Her newest exercise is bringing the sexy from Brazil to Vermont's active women with her line of patterned, colorful workout wear.

Bearing the tagline "Stand Out," Mana Threads was born from Leme's frustration with frumpy northern fashion. Having dabbled in mountain biking, running, tennis and surfing during her youth in Brazil, she moved to Vermont in 2003. "It was like, 'Mountains, snow — I don't have snow in Brazil. I gotta see that!'" recalled Leme. "Learn another language, learn another culture."

After her visa expired, Leme returned to South America, followed by Pennsylvania-born boyfriend Wesley Grove (who's now her husband). There she found, to her surprise, that life in the north of North America suited her better than sweating it in São Paulo. The couple returned to Vermont in 2008.

"I started falling in love with all Vermont has to offer — the outdoors, and women out there being badass," said Leme, who became a personal trainer in part because of her passion for sports. "And I'm a Brazilian! I hug people — I'm a people person, so it felt like a glove. Or it fit like a glove?"

The available workout wear, however, wasn't fitting her personality. "I'd go get gear and think, Really?" she said. "'Do I need to hike in this thing with the little flower on the collar? No!"

Every time she returned to Brazil, Leme would buy something "cool and colorful" that instantly drew eyes in the Queen City. "But the style — like a deep V in the boob — didn't match what we need here," she said. "So I thought, Why not start my own thing?"

Leme started sewing up a business in partnership with her sister, Anna Carolina Leme (mana is Portuguese slang for "sisters"), and a Brazilian seamstress, Clara Leme (no relation). Between May 2014 and the shop's grand opening last month, the trio produced 750 pieces of hand-stitched active wear.

Right now, the line ranges from sports bras to full-length pants equipped with a skirt ("It adds curves; you don't need to look like a man!" declared Amelia Leme) in just about every color of the rainbow. Many pieces offer a kaleidoscope of brilliant hues. Prices range from $30 for sports bras to $75 for pants. Options include thicker, tighter fabrics for compression and lighter ones for running in warm weather.

The patterns aren't just playful; they also hide imperfections, Leme explained, and they may even inspire wearers to perform better. She cited a University of North Carolina study that found that athletes achieved greater results when they wore bright colors, because they were aware of the extra attention on their appearance.

Leme, meanwhile, has paid extra attention to the décor and ambiance of the Mana Threads retail space, which features bold squares of carpet, warm recycled-pallet changing rooms (courtesy of Grove), and a bowl of coffee beans holding business cards and company info. The petite shop occupies the space upstairs from Little Citizen and formerly home to lululemon, which has moved across the street.

The potential for competition between the two active-wear businesses isn't lost on Leme, who originally envisioned Mana Threads as a web-only enterprise. But the location charmed her, as did the chance to become even more involved in Chittenden County. This northern end of Church Street, she explained, has become a destination for seekers of dynamic sports clothes.

"To be right in front of Athleta and lululemon?" she said. "This is like money for me, because people are coming up here to get athletic wear."

Because hers is an independent business, Leme noted, she can disregard the constraints of mass production and focus on the community. "I can make whatever I want to make and donate 1 percent to the Little Bellas," she said, referring to the local mountain-biking mentoring program for girls.

Inspired by the trail-building and preservation work happening around Vermont, Leme is a singletrack aficionado and a member of the women's mountain-biking race team Mountain Moxie. She's also a mentor for Moxie Sparks, a scholarship program for girls; and for the Little Bellas' riding program at the Catamount Outdoor Family Center.

Of course, that's all warm-weather stuff. How does Leme shake off the deep freeze of Vermont winters? "It's brutal. I'm cold; I've had frostbite everywhere," she admitted, and noted that January was the worst time of year to open her store. "But my roots are getting bigger and bigger here in Vermont; I have too many passions here to let it go."

Another challenge has been making sure that Mana Threads can fit most Vermont women; currently, the sizes skew small and medium. "It's happened so fast, so we don't have a lot of sizes, and I don't want to leave anybody out," said Leme. She'll return from another trip to Brazil this month with a more expansive selection.

Right now, Mana Threads is open Wednesday through Sunday, with additional hours expected this spring and summer. By then, word about its wares will likely have hit local gyms.

"I haven't bumped into anybody I don't know wearing my stuff yet," Leme said. "But when I do, I'll be like, 'Can I give you a hug and take a selfie?'"