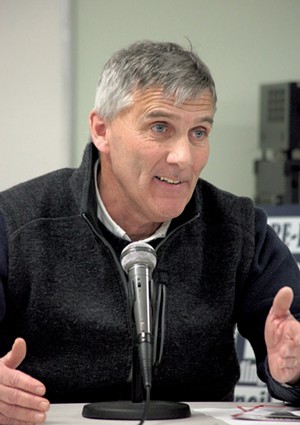 A convenience store manager and a marketing director are vying to represent the largest voting bloc in Burlington. It's an odd matchup: Both city council candidates identify as Democrats — one has the official endorsement of the party, the other has support from the man at the top of its ticket. In the end, will any of that matter to residents of the New North End?

In January, Burlington Democrats chose to endorse Carmen George — marketing director for the TruexCullins architecture firm — over the two-term incumbent Dave Hartnett as their candidate for the North District.

At their caucus, Hartnett gave a meandering speech that focused more on the mayor's accomplishments than his own. He wore his signature shirt, vest and khaki pants combo.

Clad in a teal skirt suit, George then took the stage and removed the microphone from its stand. "I don't know if I've watched too much Oprah, but I like the free mic," she said.

People in the crowd hooted in support when she chided Hartnett for endorsing Republican candidates and, in particular, for serving as Burlington City Councilor Kurt Wright's campaign manager when he ran for mayor against Democrat Miro Weinberger in 2011. "I stood at the polls holding your sign, Miro, while Dave Hartnett held your opponent's sign," she reminded the mayor.

George was in her element among the party faithful who showed up that Sunday afternoon to pick their candidates. She was prepared, too — her speech was polished, and she distributed literature outlining her accomplishments.

It paid off: She won the Democratic endorsement, 72 to 53.

But four days later, Hartnett announced that he was running for the seat as an independent — with Weinberger's support. He put a positive spin on being stripped of his "D," announcing that his campaign would "focus on community, not politics."

To unseat the affable, blue-collar councilor, George will need to adjust her message to appeal to a broader crowd.

Hartnett, 51, was born in Burlington, the fifth of eight children. He, his wife and his 16-year-old daughter live around the corner from the North Avenue Jolley convenience store gas station he's managed for the last 16 years. Before that he sold Pepsi to area stores, including Jolley.

During a morning shift that started at 4 a.m. last Wednesday, Hartnett worked the cash register as if he were campaigning door-to-door. With his bosses' blessing, he'd hung a lawn sign above the chewing tobacco and affixed blue campaign stickers on the newspapers for sale on the counter. A stack of fliers was neatly stacked there, too.

"A little toilet reading," one guy called to the candidate with a grin as he grabbed a flier and left.

Hartnett was unfailingly friendly as he greeted customers — many of them by name. "You get the Wednesday discount!" he told a woman checking out with cranberry juice and a mini-box of wine.

He also unabashedly badgered people to vote for him on March 3. Several customers offered unsolicited praise for his "common-sense" style.

Wright, a fellow councilor who's been friends with Hartnett for three decades, confirmed that he's considered "a refreshing voice, in that he has his own way of speaking. He says what's on his mind, and he tells it like it is." And in the New North End, "He's kind of a beloved figure."

"I'm not a Monday-night guy," Hartnett said — a reference to the regularly scheduled council meetings. While he chatters nonstop behind the counter at Jolley, he's quieter at city hall. When he does pipe up, it's often to personalize the political. "I think I've brought a lot of people to city hall that wouldn't normally come," he said.

For example, Hartnett took the lead during one of the council's most heartrending meetings last year, after a Burlington police officer shot and killed Wayne Brunette, a mentally ill man who approached the cops with a shovel. Brunette lived in the New North End and went to school with Hartnett. Burlington's police chief, Mike Schirling, grew up with Brunette's widow.

Hartnett brought Schirling and Hartnett's widow before the council to testify about how the police department could improve its responses to people having mental health crises. Hartnett teared up as he recalled the incident. He said he continued to work closely with the department afterward.

Hartnett often makes statements such as, "Schools are the cornerstones of our community" and "I think coaches can be great models." But supporters and colleagues say he's lived by those platitudes. Hartnett's father died when he was a high school freshman, and he readily admits that he wasn't a star student. "I was in the principal's office a lot. It was difficult for me to learn how to read and write." He played varsity baseball, basketball and football at Burlington High School and credits his coaches — and his mother — with keeping him on track.

Today, Hartnett runs the Little League program, which covers 14 cities and towns, and umpires on the side. He also organizes a golf tournament to benefit local schools and founded a nonprofit basketball league for underprivileged Burlington kids. Last Friday, Hartnett reported he left his post at the register to drive a customer who'd missed the bus to her job at Kohl's. An elderly man at Jolley praised the councilor for delivering cappuccinos to his housebound wife. Hartnett's own wife is recovering from a kidney transplant.

George, 46, grew up in Barre and moved to the New North End in 2000. She, her husband and 11-year-old daughter live in a 1950s ranch house that used to belong to her grandfather-in-law. Last Thursday, there was an Emerge Vermont binder on her dining room table — the organization trains Democratic women to run for office, and George is a member of their "class of 2015."

But George is hardly a political neophyte. She served on the city council from 2006 to 2008 and has a strong record of community work — she organizes weekly women's soccer and basketball games, serves on the board of the Old North End emergency shelter, ANEW Place, and is an elected justice of the peace.

"She's the kind of person who seems to naturally gravitate toward community service," said Russ Ellis, a longtime Democrat who's lived in the New North End since 1969. Ellis, who also served on the city council with George, remembered her as "a very capable councilor who understood what was going on and was doing a marvelous job of representing her constituents."

George has also been very active in the Democratic Party — most recently as vice chair of the Burlington Democratic Committee. She said she's worked for nearly every recent Democratic candidate in the New North End.

But it's unclear how many of them will return the favor. Outgoing councilor Bianka LeGrand is backing Hartnett. Tom Ayres — like most of the Democratic councilors — isn't choosing a side.

"A lot of people are in an uncomfortable situation," explained council president Joan Shannon, a Democrat who is also remaining neutral.

Though they aren't doling out endorsements, the Democratic councilors didn't hesitate to praise Hartnett. "Dave's a cheerleader for the city and for the New North End and for the kids," Shannon said. "He doesn't really come from a partisan approach."

Hartnett "puts working for people ahead of politics," according to Ayres. Fellow councilors agree that he's been a particularly strong advocate for Burlington schools and the park system.

Shannon, who also served on the council with George, said she didn't recall much about her approach or priorities. "I remember she put forward a breastfeeding resolution. That's the only thing that comes to mind."

Ayres lives across the street from George and said he knows her well, but, "Honestly, I don't know a lot about where Carmen stands on the issues. She's a very strongly partisan Democrat, and I think that's clearly one of the things that differentiates her from Dave."

Last Thursday evening, George set out on foot, navigating icy driveways on Cumberland Road, armed with campaign literature and a list of registered voters. After introducing herself, she told residents of the lakeside neighborhood that affordability was one of her top priorities. To promote that, she explained, the city should encourage development downtown to grow the grand list.

Since the caucus, George has shied away from criticizing Hartnett — probably to discourage the perception that's she's a "very strong partisan Democrat." Asked where Hartnett had fallen short as a councilor, she responded, "I don't want to talk about him."

Post-door-knocking, over pizza and tea at the La Boca Wood Fired Pizzeria, George suggested one reason why she'd make a better counselor: "My skills in business development and understanding technology is something I bring to the table that he doesn't have." As a councilor, she said she'd work to make city websites more convenient.

A candidate forum last Wednesday at the Robert Miller Community and Recreation Center played out differently than the Democratic caucus. Several Burlington High School students wearing "Hartnett for City Council" T-shirts decorated the room with green and blue balloons printed with the same message. His campaign signs were propped in nearly every window, and there were heart-shaped sugar cookies with Hartnett's name written in frosting.

During his opening statement, Hartnett paid tribute to Brenda Trackim — a school employee who died suddenly several weeks ago — instead of making a campaign pitch.

But George spoke softly and haltingly during the Q&A session that followed. When someone asked the candidates what they would do to improve Burlington High School, she mentioned that she'd be attending an education conference in San Francisco and that TruexCullins had designed a school in Madagascar. She failed to discuss the high school itself.

Hartnett was more on point. "Hate to break it to you, but we need a new high school ... and the city has to be a partner."

Attendees took note. Rich Nadworny, a principal at the marketing firm Empatico, supported George when she challenged Hartnett at the caucus. Now he plans to vote for Hartnett. "I was really disappointed by her performance at the candidate forum," he noted during an interview Friday. More troubling, "The question that keeps coming up is: Why is she running? And I don't think she's answered that quite yet."

A Cumberland Road resident asked a variation of that question when George was going door-to-door the day before.

"Why should I vote for you?"

"Because I care about the community," George said.

"Everybody cares about the community," he responded.

The New North End — traditionally a conservative stronghold — has gotten younger, more diverse and more liberal in recent years. Longtime North End resident Ellis has served as the Rock Point School's headmaster for 22 years. "I could document the change right in my neighborhood on Shore Road," he said. George "certainly represents that new influx." Ellis has officially endorsed George but, he continued, "Dave's a very good person. I think that what's important in a democratic process is that a variety of people run for office."

The original print version of this article was headlined "In Burlington City Council Race, Man of the People Faces Woman of the Party by Alicia Freese"