Mamava Cofounder Steps Down as CEO

Mamava cofounder Sascha Mayer has stepped down from the CEO position at the Burlington company, though she’ll stay on as chief brand officer and chair of the company’s board.


Mamava makes mobile lactation suites that are used in workplaces, retail stores, airports, stadiums and anywhere else women need a private place to breastfeed their babies or pump milk. Since its founding in 2013, the company has sold more than 2,000 of the units, which start at $10,000 and come in a variety of sizes.

The pods, which are free to use, can be found through an app that allows the breastfeeding mother to unlock the door of the structure and to customize lighting and airflow. Last fall, Mamava acquired the Springfield, Vt., company that makes the pods, now called Mamava Manufacturing.

Mayer said she and cofounder Christine Dodson began looking for a new company leader in January. The two met Witschi through Cairn Cross of FreshTracks Capital. In 2015, FreshTracks was Mamava’s first outside investor.

"We had a dialogue about how this would be a good fit," Mayer said of Witschi. "It's really going to take us places."

The cofounders were seeking someone to shepherd Mamava through a business expansion in the coming year, when a large expected contract and other growth are anticipated to send annual revenues soaring from $10 million to $20 million. She wouldn't divulge more details about the contract.

“Hopefully, this [change] will allow me to focus on more of my areas of expertise and passion projects,” said Mayer, who will continue her daily duties at Mamava. She also has a book in the works about her experience as an entrepreneur. Dodson will continue as chief operating officer.

Bottom Line: With Walmart Order, Burlington Business Mamava Is Pumping Again
By Melissa Pasanen
Business
Most of the company’s sales are in the U.S., though there are a few pods in London, according to spokesperson Ann Pechaver. There are also pods at U.S. military bases in South Korea and Germany.

Most pods are sold to companies that provide them for employees, but stadiums and airports are also high-profile users that spur a lot of sales, Mayer said.

“It’s almost like they’re a billboard when they’re in an airport,” she said. “Someone will see them and say, ‘I need that for my business.’”

While Mamava is expected to ramp up its sales of lactation suites, Mayer said the company is also branching out with other lactation-related products, including policy guides, consulting and training for employers who want to make their workplaces more accommodating to new mothers.

“That has stemmed from employers saying, ‘We need these spaces; what else can you help us with?’” Mayer said. She and Dodson also work on Vermont parenting policy issues, such as paid family leave. 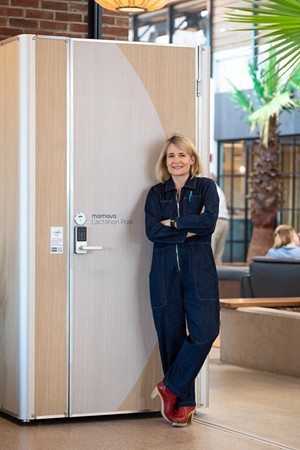 Mamava has about 50 employees, including about a dozen at the Springfield manufacturing facility.

Witschi, who will work remotely from Connecticut, is a University of Vermont graduate who worked as CEO of EatingWell Media Group, including the Charlotte-based EatingWell magazine, from 2005 to 2011. When EatingWell was sold to the Iowa-based media conglomerate Meredith Corp., Witschi became an executive at the parent company, most recently serving as president of consumer products.

Mayer noted that Witschi also worked remotely from Connecticut when he was at EatingWell.

She said keeping Mamava in Vermont is a priority.

“We’ve grown here, we’re based here; it makes a ton of sense,” she said.