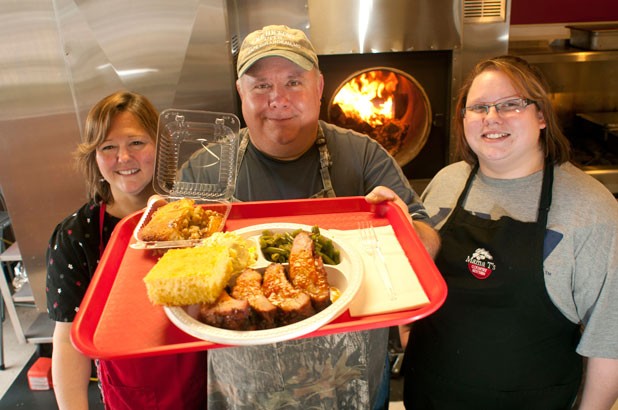 Tropical Storm Irene is responsible for many a heartwarming restaurant rebirth story. Since last year’s floods, affected eateries from Waterbury to Brattleboro have risen from the silt to reopen and thrive. Thanks to generous local donations, even badly damaged Dot’s Restaurant in Wilmington will serve McDot Deluxes again by the end of the year.

The story of Mama T’s Country Kitchen, while just as heartening, goes differently. Without Irene, the place wouldn’t exist.

And that would be a shame. Located in a former Quiznos on South Main Street in Rutland, Mama T’s may be the only place in Vermont where one can taste authentic Texas-style barbecue. Though competition-worthy ribs and tangy chopped brisket are the biggest sellers, owner Theresa House is just as much of an attraction. Her warm presence graces each party that enters as she checks in to make sure diners are enjoying her handiwork.

The energy House invests in the venture is clearly that of a woman who has arrived where she belongs. “Owning a restaurant wasn’t my dream. No, my dream is to feed people,” says the native of Hondo, Texas. “My husband is a big guy — he’s my poster child. I told him, ‘We really need a restaurant, so I can feed somebody besides you before I kill you.’”

House says she and her husband, Eric, have had two goals throughout their 27-year marriage: to move to Vermont “someday” and to open a restaurant. “We wanted somewhere with four seasons, a cooler temperature and abundant water,” House explains.

Six years ago in Texas, House, known to those close to her as “T” or “Mama T,” returned home from work and asked Eric, “Is it someday?” He answered yes, and the pair began searching for Vermont jobs. They both found work in Rutland and packed up their two children, dog and bird for a cross-country drive.

They set aside their second goal of opening a restaurant. It would take six years — and one natural disaster — to put them back on that path. “God is good,” says Theresa House.

When Irene hit, Eric House was working at the six-man Rutland office of the Vermont Agency of Transportation, where he’d been since 2006, despite a brush with death shortly after his arrival in Vermont due to a burst blood vessel in his brain. On August 29, 2011, he received an email telling him not to risk reporting to work, because he was not emergency personnel.

But the Houses didn’t stay at home. They loaded up their barbecue pit with hot dogs and hamburgers and brought them to the recovery crew, along with coleslaw and potato salad. Gil Newbury, then-commander of the Rutland Region Incident Command Center, was so impressed that he asked the family to make their grub a weekly treat for emergency workers.

“Even in the middle of a disaster, even with the intensity of helping people, that [food] got [the workers] to stop,” Newbury says of the barbecue meals. “I just thought I’d died and gone to heaven. After my second plateful, I said to [Theresa], ‘Why aren’t you guys doing this for a business?’”

“Right off the bat, he started calling me Mom,” remembers Theresa House of Newbury. “He said, ‘Mom, that was really good; I think we need to do this every Friday.’ I said, ‘Oh, do we?’ [Newbury] knew he had to keep up morale. He knew it would be a long, hard road.”

Before long, Eric House was tasked with driving FEMA officials around the state. Newbury, disappointed, assumed that meant the end of meal delivery, but “Mom” had other plans. “I said, ‘What do we need Eric for?’” recalls House. She told Newbury that, after 27 years of marriage, she had learned her way around a barbecue pit.

Theresa House and the couple’s 23-year-old daughter, Cymberlee Prencipe, took leaves of absence from their jobs and got cooking. Armed with a brand-new mobile kitchen and a business permit, the pair prepared as many as 215 breakfasts and lunches for recovery workers each day.

By late October, the workers had dispersed, and the state decided to end the meal program. It was a mixed blessing. Though it meant neighbors affected by flooding were getting back on their feet, crew members were going to miss one very important part of the lifestyle to which they’d grown accustomed.

“All the crews kept coming to us saying, ‘How are we going to get your food?’” House recalls. “I told them, ‘We’re going to open a restaurant.’ I looked at my husband, and he said, ‘I guess it’s time.’”

The defunct Quiznos proved the perfect spot for the business: easily accessible, bright and set up for the steam-table service of a barbecue joint.

Eric House wouldn’t hear of an outdoor pit. He didn’t want his wife and daughter running outside to turn meat during a blizzard — not a concern back in Hondo. Instead, the family purchased the smallest indoor smoker they could find. Theresa House fills it with between 20 and 40 racks of ribs a day, but says it can accommodate up to 75.

It can be tough for nonlocals to spot Mama T’s. Located on Rutland’s fast-food-speckled “miracle mile,” it doesn’t yet boast a big sign. Windows are painted with the restaurant’s name and wheat-sheaf-decorated logo. A banner out front promises “Real Texas BBQ, Done Low & Slow,” but those are the only hints of the wonders within.

Once inside, diners line up at the counter to choose their meals. The simple posted menu consists of po’boy sandwiches, daily soups and combo meals, all almost comically inexpensive. The priciest dish is the No. 3 combo, which includes three meats, two sides, a 12-ounce drink from the case and choice of any homemade dessert for $11.75.

The chopped beef brisket outsells the sliced, unsauced version, says House. Though the latter has a pleasant puff of smoke, it’s clear why the chunky, saucy version is more popular. The secret is in the “Moose sauce.”

There’s only one kind of barbecue sauce at Mama T’s, and House learned the recipe from her father when she was 12 years old. It shares her maiden name — and her warmth. The six-ingredient sauce is served hot to keep it from chilling the food on which it’s dabbed or dumped. By this summer, “Mama” hopes to bottle it and sell it at the restaurant. She won’t distribute beyond the store, to avoid having to add preservatives.

Ribs are slowly eclipsing the brisket’s popularity, and with reason. The meaty baby-backs would handily withstand barbecue-competition judging. The soft, juicy meat clings to the bone but pulls away with ease. Just a hint of smoke enrobes the dry rub. A dip in Moose sauce adds a powerful punch of vinegar calmed by sweet tomato and onion.

The rest of the sauce’s ingredients are a secret. So is the type of wood House uses in the smoker (she hints that it’s not usually available in Vermont) and the cheese in Prencipe’s gobble-worthy macaroni and cheese. Whatever is in it, the dish is creamy, yellow Americana on a plate, so addictive that some customers have come to refer to it as “crack and cheese.”

Since opening at the end of last year, the spot has quickly earned a slew of regulars, including police officers and employees at nearby Dick’s Sporting Goods, where Prencipe’s husband, Matt, works as a gun expert. Jim Schneider of Shrewsbury says he can barely enumerate all the reasons he hops on his motorcycle for frequent pilgrimages to Mama T’s. “I love barbecue, and they do it right,” he explains. “It has a great smoked flavor, and they make their own barbecue sauce, which is delicious. It’s very, very reasonable and really, really good.”

It’s not just brisket and ribs that make it worth a trip. Chicken quarters are smoky and moist, retaining a crisp skin despite their wait in the steam tray. Turkey breast is just north of fall-apart tender, with a liberal wash of smoke and a crispy skin of its own. It’s available plain or in homemade turkey gravy.

The newest addition to the menu is German-style sausage that Mama T imports from Texas and smokes herself. It’s great with Prencipe’s macaroni or with creamy pinto beans. The coleslaw is mayonnaise based without added sugar, so the fresh, crunchy cabbage and carrots are the dominant flavors.

Prencipe, her mother’s second-in-command, makes all the desserts. They include Mama’s own recipe for cream-cheese pie, a confection somewhere between cheesecake and a light mousse. Prencipe prefers it with cherries, while House is more likely to eat it with blueberries. Apple cobbler is more like a dense, moist cake filled with sweet, cinnamon-flavored apples. A single serving, included with each meal, overflows a small plastic container. Portions of pecan pie, pineapple upside-down cake and brownies are similarly hearty. Mama T’s sells whole pies, too.

House and Prencipe aren’t the only family members who staff the restaurant. Both of their husbands frequently join them when they’re done with their day jobs. The Houses’ son, Evan, works at Mama T’s, too, along with two of his longtime friends whom his mother calls her “adopted children.”

Eric House’s father made his own contribution to the business: After he passed away last June, Mama T’s was funded entirely by the inheritance. House says she hopes the restaurant will be her legacy to her own children.

“You hear on ‘Diners, Drive-ins and Dives’ [on the Food Network] about mom-and-pop places that have been in business for 50 or 60 years, and now the children and grandchildren are running it. That’s what we want to be,” says Mama T with a broad smile. “And we will know that we’ve made it when Guy Fieri comes through the door.”