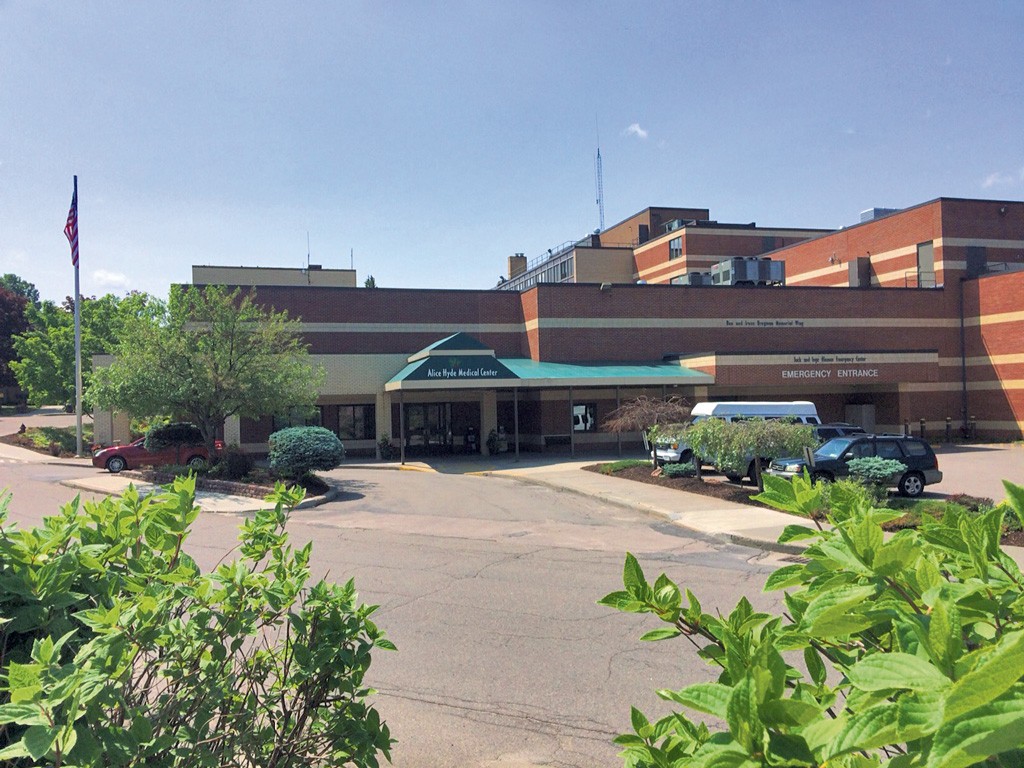 Across Lake Champlain, between the northern boundary of the Adirondacks and the Canadian border, the village of Malone, N.Y. is a long haul from Burlington, Vt. But a sign displayed by the front entrance to the local hospital announces, "Affiliated with Fletcher Allen Health Care."

Generations of Malone residents have traveled east through farm- and forestland to Vermont's largest hospital for their critical and specialty care. The Burlington hospital may be located in another state, but that doesn't seem to matter to Maloners. (Nor, apparently, does the fact that it recently changed its name to the University of Vermont Medical Center.)

"The state border is just a line on a map. It doesn't mean a whole lot when you are looking at health care," said Douglas DiVello, president and CEO of the Alice Hyde Medical Center. Malone's 100-year-old nonprofit medical complex includes a 76-bed hospital and a new skilled-nursing and assisted-living facility.

Alice Hyde's affiliation with the UVM Medical Center goes back 18 years, DiVello said. But the relationship is about to change. In April, the board of the three-year-old University of Vermont Health Network invited Alice Hyde to become a member. The small medical institution in this rural community would become the third Adirondack-region hospital in the network, which currently consists of UVM Medical Center, Central Vermont Medical Center in Berlin, Champlain Valley Physicians Hospital in Plattsburgh, N.Y., and Elizabethtown Community Hospital in the heart of the Adirondacks.

"This is an exciting new milestone in the long collaborative relationship between the University of Vermont Medical Center and Alice Hyde Medical Center," Dr. John Brumsted, president and CEO of the network and CEO of the Burlington medical center, said in a statement after the April 1 vote. The "affiliation" agreement — through which Fletcher Allen set up specialty programs and sent med students and residents over on rotations — had become obsolete, Brumsted said in an earlier interview. "If you don't have tight relationships, you don't get the most efficient model," he said.

The UVM Health Network began as a partnership between the academic medical center in Burlington and the Central Vermont Medical Center. The CEO at the 80-bed hospital in Berlin saw the partnership as a way to ensure that her hospital could continue to offer a full array of affordable basic medical services. In return, the move connected UVM Medical Center with a broader base of patients who benefit from the most advanced medical care offered there.

"Alice Hyde is an important point of access for health care in the rural northern New York region," Brumsted said. It runs four family health centers scattered around Franklin Country, N.Y., and a walk-in clinic in the neighborhood of well-kept Victorian homes where the hospital is located. 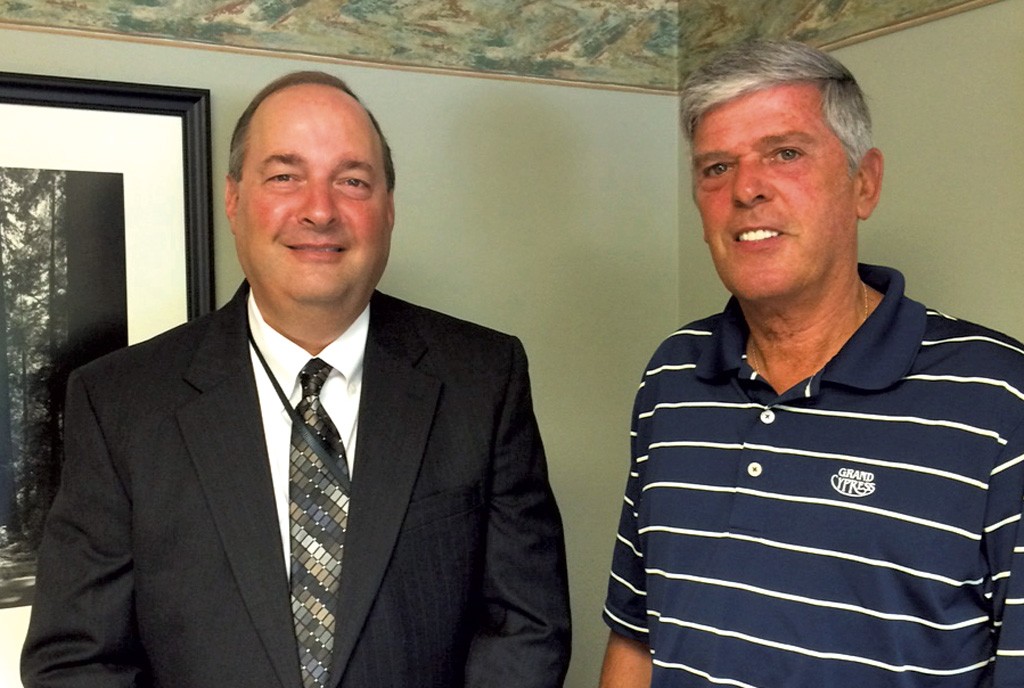 As a network member, Alice Hyde will have to change its governance structure, which means surrendering some independence. Members pool their debt, develop a combined budget, share business and planning operations, and look for opportunities to integrate clinical services. The network board has the final say over each hospital's budget, capital projects and the choice of each facility's CEO.

"There is good and bad to that, but a lot more good than bad," said Dan Clark, who has been on the Alice Hyde board of trustees since 1980 and currently serves as its chair. He noted that the hospital could have looked at partnering with big medical centers in Albany or Syracuse.

"We had choices," he said. "But if you are picking someone to partner with, why not pick someone you are comfortable with?"

Clark emphasized that Alice Hyde chose to join the UVM Health Network. "It is more from a desire than a need," he said. "We are joining a group. We aren't being taken over."

DiVello, who became Alice Hyde's CEO in 2012, ticked off the benefits the hospital will see from joining the network.

It will be in a better position to respond to changes in hospital reimbursement. "Hospitals are going to be rewarded if the health of the community improves," DiVello said, but noted, "It is very difficult for a small hospital to improve the health of the population."

The network offers "the advantage of a multi-hospital health care delivery system," he said. Alice Hyde will be able to enhance existing ties to specialists and bring some specialty services to Malone so patients don't have to travel.

DiVello cited business advantages, too, such as jointly buying supplies and medical equipment and consolidating administrative functions. "There are lots of opportunities to lower operating costs," he said. The current four-hospital network has cited $6 million in savings since 2012, but that's a small number compared with the $1.6 billion combined annual budget for those hospitals.

DiVello said the partnership will also mean easier access to capital for future projects. Alice Hyde just completed a big project: The Alice Center, a complex that includes 135 skilled-nursing beds and 30 assisted-living units, replaced two aging nursing homes. Being able to borrow money is important, DiVello said, to help with future upgrades to information technology, a concern at hospitals across the country. He explained that today each network member has its own medical record and information systems. "Our goal is to create one integrated electronic platform," he said.

Finally, DiVello pointed to an intangible benefit: a connection "with one of the preeminent medical centers in the country." It is a link that Alice Hyde has long touted on its signs and website. As a network member, the hospital will feature the brand everywhere — from staff badges to stationery. "We are proud to be affiliated with them," DiVello said. "The brand creates a very professional image in our community."

Alice Hyde isn't the only New York hospital the University of Vermont Health Network is courting. Fitch, the credit rating agency, reported earlier in June that the network was talking with a "two-hospital system in Lawrence County." Fitch noted the initial expansion of the network, from two Vermont medical centers to include two New York hospitals, had gone smoothly.

The Fitch report cites several reasons why the network is expanding in New York. Upstate New Yorkers have long sought specialized care in Burlington. Extending the network reinforces these links while also helping some specialties operate at the smaller hospitals, where costs are lower. That reduces overall network expenses.

Fitch also states that the UVM Medical Center has a better chance to grow "market share" outside its traditional service area by adding upstate New York hospitals to the network. Fitch noted that the medical center's service area in Vermont is unlikely to expand southward because patients in the southern half of the state look to Dartmouth-Hitchcock medical center in New Hampshire for specialized care.

While Alice Hyde has jumped at the chance to join the network, the Northwestern Medical Center in St. Albans has chosen to remain outside the circle. It is similar in size to Alice Hyde and a mere 29 miles north of Burlington.

Brumsted noted, "We have had conversations with them at the board and administrative levels, and we have a number of shared programs."

Jill Berry Bowen, Northwestern's CEO, said the dialogue is ongoing. She suggested that joining the network isn't the only way to collaborate. Her 70-bed hospital has a long tradition of working with the medical center. "We are pleased to host their dialysis clinic on our campus, to partner with them to provide cardiology and urology services here in our community," Bowen said. "I believe our organizations are showing there is more than one way for hospitals to work together."

Meanwhile, Alice Hyde has to clear a few hurdles before its representatives sit down at the network table. Brumsted said the first step is a due-diligence process that runs for 90 days and requires all parties to open their books. If they are satisfied, they sign a binding agreement. New York regulators must then review the agreement.

That means by the end of the year Alice Hyde could put up a new sign at its entrance denoting its new affiliation and name: UVM Health Network — Alice Hyde Medical Center.

"Most people think it is a terrific move," said Hugh Hill, a Malone village trustee and executive director of the local chamber of commerce. "There is a familiarity with Fletcher Allen. Most people are quite pleased with that relationship. This," he added, "is a health care model beneficial to rural hospitals."