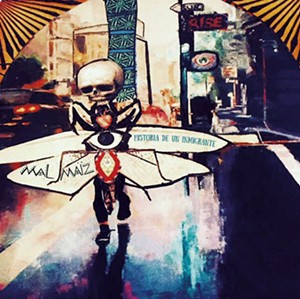 Mal Maïz are an Afro-Caribbean ensemble with a serious pedigree and the chops to match. They emerged from the long-running Latin Sessions at Burlington's Radio Bean, a Monday residency led by Costa Rican inmigrante Maiz Vargas Sandoval. A bandleader in the traditional sense, the multi-instrumentalist handles all the arrangements and teaches his ensemble all the parts.

His band's debut, Historia de un Inmigrante, is an autobiography told in archetypes. Sandoval mines his personal past for universal truths, and the album is a compelling journey. It is deliberately paced, tracing an arc in seven songs with a gorgeous bed of jungle and forest sounds threading between them.

Much of this story is told purely through music. Opening track "Country Cumbia" is an instrumental reverie with some laid-back horn lines that marches into "Clandestino," where things really get started. With its tightly conceived arrangements, the EP hits you like an album. Sandoval's outfit turns on a dime, but its flash always sounds organic.

On "Fantasma," Sandoval marries form and function, integrating a more urban, radio-pop feel with meditations on how cities affect traditions — and identity itself. When the band gets cooking here, it sounds like Ozomatli.

The most overtly pop fare is "Producto de la Mente," a crackling reggaeton anthem about re-creating yourself. What makes Sandoval's story so relatable is his forward, open vision: He is wrestling with how to be a world citizen while staying true to his roots. The result is like a welcoming party sent from a better future.

The album closes with "Huru Huru," an invocation over percussion that Sandoval calls "a mantra of protection." The drums do most of the talking, and it all washes out into the peace of the jungle again.

At every turn, Historia de un Inmigrante sounds impeccable. That quality is due to Sandoval's creative vision, of course, but producer/engineer Joel Denizot was equally essential. An experienced console dog and music educator, Denizot cut his teeth with the cutting-edge world-music label Cumbancha. His deft touch makes every track here shine.

Maybe it's just my age showing, but listening to Historia de un Inmigrante, it's hard not to be reminded of another BTV immigrant with high-energy live shows and politically charged songwriting: Ukrainian transplant Eugene Hütz, who went on to do pretty big things with his gypsy-punk band Gogol Bordello.

There's no telling how grandiose Sandoval's ambitions are. But there's also no reason his globe-spanning journey would stop at Radio Bean. The man has juice.

Historia de un Inmigrante is available at CD Baby. Mal Maïz perform on Friday, June 8, at the Top Block Stage on the Church Street Marketplace as part of the Burlington Discover Jazz Festival.