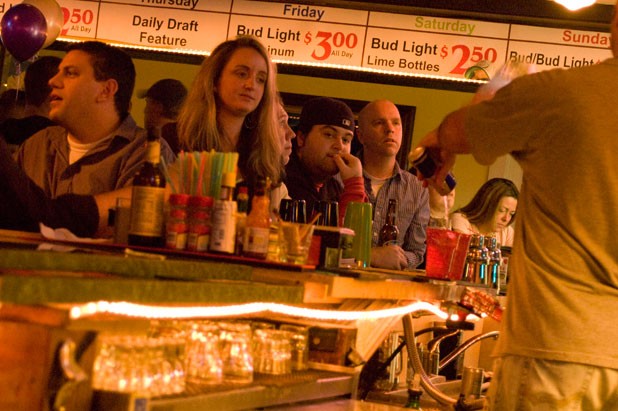 Well, you gassed her up. You’re behind the wheel, with your arm around your sweetheart in your Oldsmobile. You’re barreling down the boulevard, looking for the heart of Saturday night.

It’s a recent Saturday night in November and I am indeed barreling down the boulevard. Well, OK, Pearl Street in Burlington. And I’m in a taxi, not an Oldsmobile. But my arm is around my sweetheart as we cruise past the top block of a bustling Church Street Marketplace. On the corner of North Winooski Avenue, two of the Queen City’s more reliable nightspots, The O.P. and Radio Bean, already boast sizeable crowds. Typically, we might be among those revelers. But tonight our destiny lies elsewhere.

Our chariot speeds us past Pearl Street Beverage and up the hill. As expected, pedestrian traffic is running against us, as mini-mobs of college students make their way toward downtown. We zip past the University of Vermont and the hospital, and through the intersection of Pearl and East Avenue. Winding past a cemetery, we notice a number of streetlights have burned out. Then, just as quickly as we enter the dark of night, a faint orange glow appears and invites us onward. And so we descend the hill into the city of Winooski, looking for the heart of Saturday night.

And maybe a good bar or two.

Following a quick meal at Pho Dang Vietnamese Café, we make our way north by foot along Main Street. We have been joined by three companions — let’s call them Lila, Tim and Jerome — all veteran night owls. Our goal: to make the rounds in the Onion City and assess its nightlife.

>There’s a palpable sense of anticipation surrounding our first stop, O’Brien’s Pub, formerly The Raccoon Lodge. Until now, this particular bar has remained a curiosity among our crew. Despite the “Public Welcome” notice posted beneath the bar’s exterior signpost, none of us had dared set foot in the joint before. We had subscribed to the conventional wisdom that it was a private club, which it no longer is — and, according to the bartender, hasn’t been for a very long time.

I expect a classic “stranger saunters into the local saloon” scene: record scratching to a halt, heads swiveling as the locals suspiciously eye the interlopers. But when we enter, hardly a soul among the 20 or so folks gathered around the horseshoe-shaped bar so much as glances in our direction. Journey blares uninterrupted from the jukebox.

We order a round of beers from a surprisingly varied selection, though, as Tim notes, it’s strange that an “Irish bar” doesn’t serve any Irish beers. Taped to a sanitarium-green concrete wall, a handwritten sign advertises New York strip steaks for $10.95. Making our way past this, we settle into the bar’s back room. It features an enormous flat-screen TV, free pool, a dartboard and the holy trinity of bar videogames: Golden Tee, Silverstrike Bowling and Big Buck Hunter Safari. Curiously, against a half wall is a stack of wood. “You gotta love a bar where you can order a beer and feed the woodstove at the same time,” says Jerome, nodding to said woodstove in a nearby corner.

Through two games of pool, we find the blue-collar feel agreeable. Conversational chatter ebbs and flows, interrupted by the occasional hack of a grizzled barfly’s phlegmy cough or laugh. A lone couple dances awkwardly, pausing only to intermittently, and intensely, make out. As Toby Keith might put it, “Mm-mm-mm, I love this bar.”

We dally too long at O’Brien’s and, now back in “downtown” Winooski, just miss last call — and more importantly, flaming Scorpion Bowls — at Peking Duck House. Undeterred, we stroll a block down Malletts Bay Avenue to C.K.’s Sports Bar, formerly the Trackside Tavern.

The joint is jumping. Though it’s an atypical Saturday, regulars later tell us, because a good chunk of the crowd is celebrating a “Dirty Thirty” birthday party — with exceedingly loud karaoke.

Those who fondly remember the Trackside probably still dig the bar, which changed hands and names about eight months ago. It’s had some minor cosmetic upgrades — a new carpet, six flat screens and the aforementioned holy trinity. But, pointing to the disconcertingly warped beams along the ceiling, Jerome opines, “This place is structurally unsound.”

His assessment doesn’t appear to faze the crowd of late-twentysomething and middle-aged locals. As we depart about an hour later, they seem to be reaching their collective peak.

Back in the roundabout district, we walk into McKee’s Pub and a comely barmaid greets us with a friendly “evenin’” from behind a row of taps. Perhaps it’s the comparatively upscale environs, but we forgo our standard Bud bottles in favor of a round of Switchbacks and Guinness (the latter poured correctly, an increasingly lost art), and get cozy in a large booth in the back room.

While C.K.’s overtly advertises itself as a sports bar, McKee’s simply is one. Above a pool table and wrapping around three of the room’s four walls are roughly a dozen flat-screens. Even in the smaller front room, there’s hardly a bad viewing perch to be found. We unanimously agree this would be a great place to come on a Sunday afternoon for football — and maybe brunch. But this is Saturday night. And, at least this particular evening, it is sparsely populated.

We head back out into a virtually deserted downtown and make our way towards 38 Main, a corner bar next to Sneakers, fully expecting yet another sports-ish, dive-ish watering hole. But as we draw nearer, the unmistakable brassy strains of salsa music spill into the street.

Sure enough, crossing the threshold we are met by a steamy but not unpleasant musk hanging in the air. Under the spell of DJ Raul, the makeshift dance floor — the narrow space along the bar — is undulating with a phalanx of whirling couples. And they’re really good. Adding to the intrigue, our lily-white quintet is very much in the minority; most of the crowd consists of men and women of varying Latin lineage. How often does that happen anywhere in Vermont? (Answer: at 38 Main, every other Saturday.)

Initially, we play the role of wallflowers, thoroughly entertained by just observing. But before long, our female companions find themselves gleefully in the thick of it. As Lila later remarks, beaming and flushed, they were “gang-salsa’ed.”

We finish the evening in the friendly confines of The Monkey House, intentionally last because it’s the Winooski bar we know best — in large part because it’s a live-music venue and the reason our group crosses the river with any regularity. It’s growing late and, save for a stray mic cord on the stage, you wouldn’t know local surf-noir band Barbacoa has played earlier. But the unusually low-key atmosphere fits our particular needs at the moment. Over a round of cheap domestic lagers we begin recapping the events of the evening, ultimately drawing the same conclusion: We had a blast.

Among us the reasons vary — the working-class charm of O’Brien’s, the seedy vitality of C.K.’s, the cute bartender at McKee’s and, of course, suave Latino dancers. Also, there were no lines or cover charges. The drinks were reasonably priced — in some cases, dirt cheap. There was a refreshing lack of fashionista pretense. And hardly a UVM student to be found.

Polishing off his High Life, Jerome succinctly states the overarching theme: “The great thing about Winooski is that it seems unconcerned with trying to be Burlington. It just is what it is and everyone is cool with that.”