Making Space: A Conservationist and Generator's Executive Director on Parenting a Teen in Their "Urban Box" 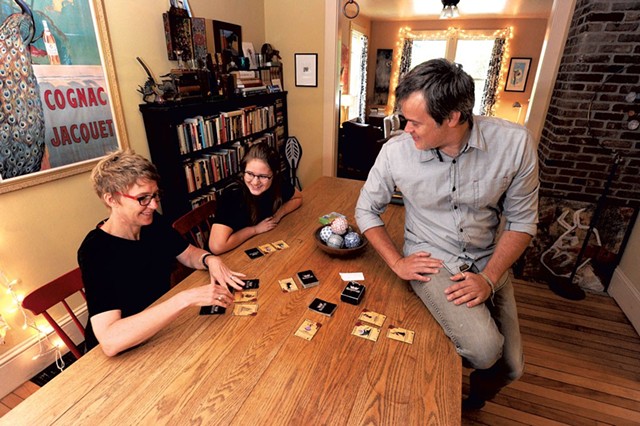 Relaxing on his porch on a warm September evening, drink in hand and black Lab at his feet, Lars Hasselblad Torres is a happy man. Last November, he and his wife, Cathleen Maine, and their teenage daughter, Isabel, relocated to Montpelier from rural Cabot, where they'd lived for more than a decade.

The couple wanted to be in a more a "bikeable and walkable city" and to give their daughter a more culturally diverse and urban environment, Lars says.

The move cut down the commute time for Lars, who runs Burlington Generator, a maker space and business incubator. Cathleen enjoys a short walk to her job at the Northeast Wilderness Trust, after working from home for many years as a women's health advocate focusing on HIV and AIDS.

Downsizing from a large house with land and a barn, they opted for a 106-year-old Victorian that Cathleen describes as a "foursquare" — four rooms on top of four rooms, plus one bathroom upstairs — a stone's throw from Hubbard Park and the Statehouse. Lars affectionately calls it their "urban box" and says the reduction in indoor and outdoor chores has freed them up to spend more time together as a family.

The inside of their home is cozy and uncluttered, with warm colors and wood floors. Cathleen and Isabel love to spend time baking and cooking in the small, organized kitchen at the back of the house, using stacks of cookbooks for inspiration.

When he isn't working with artists and innovators at Burlington Generator, Lars can be found pursuing his own artistic endeavors in his home studio or jogging with his dog late at night to calm his busy mind.

Cathleen: Lars and I don't actually sit down and make plans for strategies necessarily, but we have a really good natural synergy for understanding who's doing what and what the other person can do to support that. If I cook, he does the dishes. If he cooks, I do the dishes.

Lars: With the exception of laundry, because I don't understand it.

Cathleen: Laundry is complicated. [They both laugh.]

Cathleen: He does something else, like recycling and trash.

Lars: Yeah, something else!

Cathleen: One thing that I really like about our values is that we make sure we have at least one meal that is a sit-down meal every single day. And when we were both working from home when Isabel was younger, it was two meals or three meals. So we were always talking, always engaging, and I think that was an incredible experience for building our foundation. Now that she is in high school, we definitely eat every dinner together. That check-in time is really important.

Cathleen: Mornings are great! I get up before everybody at around 6 a.m. I need an hour to myself. I make coffee, and then I wake Lars up.

Lars: With a hot coffee! It's amazing. It's a gift.

Cathleen: There are studies that have come out now saying breakfast is not the most important meal of the day!

Lars: Izzy is on her own for two to three hours a day. Cellphones make it easier. She's a good Snapchatter, like all kids her age, and I'm a good texter!

Lars: I think I am able to dedicate my creative energy 99 percent to the areas it needs to be. Very rarely do I have to say, "I can't do that, because Cathleen's got X over here." Our house is organized and welcoming because of Cathleen, not because of me. I am the agent of chaos.

Cathleen: I do the tidying up and cleaning, but Lars is in charge of artwork and furniture placement. So he's kind of like my stylist, and all I have to do is keep things neat.

Lars: I think date night is overrated! We went to see the film The Lobster as a family, and we are doing the same thing as a date night, except there's this 14-year-old mind that is so curious, so we get this whole other enriching conversation. I mean, we get up in the morning and go for coffee and have some catch-up time. And we have plenty of pillow-talk time since Izzy is off and gone a lot, so we find these little moments.

Lars: I delight — maybe overly — in Isabel's creative exploits. Oh, do that bigger! Our life is surrounded by the arts. I try to engage her in the artifacts of my work but not the substance of it so much. Isabel is a talented young illustrator, and I don't want her to have a sense that dedicating yourself to the creative arts means you are constantly broke.