Making It: How Green Mountain Manufacturers are Staying Competitive 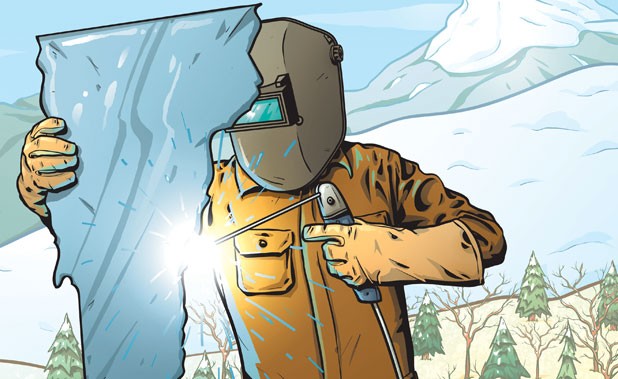 Since 2001, Vermont has lost 180 manufacturing companies — and 15,000 jobs — to industry forces largely beyond its control. The silver lining? Those businesses left standing are doing all kinds of things right.

“We’re on the verge of a pretty bright time for manufacturing in Vermont,” predicts Paul Demers, a business adviser with the nonprofit Vermont Manufacturing Extension Center. His optimism is based on recent statistics and, more importantly, on what he sees working in the field: Those Vermont companies that still make things are developing a formula for future success involving production of specialty products and relentless innovation.

“We’re not about smokestacks here anymore, if we ever really were,” observes Daniel Van Der Vliet, director of the Vermont Family Business Initiative based at the University of Vermont. “We’re about moving into niches and producing high-quality products.” Van Der Vliet points to Simon Pearce in Quechee and Gordon’s Window Décor in Essex Junction as “good examples of companies that started here, stayed here and excel at what they do.” Simon Pearce is world renowned for its hand-blown glass objects, while Gordon’s designs and crafts energy-efficient blinds.

Mathew Barewicz, chief of the market information center at the state labor department, agrees that Vermont manufacturing is on an upswing. The sector grew 3.6 percent in 2010, which Barewicz describes as “a very positive year for Vermont manufacturing.” More than consumer spending, Demers adds, it’s manufacturing that is now leading the country out of the recession.

And despite the losses Vermont manufacturing workers suffered in the past decade — a plunge from 46,000 to 31,000 jobs — the rate of decline was actually less steep here than in the country as a whole, Barewicz notes. Manufacturing also remains more important in Vermont than nationally, with 11 percent of jobs in the state based in that sector, compared to 9 percent for the U.S. in general. “We’ve probably got the strongest manufacturing sector of any state in New England,” Demers adds.

Barewicz agrees that niche positioning gives Vermont’s mostly small manufacturers certain advantages in a cut-throat global environment. “It reflects the entrepreneurial and innovative spirit of Vermont,” he says. One Middlebury company, for example, saw an opportunity in men’s neckwear. Beau Ties is now the country’s premier maker of bow ties.

“You have to be effective at what you do, certainly, but that isn’t enough,” says Demers. “You’ve got to be constantly creative. The Chinese have learned to do many of the effective things we do here.”

What can we do that the Chinese can’t? A lot of Vermont companies have the advantage of being nimble — read: flexible. At the suggestion of a physician, Vermont Precision Tools adapted its steel-rod technology for a medical application that now accounts for a considerable percentage of its revenues. David Blittersdorf has followed the ever-changing renewable-energy industry from wind to solar, innovating all the way.

Typically, consumers are willing to pay more for a customized product. WallGoldfinger earns top dollar for its high-end office furniture. Branding an item as a Vermont product is a measurable plus, especially when its edible. Both Cabot and Vermont Butter & Cheese creameries successfully market their products as “premium” that way. The same can be said for the many craft breweries that have sprouted in the state in the past two decades.

It isn’t necessary to race to the bottom of the wage scale in order to achieve success as a manufacturer, Demers adds. Manufacturing workers in the state earned an average yearly wage of $51,819 in 2009; the average for all Vermont workers was $38,767, according to the state labor department.

Vermont workers have earned a reputation for hard work and loyalty — perhaps because of limited opportunities to move into new, comparably paying positions near their homes. Nevertheless, some companies — Gardener’s Supply and King Arthur Flour, for example — are further ensuring that dedication by giving their workers stakes in the business. Employee ownership is the ultimate means of empowerment, and it’s something that Vermont cultivates more than most states. The CEOs of Chroma Technology, maker of optical filters for microscopes, and Sonnax, a supplier of automobile transmission parts, both attribute the success of their Bellows Falls-based businesses in part to the stakeholder ethic of their respective workforces.

The Vermont Manufacturing Extension Center, or VMEC, provides the kind of on-the-spot workplace analysis that in other places might be handed down by expensive private consultants. As a result, Demers’ 15-year-old public-private partnership, based at Vermont Technical College in Randolph Center, ranks as the go-to group for manufacturers anxious to make better use of their resources and tap into new markets.

What exactly does the extension center do?

Demers offers the example of its work with Burlington’s Edlund Co., one of the last American makers of can openers. An analysis of factory operations revealed that reconfiguring Edlund’s assembly line would reduce repetitive-stress injuries among workers while making the production process far more efficient, Demers recounts.

Similar gains in cost effectiveness were achieved by Classic Designs in St. Johnsbury after a consultation with VMEC’s experts. The maker of table legs for high-end furniture companies was able to radically reduce its inventory and streamline its manufacturing systems, Demers reports. What would previously have taken Classic Designs a week to build can now be finished in two or three days, he says.

VMEC doesn’t tell client companies what to do. “The main thing we do is to help people think differently,” Demers explains. “Our goal is to develop human resources, to enable people to find their own solutions.” That may include referring a business to a program run by the state’s Department of Economic Development that cross-trains employees within the same company. In partnership with VMEC, the little-known Vermont Training Program has managed to “advance the professional development of thousands of employees of Vermont manufacturing companies,” says Demers.

VMEC advisers typically spend four to six months working with a particular firm that has sought their expertise. Most of the extension center’s budget is derived from these paid consultations, with federal and state funds accounting for much of the balance, Demers explains.

VMEC also organizes conferences such as the Innovation Engineering Leadership Institute that took place this week in Woodstock. The institute is intended to serve as an incubator of ideas that may prove valuable to Vermonters in the consumer-products and tech sectors, which accounted for most of the participants in the three-day event, Demers says.

Successful outcomes are not guaranteed, he notes. “The aim really is to find out quickly whether something new will work. It’s a fail fast, fail cheap approach,” Demers says. “What we’re mainly trying to do is to get people thinking about innovation as a driver of jobs.”