Making Bitters, With Urban Moonshine as a Guide 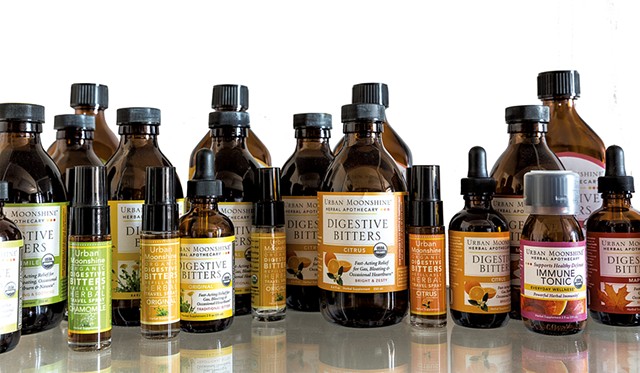 Herbalists and creative drinkers looking for a crafty activity this winter are in luck. In DIY Bitters: Reviving the Forgotten Flavor, Urban Moonshine cofounders Guido Masé and Jovial King offer a detailed guide to making your own tinctures and bitters. Essentially, they tell you how to make your own versions of the artisanal products that their Burlington-based company sells.

This tincture-making reporter found DIY Bitters well designed and user-friendly, an excellent introduction to the centuries-old intersection of herbalism and boozy conviviality. Masé and King profile the properties and tincturing processes of nearly 100 herbs, then give recipes for bitters blends made from those tinctures.

"The basic bitters formula consists of something bitter, something aromatic that has a flavor note or personality that defines your bitter, a starch that binds it together and makes it more velvety, and maybe some sweetness," Masé told me as I shopped for herbs at Railyard Apothecary on Burlington's Battery Street.

When choosing which herbs to include, Masé said, he and King consider both their flavors and their medicinal properties. Burdock root is a fine bitters base, but what about using astragalus instead, which boosts immunity? "Once you let yourself stretch the definition of what 'bitter' is, you open up the ingredient choice dramatically," Masé said. From the processes outlined in the book, he said, "The herbalists will learn how to formulate something delicious; the bartenders will learn about the medicinal activity of the things they're putting in their drinks."

A tincture is a solution of a medicinal substance in alcohol. Although the tincture-making process is similar for most herbs, crucial details vary, including the optimal proof of alcohol, the quantity of herbs and the steeping time. A tincture made from fresh rose petals can be extracted in 150-proof spirits in just 10 minutes; dried dandelion root should steep in 80-proof spirits for three weeks. Many of the recipes in DIY Bitters call for three ounces of dried herb or root in 12 ounces of alcohol, but some require less of the herb. All tinctures should be shaken every few days until they're ready to strain.

In an interview at Urban Moonshine, King said it's safe to compost the spent herbs. Your compost pile won't become a fire hazard, since alcohol evaporates quickly, and critters that eat the leftovers won't get alcohol or herbal poisoning.

The Moonshiners strongly encourage readers to tincture each herb individually and then combine the tinctures to make bitters blends. Unlike the folk method of mixing herbs in a jar, covering them with vodka and straining them after a month, individual tincturing allows for optimal extraction and adjustment of bitters recipes according to taste. 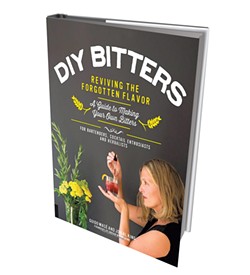 I learned this the hard way when I used the folk method to make a sleep-aid tincture with passionflower, chamomile, skullcap and valerian. Valerian's scent evokes day-old roadkill caked in mud, and the root is best used with a light hand. Mine was heavy, and the result tasted like something I created to punish myself.

By contrast, I was pleased with the digestif I made using the folk method: anise, star anise, cinnamon, cardamom and black pepper steeped in 80-proof vodka. But the anise I tinctured later using the suggested 150-proof was significantly more aromatic. Lesson learned: Tincture herbs individually and correctly; laziness can yield regrettable results. The price of herbs, liquor and mistakes can add up; spending $25 on a guide book is well worth it.

Bitters making is for people who enjoy the process, including a few detours. The optimal alcohol proof in which individual herbs should be extracted varies from 80 to 150, for instance, and finding 150-proof alcohol in Vermont is a task in itself. Bacardi 151 was recently discontinued, and this reporter has not found 150-proof spirits for sale. The best option for making high-proof tinctures is to buy 190-proof neutral grain spirits and dilute.

To make 12 ounces of 150-proof alcohol, measure about nine and a half ounces of 190-proof liquor and add enough water to total 12 ounces. In Vermont, liquor stores must keep neutral grain spirits behind the counter, and not all stores stock it. Buyers are required to fill out paperwork for the Department of Liquor Control that includes their identifying information and "purpose for which alcohol will be used." "Making tinctures" is a legally acceptable response; "drinking" is not.

For Vermonters who want organic spirits, the only DIY option, besides ordering in five-gallon increments online and paying for shipping, is to contact Still Thyme Spirits and pick up half-gallon quantities of organic 190-proof neutral spirits from its Middlesex location. If this all sounds too involved, you can create bitters from purchased tinctures.

Or try one of the recipes in DIY Bitters that don't contain alcohol. I take a kava ginger pastille or three when I feel stressed, after a meal or before bedtime. Akin to a less-sweet mint, the slightly numbing pastilles do for me what cigarettes once did: They provide comfort and ease conversation, satisfy an oral fixation, and are mentally habit-forming and a cool thing to offer someone you want to impress.

Masé wants DIYers to know that the book's bitters recipes "are just a starting point." He encourages readers to experiment, as long as they keep blends balanced: The bitter part should be only about one-third of the volume.

"Herbalism is very similar to cooking," King noted. "There are a lot of different ways to do it. People can get kind of rigid and think about herbs in the same way they think about drugs. They're not drugs."

She suggested that budding herbalists learn to make a bitters blend to aid digestion, a sleep formula and a stress formula. "The main herbs you're going to reach for are very safe and very useful," King said. "There are very few side effects, if any, with the herbs we put in the book."

Masé, who has been a practicing herbalist for 17 years, said the information about herbal properties in DIY Bitters comes from traditional knowledge, contemporary pharmacological clinical studies and meta-analyses, as well as from his own observations in his clinical herbal practice. Herbs can help manage chronic medical conditions, especially cardiovascular disease, diabetes and obesity, Masé elaborated. Many of his clients notice improvement in their digestion, he said.

King stressed that herbs have the most impact when we take them regularly over time. She advises "hitching" their consumption to daily routines; for example, take an energizing tonic when grinding coffee in the morning, or bitters when cooking in the evening. Or substitute bitters for sweets when a sugar craving arises. Bitters have markedly improved her digestion, King said, and regular use of Urban Moonshine's Simmer Down Tonic has helped her cope with stress and diminished the dark circles under her eyes.

Six weeks of experimenting with making my own bitters and taking them daily has made me feel like I'm engaging in regular physical self-care. Bitters have expanded my palate and increased my appreciation for different flavors and sensations, which in turn has broadened my cooking choices.

I like the conviviality of sharing bitters, too, as they keep my partner and me lingering at the dinner table to sip digestifs. My sleep is starting to improve; my stress a little eased. How much of that can be attributed to bitters, and how much to yoga, meditation or the placebo effect, I don't know. But I've noticed that my previously low interest in sugary foods and drinks is now nearly nonexistent.

Most evident is the effect of bitters on my stomach. If awards were given for healthy digestion, I would receive a gold star every day.

Worried about the state of our nation? Concerned about losing your health insurance? Masé created Resist! Bitters with American anxieties in mind. He includes "artichoke to get the anger out, lemon balm to uplift, orange to bridge the gap between the bitter and citrusy-ness, and hawthorn for the heart."

Pour ingredients into a bottle and shake well. Add a bit to sparkling or warm water, mix with vodka or brandy, or add to a Negroni.

These bitters will make your vodka martinis shine. Masé says the herbs act as diuretics and support kidney health. This blend includes codonopsis, also known as dang shen, which is a common herb in traditional Chinese medicine.

Pour ingredients into a bottle and shake well. Add a few drops to a dirty martini, or add to a bit of warm water for an after-dinner drink.

The original print version of this article was headlined "Bitter Remedy"