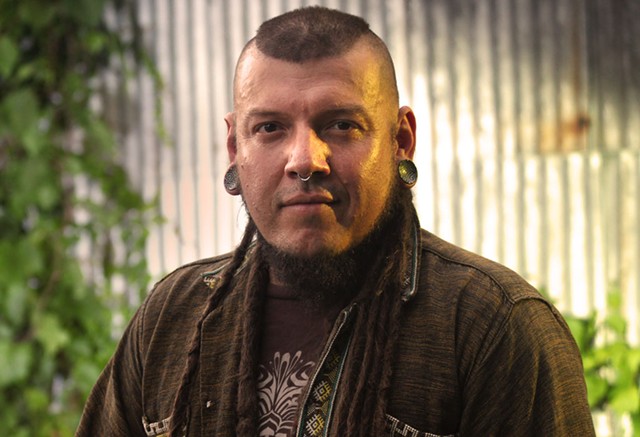 Maiz Vargas Sandoval stands outside his rehearsal studio in Burlington's South End smoking a hand-rolled cigarette. The stoutly built Costa Rican multi-instrumentalist is clad in earthy, natural fibers. His shirt is embroidered with images of the resplendent quetzal, a brightly plumed bird native to his home region. With ornately detailed plugs, a septum piercing, multiple tattoos and an avant-garde hairstyle — half-shaved and half-dreadlocked — Sandoval stands out among the city's more conservatively dressed denizens. Despite his ostentatious appearance, he says he often feels like a ghost.

Sandoval, 35, moved to Vermont from Costa Rica about four years ago. He's best known in the area for fronting Mal Maiz, a collective that plays various styles of Latin American and Afro-Caribbean music. Though he's a permanent, legal resident — he holds a green card — his status comes with few protections.

"It's like a paradox," Sandoval tells Seven Days inside his studio while standing next to a gold-painted horse skull. His accent is strong, and so is his conviction. "I pay my taxes, but I can't enjoy the social guarantees of this country."

Sandoval says he's experienced prejudice and discrimination since moving to Vermont. But rather than letting bigotry sour his American experience, it fuels his art — namely his band's forthcoming debut album, Historia de un Inmigrante (Story of an Immigrant).

Mal Maiz celebrate their four-year anniversary on Friday, August 25, at Nectar's in Burlington.

Sandoval is a lifelong maker of music and visual art. He grew up in an artistically inclined household and studied arts and humanities throughout high school and college. Before moving to the United States, he freelanced as a bassist in multiple projects in Costa Rica. Sandoval also worked for Martin Professional, a company that produces concert lighting and practical stage effects.

He may not have ended up in Burlington if not for a long-standing friendship between his partner, Maria Carvalho, and local soul musician Kat Wright. Wright and her husband, Lee Anderson — proprietor of Burlington's Radio Bean, ¡Duino! (Duende) and the Light Club Lamp Shop — met up with Sandoval and Carvalho while vacationing in Costa Rica in 2013. Anderson and Sandoval hit it off immediately.

"It was so easy to become friends with him," Anderson says. "He's such a hardworking artist. That's something I really appreciate: when someone's not afraid to put in a vast amount of physical effort."

Wright and Anderson lobbied for Sandoval's move to Burlington, since he and his partner were looking to relocate to the United States. The first incarnation of Mal Maiz was born later that year during Radio Bean's annual birthday bash. Anderson helped Sandoval source musicians for the inaugural run. Saxophonist Jake Whitesell — who plays in Wright's band — has been a member since day one.

"It was exciting," Whitesell writes in an email to Seven Days. "He taught us a bunch of songs [and sang] all of the horn parts to us, which we attempted to quickly figure out and memorize."

Mal Maiz officially came together over the next year with a rotating cast of seven to 10 players. Anderson granted them a weekly Monday-night residency at Radio Bean called Latin Sessions. They mixed joropo, merengue, mapalé, rumba, batata and other rhythms with the familiar strains of jazz and funk that Burlington thrives on. But their signature style is cumbia. The Colombian genre blends indigenous and Spanish influences and dominates Central and South America. It's a danceable, festive rhythm, incorporating brass, accordion, percussion and stringed instruments.

"I try to offer a show that's not just one thing," says Sandoval, who primarily plays guitar. Mal Maiz are known for "cumbia-fying" popular tunes, such as Black Sabbath's "Iron Man."

"We were really open to mixing things," says Sarah Griffin, a former band member. "We all come from a variety of backgrounds."

"People would show up with, like, a drum," he says. "The word 'session' was a little confusing for people."

"Now I'm in a totally different era," he continues. "I feel more focused. Not doing a residency gives me more time to create."

Lately, Sandoval has been fixated on his debut, which the band recorded at Concordia University in Montréal with producer Joël Denizot, a Vermont native and former employee of the Charlotte-based world-music label Cumbancha. Guitarist Graham Lambert composed two of the tracks and charted the entire album.

Through seven songs, Historia de un Inmigrante tells the story of an unnamed immigrant and the challenges he faces in the United States. It begins with "Country Cumbia," in which our protagonist travels to America in search of a new life. He arrives in a city on "Cumbia Clandestino," a cosmopolitan-sounding number that mixes klezmer scales with Latin rhythms. The song contains a warning: "Watch out for 'migra,'" the Spanish slang term for U.S. Immigration and Customs Enforcement.

"Fantasma," a subsequent track, translates to "ghost" in English. It explores the album's primary theme: feeling like a specter when everyone else is corporeal.

"It's how we, as immigrants, feel sometimes," Sandoval explains.

The sounds of tropical rainstorms, hooting monkeys and squawking jungle birds are looped throughout the record — all of which Sandoval recorded himself in Costa Rica. The natural sounds of his country become another instrument.

"I feel like in [Latin American] culture, we embrace our connections with our ancestors," he says. "It's a relationship with death that's very different."

Skulls and other Day of the Dead imagery are recurrent visual themes in Sandoval's art.

Though the album is completely recorded, mixed and mastered, Sandoval is still working out the finer points of distribution. The Burlington Record Plant is set to press 300 copies, and the album is tentatively scheduled for a September release.

Sandoval's impact on Burlington's scene is vast. He was Anderson's right-hand man during the construction of the Lamp Shop and later served as bartender. The master of cumbia has introduced cultural concepts and obscure subgenres not only to his various collaborators but also to the city.

"There wasn't a Latin-cumbia-gypsy-punk band — something that's like a hybrid — in Burlington," Anderson says. "I think the scene was hungry for it. It was something unfamiliar."

"He's the best bandleader that I've ever had," says Griffin. "He's clear about what's expected, but he's also relaxed and flexible, which is really refreshing."

"Mal Maiz was my life from the second I moved to Burlington until I started Skeleton Dancer," she says. "[We] definitely take elements. I got really into rumba through that band."

Sandoval considers exploring English lyrics for his next album. But right now, he feels it's important for everything to be in Spanish as a way of elevating non-English speakers.

"I was having a hard time trying to [decide] if I should assume a political position," he says. "[But] I feel like I'm voicing the immigrant movement.

"As an artist, it's really hard not to be involved in what's happening right now," he continues. "I try to embrace other immigrants [so] they don't feel ashamed of where they come from."

The original print version of this article was headlined "Ghost Story"