Mailing It In: A Q&A With Secretary of State Jim Condos 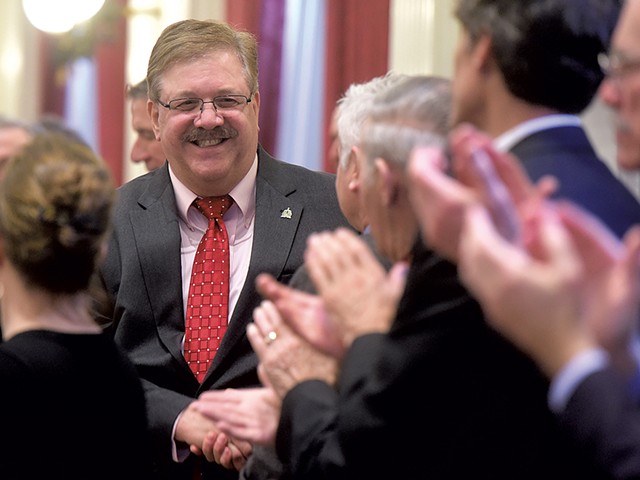 Most Vermont voters typically cast their ballots in person on Election Day, but things are shaping up differently this year. Record numbers of Vermonters have requested absentee ballots for the primary, likely due to concerns over the spread of COVID-19.

To understand the impact of this shift, we turned to Secretary of State Jim Condos. His office oversees Vermont's elections. The Montpelier Democrat is also on the ballot — he first won the post in 2010 — though he doesn't have a Democratic primary challenger.

SEVEN DAYS: Are absentee ballots counted by machines or by hand?

JIM CONDOS: It depends. For both primaries and general elections, absentee ballots are treated like any other ballot. Vermont has 135 towns that use automated tabulators, which represent about 80 percent of the statewide vote, and 111 mostly smaller towns that hand count.

SD: Are absentee ballots counted in advance or on election night?

JC: It's in statute that they can be counted the day before the election. This year we're issuing a directive that allows clerks to begin processing absentee ballots 30 days out from the election, but there will be strict regulations on how they do so. If a town uses a tabulator, once they start the process, they will be unable to tell who is winning or losing. The results aren't known until the tabulator is closed out on election night.

SD: Should we expect results by the end of election night?

JC: You should never expect to have the final results. You can expect unofficial results by the end of election night. By statute, we don't certify results until seven days after the election is over.

SD: In a typical election, what percentage of absentee ballots are spoiled because they arrived too late or the voter didn't follow instructions?

JC: I can't give you an exact number, but Vermont's rejection rate is less than 1 percent. What rejects a ballot is if John Smith voted absentee and didn't sign his name on it. Or if he didn't use the security envelope, or he neglected to fill out the required information on it. Or we have it in our system that he submitted an absentee ballot and then tried to submit another ballot. But we don't receive many ballots after the election is over.

SD: If a voter loses or never received their absentee ballot, can they still vote in person?

JC: Yes. If someone shows up at their polling place and says they never received or lost their absentee ballot, the poll workers can look it up. Every absentee ballot that's returned gets recorded and dated. The poll worker can see whether their ballot was received. If the record shows it was not, they will give you another ballot.

SD: Can voters verify that their town clerk received their ballot?

JC: The Vermont Secretary of State website has a "My Voter Page," or MVP, where voters can enter their name, birthdate, and driver's license number or last four digits of their Social Security number. The MVP will list the voter's last known residence, who their town clerk is and what district they're in. Voters can pull up sample ballots, order absentee ballots and track when their order came in, when the town clerk processed it and when the clerk received it back.

SD: For the primary, your office sent postcards asking voters to request absentee ballots. For the general election, you plan to just send ballots to all registered voters. Why two different procedures?

JC: First, the primary turnout is typically only 20 to 25 percent of the total voter checklist, so it's significantly lower than the general election. Second, even if we had wanted to mail ballots to voters for the primary, we couldn't have because we weren't prepared to do so. There were too many logistical challenges for us to just turn on a dime for the primary.

JC: We've been operating under two principles: One, that every registered voter has the right to cast a ballot; and two, to protect the health and safety of voters, poll workers and town clerks. Because of that, we've been working on processes that drive down the number of in-person voters.

SD: So it's preferable to have Vermonters vote absentee?

JC: From the standpoint of health and safety during this crisis, yes. We've already delivered infection prevention kits to all polling locations in Vermont. They include hand sanitizers, disinfectant wipes, face masks, gloves and face shields. Polling places will also receive a second kit for the general election that will include additional supplies.

SD: Should Vermont permanently switch to voting by mail?

JC: Currently, five states do it that way: Washington, Oregon, Utah, Colorado and Hawaii. Oregon has been doing it since the late 1990s, and Washington since the early 2000s, so it's not something new and it shouldn't be a partisan issue. It's more expensive because of the cost of postage, as well as printing additional envelopes. But it's not costing the state anything additional this year because we received $3 million in federal CARES Act money, as well as another $3 million in federal Help America Vote money. Though some lawmakers want to know whether we should make this procedure permanent, I've said that that's a discussion for after this election, when we'll have more information on the total costs.

JC: It varies. People have told me that it's so nice to be able to sit at their kitchen table with a laptop and pull [up] the different candidates and their policy positions and decide who they want to vote for. You can't do that at a polling location. Some people like it; some people don't.

SD: Does voting by mail benefit a particular party or candidate?

JC: No, there's no evidence of that. The Brennan Center for Justice did a study showing that absentee voting doesn't benefit either party.

SD: How do absentee ballot requests this year compare to previous years?