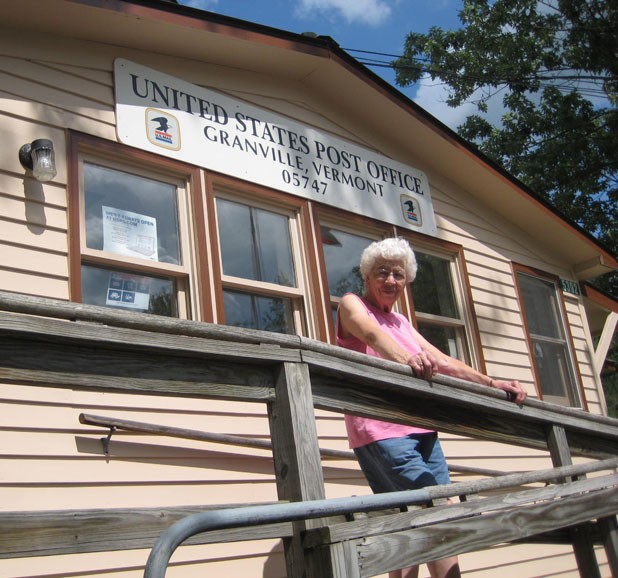 Not everyone can say they have a post office in their house. But Pete Parrish can. In the front room of her clapboard, cream-colored home, where the foyer might be, stands a bank of metal post-office boxes and a gray laminate counter that was recently lowered to be accessible to those using wheelchairs. Instead of family photos on the wall, there’s a bulletin board advertising Avon cosmetics and charity suppers. Behind the counter, where you might normally find the living room, are the postmaster’s desk, some plastic postal bins and an old filing cabinet.

Playing host to a post office might be inconvenient for some people. Not for Parrish. It’s a joy, she says, and not just because the walk to get her mail is about 10 steps. Having the post office in her house means that Parrish, 81, is helping to provide a vital community service. But perhaps not for long.

The Granville post office, which has made its home in Parrish’s house since 1963, is one of 14 Vermont post offices that stand at risk of closure after the United States Postal Service announced in late July that it would be “right-sizing” — not downsizing — its network of retail outlets. Of the 32,000 retail postal offices around the country, the USPS singled out nearly 3700 to be studied to determine if closure is appropriate. The “expanded access study list” includes rural mail outposts that don’t generate enough revenue, as well as redundant urban offices. There are five post offices in jeopardy in New Hampshire, 34 in Maine and 112 in New York.

“The United States Postal Service is in a dire financial position,” explains USPS spokesman Tom Rizzo. “They have to do something to address these tremendous losses.”

The Vermont congressional delegation has roundly opposed the proposed closures, writing in a letter to the Postal Regulatory Commission that rural post offices are “often the heart and soul of the town.”

“Many of these post offices have been in continuous operation for over 100 years and are an essential part of the fabric of Vermont’s rural landscape,” the letter continues.

Here’s how Parrish came to have a post office in her living room: In 1963, a man arrived in the village of Granville in a blue-and-white car and began knocking on doors. Parrish assumed he was selling vacuum cleaners. When the man finally knocked on her front door, she told him she wasn’t interested. She already had a vacuum cleaner, thank you very much, and she didn’t need another.

But the man wasn’t selling vacuum cleaners — or anything else. He was a United States Postal Inspector looking for a new town postmaster. He told Parrish the previous postmaster had reached the age limit for the position — at that time, 70 was the cutoff. He asked Parrish if she’d like the job. She didn’t hesitate.

Parrish accepted the position on a Tuesday; by Saturday of the same week, the post office had been moved from the old general store and installed in her house.

Parrish — whose real first name is Alice, though no one calls her that — is a spunky octogenarian with silky white curls on her head and a bit of a wild streak in her heart. She loves snowmobiling and used to be into motorcycles. She’s not at all worried about speaking her mind.

She took to the job of postmaster immediately, despite having had little training. “I was up for the challenge, you might say, of learning the trade. Because that’s what it is — a trade,” she says, sitting at a picnic table in her backyard in the shadow of Old 60 Hill.

Parrish isn’t sure exactly why her name was put forth as a candidate for the postmaster position back in 1963. But she guesses it had something to do with a survey earlier that year on whether to close the post office. Granville residents were asked to vote on whether to move their post office to a substation in nearby Rochester, keep it in town or shutter it altogether. Parrish remembers being adamant that the post office remain in Granville. Every town should have a post office, she said — even one with just 300 people.

Parrish and her husband, Bill, built their house in 1950. In the early days of their marriage, the couple ran a small grocery store from the front of their house, but after closing it in the late 1950s, they converted the storefront back to residential space. When the postal service came calling, they remodeled again. Since then, the USPS has paid the Parrishes rent for the space.

Parrish loved the customers and knowing she was providing a community service. She didn’t love counting stock, but it was a necessary part of the job. At the beginning of her tenure, she told herself she wouldn’t stay in the position for 36 years like her predecessor. But three decades passed before Parrish felt the urge to retire.

Back when Parrish was the salaried postmaster (don’t call her postmistress), things were a lot busier at the Granville post office than they are today. Everyone sent their packages by parcel post, because shipping giants UPS and FedEx didn’t exist yet. People wrote letters and cards. Stamp collecting was big. There was a lot to do.

Still, every two or three years, Parrish recalls, the USPS threatened to close the Granville post office. “They’d say, ‘We have to save money and close the smaller offices,’” she says. “But the small towns are where you need them.”

Parrish always viewed her customers as her neighbors and friends. As such, she went out of her way for them. If Parrish got a knock on her door after-hours from a neighbor late to get his mail, she was happy to open up, especially if that mail was a box of bees or baby chicks.

In 1992, Parrish took a buyout. Her husband had retired the year before, and she wanted to spend time with him. Since then, the office has had four different postmasters. The current one, Nancy Demers, has been on the job for three and a half years.

The average day at the Granville post office seems sort of slow. Demers can’t confirm that, since talking to the media is verboten for postal employees. But Kathy Werner, Granville town clerk, can.

“Most of the time when I’m in there, I run into one other person,” Werner says. “But it’s not hugely busy.”

Around 3 p.m. during the school year is when the tiny office sees peak traffic. The school bus stops out front, and kids run into the post office to grab the family’s mail from their P.O. boxes. The rest of the day is pretty sleepy.

Like Parrish, Werner laments what the town will lose if the post office closes. Most of the retail outlets on the list of proposed closures would ideally be replaced by a Village Post Office, part of USPS’s network of satellite operations inside existing businesses such as pharmacies, grocery stores and gas stations, explains USPS spokesman Rizzo. The problem with Granville is that it doesn’t have any of those establishments. So residents would probably have to pick up their mail, buy stamps and ship packages four miles away in neighboring Hancock.

Besides the town office, the post office is really the only gathering place in Granville. It’s a little hub, says Vivian Branschofsky, a town selectperson. The post office is where neighbors catch up on town news — who’s sick, who’s away, who’s had a death in the family. And, in a town already short on services — there’s no school or rescue squad — the void would be felt.

“It would be a big loss,” Branschofsky says.

But the post office can’t survive on nostalgia alone. It has to earn more of its keep. Parrish knows this, she says. Still, it hurts her to think of the post office disappearing.