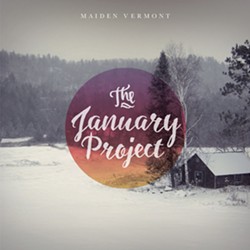 Sibling duo Maiden Vermont cover familiar territory for fans of indie folk on their debut EP, The January Project. It's hard to move a foot in Vermont without tripping over an indie band, but Ethan and Jacob Tischler's combination of intriguing harmonies, jazz-influenced orchestration and stripped-down, reedy vocals will win over those who need to freshen up their Spotify playlists.

The album opens with "In Motion," a wistful track delivered in an Avett Brothers-style croon. The lyrics are fairly stock-in-trade for the genre — a melancholy love song — but the song's careful crescendo lends poignancy to what could collapse into cliché. The violin part in particular shines and fleshes out the sound of the track.

The Tischlers choose an oft-covered favorite for the EP's second song, Leonard Cohen's "Hallelujah." This is one of their strongest performances, in part because of the brilliance of Cohen's original lyrics. The two lure the listener with deceptive simplicity. But the track also showcases Maiden Vermont's biggest strength: their raw, organic harmonies. They lack the polish of some of their more commercial counterparts — comparisons to Bon Iver or Ben Howard seem inevitable. But that sweet spot of tight orchestration and vulnerable vocals is exactly where their charm lies.

"Without Even Trying" skews more toward jazz than the rest of the EP; it struggles to find its feet until the chorus and those harmonies come in. Again, the song rides mostly on its musicality, and the lyrics seem like an afterthought. But even as the EP's Achilles' heel, the song is still enjoyable.

"When I Come Home" is a Broadway-esque slow build to a theatrical, soaring finale. One of the EP's strongest vocal performances, the song is the perfect closing track, touching on the themes of home and belonging that tie the whole EP together. When the Tischlers sing, "Nowhere to run, / I've had enough running," they bring the listener home with them.

The January Project is an uneven debut and at times sounds derivative. But Maiden Vermont don't pretend to be anything they aren't. They're at their best when they play to their strengths — musicianship and a disarming vulnerability. And those surprising moments of abandon when their voices soar make it worth a listen for any indie-folk fan.

The January Project by Maiden Vermont is available at soundcloud.com/maidenvermont.