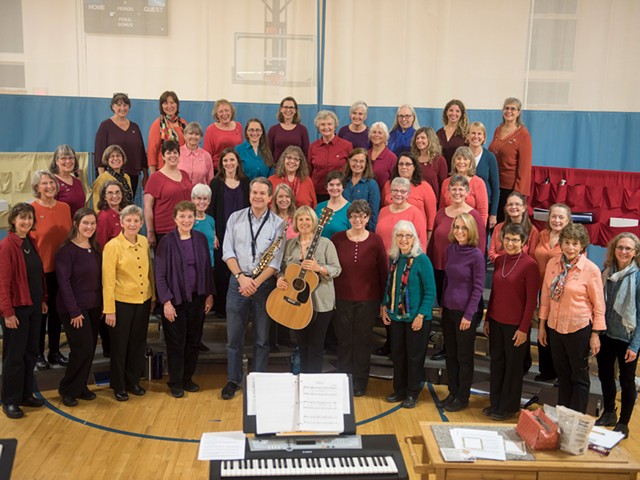 But the genre looks quite different at the Salisbury Community School gym every Thursday night. The weekly rehearsals for Maiden Vermont, an Addison County-based barbershop chorus, draw more than 40 women of all ages.

At a recent rehearsal, they're dressed smartly in black pants and blouses the colors of fall leaves. They stand on risers facing folk singer Elisabeth von Trapp, who is strumming an acoustic guitar. Just back from a four-week bike trip around Europe, she is scheduled to appear with Maiden Vermont on November 12 at Middlebury's Town Hall Theater.

The singers warm up with a mournful rendition of the Beatles tune "Things We Said Today," accompanied by Richmond musician Chris Peterman on soprano sax.

This room full of (mostly) women is a love fest. After the last warm chord of "My Favorite Things," von Trapp looks at the Maidens with adoration. "That exquisite combination, there's nothing like it. Except riding tandem in Italy with this guy," she says, gesturing to her husband on the sidelines.

Next, von Trapp leads the singers through a medley of "My Country, 'Tis of Thee" and "Edelweiss." It's enough to make you feel a twinge of patriotism.

"Oooh, that was so pretty," gushes Lindi Bortney, the silver-haired dynamo director taking notes beside von Trapp. Bortney founded Maiden Vermont in 2004 as a barbershop group that rehearsed in an actual barbershop. "It was serendipity," she recalls.

Bortney and her husband, composer Jerry Shedd, had recently retired to the Middlebury area from Long Island, where she had worked as a high school choral teacher. The musical pair appeared in the Middlebury Community Players' production of The Pirates of Penzance. Word about Bortney's experience quickly got out.

The California native earned her master's in music theory and composition at the University of Wisconsin-Madison. She discovered her true love — tight, four-part harmonies — while directing a junior high school boys' chorus on Long Island. Bortney went on to direct women and girls in the same style (often referred to as "Sweet Adeline"). She herself sang in the Ramapo Valley Show Chorus, a three-time international champion in barbershop competitions.

In Vermont, at the request of a Penzance cast mate, Bortney began teaching doo-wop to a small group of local actors. She enjoyed the experience so much, she decided to do what she really loves: direct women's barbershop.

"We put something in the paper, calling all women, but we didn't have a place to have it. The high school was booked," Bortney says. "I was having my hair done, and I looked at the woman and said, 'Why don't we do it here?'"

Thirteen women and girls — including five mother-daughter duos — showed up for the first rehearsal, which was held after hours at a now-defunct salon called Court Street Hair Designs.

After about a month, Bortney scored the group a more permanent rehearsal space, at Bingham Memorial School in Cornwall. (They relocated to Salisbury two years ago.) Their first performance was at a Rotary talent show. "We were beat out by a woman who could hypnotize a chicken," recalls Bortney, laughing.

A few years later, the Maidens got a big gig at First Night in Rutland. Preparing for it "was an awakening, because I'd come from Long Island," says Bortney, referring to Vermont women's typical makeup-free look. "I said, 'You guys are going to fade out. You have to put on some lipstick or something. There was one tube of lipstick for 30 women."

The group now contains more than 40 women, including three of the original members. Singers drive from as far as Colchester, Rutland and Middletown Springs to be part of the chorus. And they're still not so big on lipstick, says Bortney.

Barbara Marlow sings the always-tricky baritone. "It's fun to learn," she says. "We performed a piece called 'The Baritone Blues,' because we never get the melody. It's fun because it's also often what I would call 'icky notes,' the close harmony that characterizes barbershop."

"It's a real challenge to know where you fit in the chord," adds Laurie Cox, who sings bass.

Cox and Marlow, like many Maidens, have long been devoted to the group. Both joined more than a decade ago. Cox has served as president for the past three years. Maiden Vermont has charitable nonprofit status and, in addition to performing several gratis shows each year, gives annual scholarships to local college-bound students planning to major in vocal music, musical theater or music education. Other gigs are paid, however, and members of the group pay a modest $120 per year in dues.

Maiden Vermont is audition based. "If you love to sing, can sing on pitch and can hold a part, join us!" the group's website declares. The members meet weekly for two-and-a-half-hour rehearsals. Bortney selects the music.

What makes the women stick with the group long-term?

"We love music; we love to sing," says Marlow. "But also, it's multigenerational. It's a way to know people whose paths might not otherwise cross. And we have Lindi, who inspires us all."

"It's a real community," adds Cox.

And they've had memorable performances. In 2010, Maiden Vermont sang the American and Canadian national anthems for a crowd of 35,000 at Fenway Park. The lead-up was stressful, recalls Bortney; they didn't know until three weeks before the game that they had been selected to sing.

"But it was worth it, just to be standing there by home plate," she says.

The group also regularly sings at naturalization ceremonies. "Those are really moving," says Marlow. And, every February 14, Maidens deliver singing valentines around the community.

"When they were building the Champlain Bridge," recalls Marlow, "we sang to one of the welders, on the job, [and] gave him chocolate."

"Being inside of those chords when they ring is just transcendent," raves Bortney about barbershop music. "And it's more than the music. It's the friendship and the love and all that. When you do classical music, your eyes are glued here [on the music stand], but this — you're communicating with the audience; you're taking on a character you want the audience to feel."

The original print version of this article was headlined "Harmonizing Women: The 'Barbershop' of Addison County"