Magic Mann Serves Up CBD-Infused Takeout and Education in Essex

A few years ago, my go-to café updated its menu with an option to add CBD to its coffee drinks. Wow, you can put CBD in anything these days, huh? I thought to myself, politely declining the legal version of a hipster speedball. Since then, the variety of cannabidiol tinctures, oils, capsules, topical salves and infused edibles on the market has exploded, making my earlier thought seem pretty naïve.

CBD has become commonplace. People use the nonpsychoactive chemical compound to help with anxiety, epilepsy, insomnia and chronic pain. But until I went to Magic Mann in Essex, I'd never had it in a root beer float or a cup of matzo ball soup.

Magic Mann bills itself as "Vermont's first canna-café." While many businesses around the state offer CBD products on their menus, no one is infusing its menu — and entire business model — quite like this.

"What gets people stressed out about cannabis is getting the opposite effect of what they expect." Meredith Mann tweet this

Prior to starting her own company, Magic Mann cofounder and CEO Meredith Mann was a dispensary supervisor. She's also a longtime medical marijuana patient and has amassed decades' worth of anecdotal and lived experience with cannabis.

"I had to make my own medicine for a long, long time," Mann, 50, explained. "I wanted a better platform to be able to talk to people and give them the information that I had, and I just felt like taking a risk."

Magic Mann first launched as BTV Local 420 with her brother, Brian Drourr, in April 2019. The cannabinoid edible and event business worked out of a commercial kitchen in South Burlington's Chittenden Cider Mill. As the company started to outgrow that space, it also evolved into Magic Mann, a rebrand to give it broader appeal.

Around the same time, the COVID-19 pandemic gave the team time to think creatively about the future of the business. When an opportunity to open in the Essex Experience arose, they jumped on it. "This place is really changing around, and it had the magic I wanted," Mann said.

Magic Mann completely transformed a former Gymboree outlet and opened for business on January 14 this year. Launching during the pandemic was a conscious choice, Mann said. She and her team saw a clear and immediate need in the community for two things: takeout food and CBD. Magic Mann combines the two and also serves as a resource for customers to learn about the cannabis world, no matter their previous experience or reason for seeking it out.

"Usually, when people are asking a question about cannabis, it's personal," Mann said. "To walk in somewhere and say, 'I'm anxious' or 'I'm depressed' — it's an honor to have people trust me enough to be able to help them."

Much like the name, the shop itself doesn't scream "cannabis." Sure, there are weed-shaped Adirondack chairs in one corner, but the space is closer to a sleek boutique than a typical dispensary or head shop. The experienced staff takes a budtender approach, educating customers about dosing and potential effects of various products.

Customers who are new to cannabis, scared of its potential effects or even against using it are among Mann's favorites, she said: "My approach is really to listen and see what they need. We're not doctors, and we're not pharmacists, but we have a lot of information to share."

Magic Mann sells its own line of full-spectrum CBD products, including edibles, tinctures, dog biscuits, pre-rolls and topical salves made in the on-site kitchen. The company is currently partnered with Essex-based Farm Fresh Hemp, infusing its CBD into an olive oil or coconut oil base for most products. The shop also offers CBD products from other local producers.

On the café side, the business cooks up a full menu of savory and sweet dishes — infused or un-infused — ranging from Buffalo chicken mac and cheese and aptly named pot pies to brownies made from Mann's grandmother's recipe.

To be safe, I ate a few items that day and spread the remainder out over the rest of the week. Mann later told me that 50mg of CBD is the "sweet spot," or the average dose that most customers seek out. It's OK to exceed that amount, she said — some customers can handle eating up to 1,000mg if they've worked their way up to it. 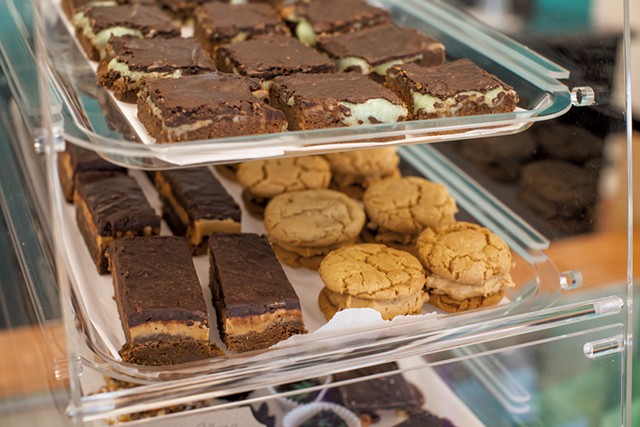 But because the products are full spectrum (which contains small amounts of all of the compounds found in the cannabis plant, including terpenes, and up to 0.3 percent THC), it is possible to overdo it "and find yourself like, whoa," as Mann described. She further explained that, while CBD can sometimes make you sleepy, it's also a stimulant and can help you focus.

"What gets people stressed out about cannabis is getting the opposite effect of what they expect," she explained. "If somebody takes CBD and gets that uppity, racy feeling and they wanted to relax, then that's going to stress them out. Or, if you eat a cannabis product to focus and it makes you sleepy, then you're stressed."

The delivery vehicle — eating something fatty, such as mac and cheese, versus sucking on a lollipop — can alter CBD's effect, as can one's body chemistry, Mann said. She looks at cannabis as a medicine cabinet, with different products filling specific needs in terms of timing and desired effect.

It was reassuring to have that clear dosing information — printed on the menu, my receipt, and most of the products themselves — compared to most of the homemade cannabis-infused edibles I've had in the past, where dosing is a guessing game and you have to trust that whoever made them isn't bad at math.

Another benefit of Magic Mann's well-crafted, CBD-infused takeout is the taste: Nothing had the overwhelming, hard-to-mask flavor that I've always associated with eating cannabis. Sipping on the smoothie and the Rookie's float, the only hint that anything was in there were the stickers on the cups that read, "Contains CBD." (And maybe the iridescent paper straws.)

In fact, it's just good takeout. The hemp salad — chopped into easy-to-eat bites in a nod to Mann's other grandmother, who "hated having to shove lettuce in her mouth," Mann said with a laugh — was hearty and fresh. In addition to hemp leaves and hearts, it contained romaine, kale, carrots, red onion, cucumber, goat cheese and a tangy maple-balsamic dressing. The infused garlic croutons were so tasty that I wished I'd bought a whole bag of them to up my salad game at home.

Many items, including Mann's matzo ball soup — which she made for Burlington's Sadie Katz Delicatessen back in the day — are available without CBD, too. The baked goods are the café's top sellers, but the soup has a "cult following," Mann said. I tried it on a return trip, and it's safe to say she can add me to the cult.

As the weather warms and summer approaches, Magic Mann is expanding its on-site seating — both indoors and out — and adding to the menu. Made-to-order grilled cheese sandwiches, infused or un-infused, with Vermont cheddar, pesto or Buffalo chicken will be available soon. So will ice cream, sold through a walk-up window during concerts and events on the Essex Experience green.

Mann hopes to move from pandemic-era grab-and-go items into a full-spectrum café, including brunch — complete with mocktail Bloody Mares garnished with candied bacon and a CBD joint — and cannabis cooking classes.

To celebrate its second anniversary, Magic Mann is currently taking preorders for a 4/20 infused dinner, with smoked meats, classic barbecue sides, dessert and a whole bottle of infused barbecue sauce. Mann's business partner, COO Brian Armstrong, will be smoking the meat on-site — something they hope to continue through the summer.

The celebration includes a raffle to benefit the Magic Mann Global Indigenous Fund, an ongoing fundraising campaign in collaboration with the Pennywise Foundation in Richmond to support the Nulhegan Band of the Coosuk-Abenaki Nation's food and education drive. The business also donates 5 percent of its net profits to the fund as part of its social mission.

In the future, Mann hopes her business will be among the first in the state to hold a recreational marijuana license, though the Essex community has not yet voted on whether to allow recreational sales of THC products. For now, she's happy to have the support of the community for the business' CBD offerings and to see the stigma of cannabis disappearing.

"People are much more comfortable walking in the door now," Mann said. "Everybody just walks in with pride."