Magic Hat Produces Its Own Energy -- With Beer 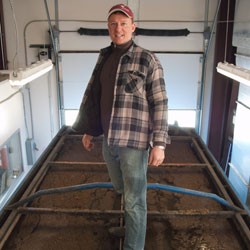 For Eric Fitch, beer isn’t just about drinking; it’s about energy. Specifically, the energy that can be produced from a brewery’s spent grain and yeast. Harnessing that power had eluded renewable energy experts until Fitch, founder and CEO of Massaschusetts-based PurposeEnergy, Inc., figured it out.

Since July, Magic Hat Brewing Company in South Burlington has hosted Fitch’s technological innovation, the nation’s first digester for byproducts of beer fermentation. PurposeEnergy’s patented anaerobic digester takes the leftover grain that would otherwise be discarded and breaks it down into methane. That methane can be used to power the brewery’s boiler and other systems that run on natural gas.

For years, farms have used agricultural digesters to create energy from waste. Fitch, an MIT-trained engineer who has experience with numerous startups, figured the process would work for beer waste, too.

But when he went looking for the appropriate digester, Fitch found it didn’t exist. So, with the help of a scientist in Florida, he created his own at a nearby Yuengling brewery.

Ultimately, though, Fitch needed a larger facility closer to home, where he could demonstrate the scalability of his technology. He chose Magic Hat because it’s the right size — the brewery produces 154,236 barrels, or 4.8 million gallons, per year. By the end of 2011, Fitch hopes to start shopping the technology around to larger brands such as Coors and Anheuser-Busch.

Every day, Magic Hat generates 42,000 pounds of spent grain — and 30,000 gallons of wastewater — that need to be disposed of. The solids can be used as feed for farm animals, but more often they are picked up by a waste hauler at great expense to the company. The cost of managing beer waste can rival a brewery’s energy expenditures.

Fitch reasoned that, if spent grain could be used to make methane, which the brewery could buy back, it would save the company money and ease the strain on the local wastewater system. That’s how he sold the idea to Magic Hat.

The pitch was convincing, recalls Steve Hill, spokesman for North American Breweries, the Rochester, N.Y.-based company that bought Magic Hat in 2010. “Our initial thought was that it would save us a boatload of money,” Hill says.

In 2010, Magic Hat’s estimated wastewater bill was $200,000. Hill figured that an investment in Fitch’s tech would pay off if it saved the company that sum and some of its energy costs.

PurposeEnergy worked with Magic Hat to install a digester with a 460,000-gallon capacity, as well as a 1600-square-foot plant and pumphouse, which Fitch’s company is leasing for the project. The brewery pays PurposeEnergy to process the used grain, which is turned into energy — enough to light nearly 1000 homes — and sold to Green Mountain Power. Then GMP sells the electricity back to Magic Hat.

During the six months the digester was operational — it has been offline since December for upgrades — the benefits to the brewery were clear, Fitch says. Magic Hat didn’t have to worry about its wastewater, sewage costs went down, and the gas it was consuming was renewable.

PurposeEnergy’s project is funded in large part by equity investors. The company has also received renewable- energy stimulus money through a treasury department grant, as well as an $850,000 loan from the Vermont Clean Energy Development Fund — the largest ever granted, according to Andrew Perchlik, the fund’s director.

Fund administrators viewed the beer-waste digester project in the context of local economic development. They also liked the project because it enhanced Vermont’s status as a national leader in digesting technology, Perchlik says.

Magic Hat’s leadership, too, sees beyond the financial gain.

“This anaerobic digester is the first of its kind, and it’s cool to be a part of something that is still experimental,” Hill says. “This is our first really big green initiative. And being green, it’s like a necessity at this point.”