Made in Secret, Iranian Film 'There Is No Evil' Is a Sweeping Moral Epic | Movie+TV Reviews | Seven Days | Vermont's Independent Voice

Made in Secret, Iranian Film 'There Is No Evil' Is a Sweeping Moral Epic 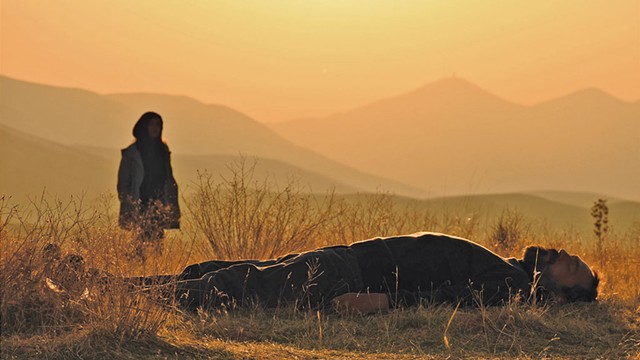 Our streaming entertainment options are overwhelming — and not always easy to sort through. This week, I watched There Is No Evil, which won the Golden Bear at the Berlin International Film Festival weeks before the coronavirus outbreak shut down all such events.

Iranian director Mohammad Rasoulof (Manuscripts Don't Burn) made the anthology film in secret while appealing a prison sentence for making movies that the government deemed "propaganda against the system." As of an interview with Filmmaker magazine in May 2021, he was still free and working on his next film, though dogged by ominous updates from the authorities. You can see There Is No Evil via Vermont International Film Foundation's Virtual Cinema through June 30.

There Is No Evil is composed of four short films that share a common theme but no characters. The first (and titular) film details a day in the life of a family man (Ehsan Mirhosseini) who seems normal and pleasant in every way. (He literally saves a cat!) The surprise comes at the end.

In the second film, "She Said, 'You Can Do It,'" set in a prison, a young military conscript (Kaveh Ahangar) tries desperately to get out of his assignment to execute a condemned man at dawn. His refusal to kill contrasts with the attitude of the more jaded soldier (Mohammad Valizadegan) at the center of the third film, "Birthday," whose priority is getting three days' leave so he can propose to the woman he loves (Mahtab Servati).

Finally, the long-term consequences of such choices become clear in the fourth film, "Kiss Me," in which a German college student (Baran Rasoulof) visits her Iranian relatives and learns a family secret.

There Is No Evil keeps surprising the viewer. Watching the first film — a drab, meticulous and devastating slice-of-life drama — in no way prepares us for the action-packed climax of the second film or the pastoral beauty and romanticism of the third one.

As the movie goes on, its settings shift, too, from the cramped urban cars and apartments of "There Is No Evil" and the tense chamber drama of "She Said, 'You Can Do It'" to the wide-open spaces of the last two chapters. "Birthday" takes place in lush green woods, with water (purifying, cleansing, mourning) as a recurrent motif. "Kiss Me" unveils a barren yet breathtaking mountainscape haunted by wolves.

Yet all four parts circle the same dark reality: State executions are commonplace in Iran. Though the guilt or innocence of the condemned people isn't central to the film, "Birthday" makes it clear that ideological dissidents are often among them. To refuse to perform an execution — like Pouya, the protagonist of the second chapter — is to risk joining their ranks.

Another constant in the film is stellar acting. If Rasoulof's plots sometimes seem a touch programmatic or reliant on coincidence, they're inhabited by characters who are fully human. In the first film, for instance, Mirhosseini endures the ups and downs of family life like a classic sitcom dad, with a bemused, amiable passivity that makes the story's twist both fitting and shocking.

Pouya, the conscript who refuses to kill, is initially a more off-putting character: He whines, schemes and even weeps, making us wonder if his fellow soldiers are right to dismiss him as shirking responsibility rather than making a meaningful statement. Watching this segment of There Is No Evil, I found myself realizing that American movie viewers, at least, have been conditioned to assume heroes must be stalwart and stoic, while cowards are sloppy and emotional.

That's not the case in Rasoulof's world. In this movie, resistance can be awkward and messy, while stoicism is sometimes the refuge of those who choose to tolerate the intolerable.

What about those who don't? We gradually learn that the rural landscapes of the last two films are places of exile, refuges for people who refuse to comply with the regime — like the island where director Rasoulof himself now lives, according to Filmmaker. (Read the interview for fascinating details of how he managed to camouflage this film's production, including a scene shot in a busy grocery store.)

While There Is No Evil is certainly a film about what Hannah Arendt called the "banality of evil," it also affirms and embodies the opposite possibility — in Rasoulof's words from the interview, "the beauty in spite of the hardship of resistance and saying 'No.'" Right now, that's a message of relevance to everyone.

The Salesman (2016; Amazon Prime Video, rentable): The nature of culpability is also a central question in this Oscar-winning film from Iranian director Asghar Farhadi (A Separation), in which a married couple struggles with the aftermath of an assault.

This Is Not a Film (2011; Kanopy, Mubi, the Criterion Channel): Iranian filmmaker Jafar Panahi made this documentary about his experiences under house arrest in secret and smuggled it to the Cannes Film Festival in a birthday cake.

Offside (2006; rentable): There Is No Evil shows how Iran's mandatory military service works as a tool of social control. In this film from Panahi, banned in Iran, conscripted soldiers help a group of female fans sneak into a World Cup soccer match from which they're barred because of their gender.

Movie+TV Reviews There Is No Evil Mohammad Rasoulof Staff Picks