Made by an Indigenous Cast and Crew, 'Reservation Dogs' Is a Family Show in the Best Sense | Movie+TV Reviews | Seven Days | Vermont's Independent Voice

Made by an Indigenous Cast and Crew, 'Reservation Dogs' Is a Family Show in the Best Sense 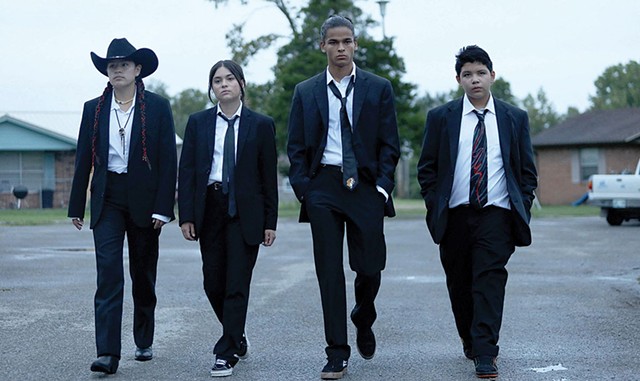 Indigenous Peoples' Day is coming up, but I admit I wasn't thinking about that when I watched "Reservation Dogs," an eight-episode series that features an all-Indigenous lineup of writers, directors and regular cast members. I watched it because Taika Waititi (What We Do in the Shadows), who cocreated the series with Oklahoman filmmaker Sterlin Harjo, is immensely talented at crafting deadpan comedies with heart. This show, produced by FX and streaming on Hulu, is no exception.

United by friendship and petty crime, four teenagers have a single goal: to earn enough money to leave their life on the "rez" in rural Oklahoma. Their dream destination: California.

The pilot episode introduces us to our four protagonists: Bear (D'Pharoah Woon-A-Tai), a lanky dreamer who fancies himself the leader of the group; Elora Danan (Devery Jacobs), a sullen cynic with a tender heart; Willie Jack (Paulina Alexis), a loose cannon with the elliptical speech patterns of a street tough; and Cheese (Lane Factor), a quiet, thoughtful kid with a gift for unexpected zingers.

The kids pull off the heist of their lifetimes (so far) when they steal a delivery truck and sell it to the shady owner of the local salvage yard. They sell off and gobble the truck's contents — spicy potato chips — but soon find themselves having regrets, not to mention heartburn. As the four gather to remember their friend Daniel, who died a year ago, they learn there's a new gang of badass teens in town, the NDN Mafia — and it's gunning for them.

The show's title is a cheeky nod to Quentin Tarantino's breakout film, Reservoir Dogs, and the pilot episode visually references that crime classic when the foursome don matching black suits to honor Daniel. The parodic parallel is a fun gimmick, but "Reservation Dogs" leaves behind its heist-movie homage after the pilot. The series' real focus is not crime but community — the very community that the characters feel desperate to escape.

That wider focus becomes evident in the second episode, "NDN Clinic," when Bear heads to the reservation clinic after a brawl with the NDN Mafia. His friends join him, and people of all ages wander in and out of the story — some with funny roles to play, others with poignant ones, all embodied by actors so talented that it's hard to believe we haven't seen most of them before.

Gradually and subtly, the show makes a case for the vibrancy of this community. The tribal cop, Officer Big (Zahn McClarnon), who came off as a dim-witted antagonist in the pilot, becomes a full-fledged, sympathetic character by the fifth episode, "Come and Get Your Love," which features flashbacks to his own youth and his encounter with a supernatural avenger called the Deer Lady. It's one of several episodes devoted to intergenerational communication, the vital passing on of knowledge from the community's elders to the teens, who are more receptive than they want to admit.

In this sense, "Reservation Dogs" is very much a "family show," despite featuring F-bombs galore, illegal behavior and some goriness involving a very fake piece of roadkill. It's also a comedy show that bears no resemblance to a sitcom except the run time. Each tightly scripted half-hour episode packs in throwaway observational humor, satire, surrealism and moments of drama that are no less powerful for being understated.

Viewers of Jojo Rabbit know that Waititi likes to use absurdist humor rather than overt messaging to make his points. While the protagonist of that movie had an imaginary Hitler as his mentor, Bear sees visions of a "Spirit" (sketch comedian Dallas Goldtooth) who wears Hollywood-style "Indian" garb and claims to have been killed at the Battle of Little Bighorn. "The spirit world. It's cold. My nipples are always erect," he laments with the delivery of a modern stoner.

It's a funny recurring gag, but, like most of the adults in the show, even the Spirit ends up having decent advice to impart. And his exaggerated inauthenticity reinforces one of the underlying themes of "Reservation Dogs": These are people who have been robbed of much of their heritage. The defiant "Land Back" graffiti seen throughout the show doesn't let viewers forget the broader historical and political context.

In about four hours, "Reservation Dogs" builds such a complex world — comic and tragic, realistic and surrealistic, silly and heartbreaking — that a binge is sure to leave viewers wanting more. Luckily, there's another season on the way.

Mekko (2015; Tubi, rentable): This indie drama from series cocreator Harjo about an ex-con living on the streets of Tulsa, Okla., mixes realism and mysticism and features "Reservation Dogs" cast members in major roles.

Blood Quantum (2019; Shudder, AMC+, rentable): Indigenous filmmaker Jeff Barnaby made this novel twist on a zombie movie, in which the inhabitants of a Mi'kmaq reserve in Québec discover they're immune to the plague turning white people into the walking dead.

"Trickster" (2020; the CW, Shudder, AMC+, Sundance Now): Featuring many Indigenous cast and crew members, this CBC teen supernatural drama drew controversy over its cocreator's heritage, but reviews suggest it's worth a look.